"We are born into this": Meet the First Nations leader who defeated a mining behemoth

Marilyn Baptiste on the fight to defeat one of British Columbia's biggest, and destructive, mines 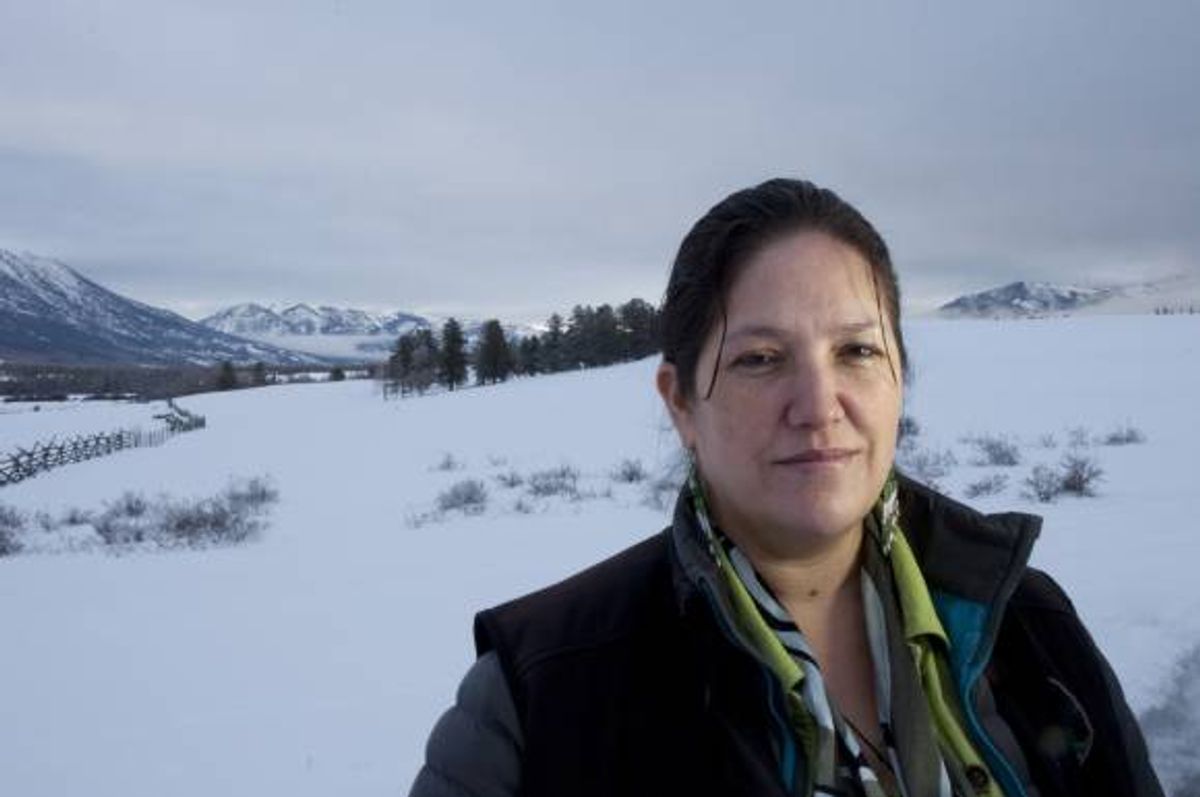 Even in a region known for massive, potentially havoc-wreaking open-pit mines, Prosperity Mine, one of the largest ever proposed in British Columbia, stood out. In order to build the gold and copper mine, Vancouver-based Taseko Mines Limited planned to drain nearby Fish Lake, home to the Xeni Gwet’in, or Nemiah Valley Indian Band, one of the six communities that form the Tsilhqot’in Nation.

That the mine was never built is thanks in large part to the efforts of Marilyn Baptiste, the tribe's elected councillor and former chief, who led efforts to convince the Canadian Environmental Assessment Agency (CEAA) of the spiritual, environmental and economic importance of the Nemiah Valley. It was an ugly, years-long battle, but TML's efforts to exploit the land were eventually blocked not once, but twice, by the federal government.

Baptiste hardly sees herself as an activist. "As most indigenous peoples around the world, since contact we’ve had to protect our land, our people, our way of life and our future generations," she told Salon. "This is part of our everyday life, this is what we live and we breathe."

This past April, Baptiste was nonetheless awarded the Goldman Prize, the world's largest environmental prize, for her work organizing her community in opposition to the mine and, when it came down to it, acting as a one-woman blockade against construction crews. You can learn more about her story in the Goldman video below; read on for Salon's conversation with Baptiste, which has been lightly edited for clarity:

Can you tell me a little bit about your history in this area and about Fish Lake’s importance to your community?

I was born in Williams Lake and I grew up in the Chilcotin most of my years, probably from age 3 or so in the Nemiah Valley. My dad was chief since before I was born, so I was very fortunate and we grew up on the land there with our people. We were out on the land, we were hunting, fishing. Our parents brought us out camping all the time and we learned to fish with a dip net on the rivers for wild salmon. We all learned from a very young age about our war leaders, about our ancestors who protected our land and who have always protected our land. So I understand full well our responsibility to protect our land, our waters and our future generations. The land is there for us, to provide for us, and we are there to protect it.

Has there been a long history of protecting the land against external threats coming in, or has it traditionally been more about promoting good environmental stewardship?

As with most indigenous peoples around the world, since contact we’ve had to protect our land, our people, our way of life and our future generations. The year 1864 is one of the greatest examples of that, when our war leaders stopped a road crew from coming in from the southwest side of the Xeni Gwet’in territory. They were after gold back then and again in this issue and this fight, they were after gold on the southeast side of the Yunesit’in caretaker area, which is on the south side of the middle of the Chilcotin. Back then, too, not only were they after gold but in their plight to pursue the gold was the smallpox epidemic that they brought in to wipe out our people -- and not just the Tsilhqot’in, but all indigenous peoples.

There’s a scene in the Goldman video where you’re standing in front of a truck and blocking it from coming in. Were you thinking about that parallel to 1864 at that time?

Oh, most definitely. Previous to the 2010 panel process, there was some exploratory work that was done. We were advised legally not to interrupt their process, and were told they were just doing this little bit of drilling for the information for the panel process. It was very, very hard for us all to stand down and not interfere. When we defeated the company in 2010 through the Federal Environmental Assessment process, they came back around a few months later with their second proposal based on Alternative Two. The previous panel in 2010 and the federal government as well as the company all agreed that Alternatives One and Two are worse than the one they denied in that assessment. They said they were going in to do more exploratory drilling. It was not something that I was willing to allow and neither were my people. Our people were not willing to allow that to happen again because if we just keep allowing that to happen, they’ll just continue to run roughshod over our people and our land and our future generations.

To back up a little bit, can you tell me more about when the mining company first came in? What specifically are the threats from a mine like this that you’re concerned about?

The specific threats that our people are concerned about are simple. First of all, our land is not for sale. Second of all, that kind of destruction to our land, our hunting grounds, our gathering grounds, our waters, is not acceptable. It is something that would never be able to be reclaimed, even though they suggest that they can. After they’re done with digging this three kilometer-wide open pit and putting a tailings facility into the wetlands that would be there forever, that can never be reclaimed.

Are you opposed to the development of any mine at all, or is there a way that you think this kind of development can be done safely? Is it the big open pit mine that you’re most concerned about?

I think that basically to answer that question, I would have to be able to go through the processes a little more in depth to look at their mining procedures and processes and outcomes and the whole nine yards. It doesn’t matter what type of mining it is, the technology has to be able to improve their practices and furthermore, the governments have to reform their policies and regulations. The Mount Polley dam breach, of August 4, 2014, is the simplest example. They were warned two years prior and they did nothing, is what I’ve been told. If they had done something, perhaps that breach would never have happened. And the New Prosperity tailings facility was modeled upon that Mount Polley tailings storage facility.

Is there any kind of system right now where you’re consulted or asked to weigh in on proposed mine? Or is this completely activism on your part, your coming out and demanding a say in what’s going on?

It’s interesting in that perspective because as indigenous peoples we are born into this. This is part of our everyday life, this is what we live and we breathe. So it’s hard to imagine ourselves as activists. It’s just our duty and responsibility and where the governments are not recognizing indigenous rights and title is something that has to change also. Because there are international standards and there’s a thing that is called the United Nations Declaration on the Rights of Indigenous Peoples that has done a lot of great work. There are standards to be met around the world that mining companies need to get in line with as well as the governments. The governments say that we don’t have a say, but I haven’t seen any bill of sale that the Canadian government or the British Columbia government has received or shown to say that they have worked with us as Tsilhqot’in people. We have not ceded or surrendered our rights or our title to anyone.

What is the state of this battle right now? Is the company still attempting to build a mine? It seems like the kind of thing where you can’t ever really rest easy and assume that they aren't going to try again.

People know you never let your guard down, you have to be on guard. That’s why I say we were born into this, we breathe this, we live it. But the company has received their rubber stamp extension from the B.C. government, which is very disturbing in all matters of the fact because that doesn’t show any kind of environmental stewardship on behalf of B.C. The company slapped the Wilderness Committee with a defamation suit in 2012 and they just went through the final arguments. They’re waiting for the judgment in that matter. They are currently trying to go into the south Taseko Mountains on the very top of the mountain, wanting to drill 50 drill holes in the area where the waters run down into the upper Taseko Lake. That is a serious issue and that is a serious concern to our people, our elders back home, and that’s a no-go zone area. That shows you the kind of working relationship or lack of and a very high disrespect from the mining companies, as well as B.C., I have to say.

One other thing I really wanted to ask you was a little bit about what you’ve learned from being involved in these fights and what advice you might have for other people who are facing similar threats?

What have I learned?

I know, it’s a big question.

It is, and there could be many answers, but one of the things I have to say -- and this is what I kept saying through the fight -- is we as indigenous peoples, whether it be Tsilhqot’in or others, we have come so far forward, we have been trying to work with government and industry and yet we are dealing with the government and industry from back in the 1700s and 1800s. Their policies and processes must change. They have to reform their mining laws and their processes because this is not acceptable and B.C. is not for sale.