Tyson, Pilgrim’s, Sanderson Farms and Perdue treat contracted farmers like garbage and Congress is doing nothing 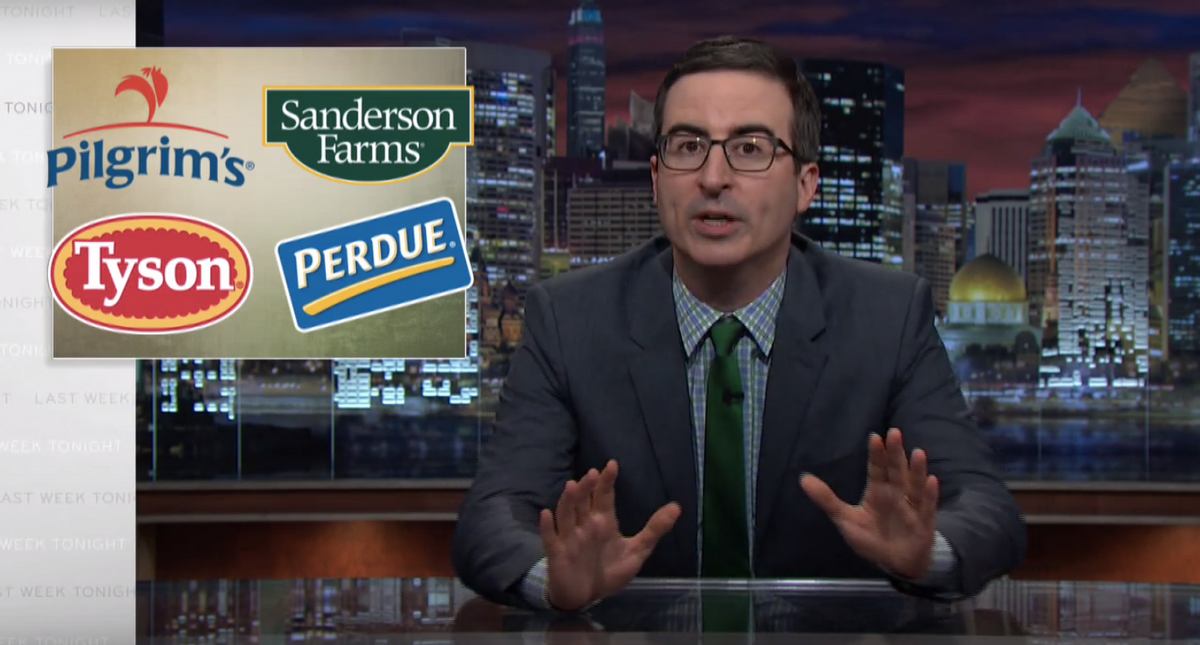 Most poultry industry conversations tend to focus on animal cruelty (and for good reason), but John Oliver decided to turn his attention to the human cruelty involved in the industry on Sunday's "Last Week Tonight."

Oliver took aim at the big four poultry corporations – Tyson, Pilgrim’s, Sanderson Farms and Perdue — which have ceaselessly treated their contracted farmers like garbage, bullying them into corporate upgrades and sending them well below the poverty line.

This culture of fear and bullying starts to make sense when you consider the overwhelming demand for chickens: Americas eat 160 million chickens per week -- and ninety-seven percent of chickens are produced by contract farmers.

Oliver was shocked to learn just how indecent National Chicken Council spokesperson Tom Super was in his defense of "Big Poultry" and its abusive practices, though.

Asked point-blank about small farmers being forced into poverty in a recent conference, Super responded: "Which poverty line are you referring to? Is that a national poverty line, is that a state poverty line?"

"The poverty line is like the age of consent," Oliver fired back. "If you find yourself parsing exactly where it is, it you’ve probably already done something very, very wrong."

Oliver had many delightful analogies to better contextualize the horrors of the poultry industry, suggesting a better name for it would be an "agricultural Glengarry Glen Ross" or "Hengarry Hen Ross." Also, in discussing the increasing corporate demands for upgrades, Oliver turned to a favorite punching bag, James Franco.

"Farming chickens is like hooking up with James Franco," Oliver said. "Look, James. First you wanted us to try nipple drinkers (which was weird, but I put up with it). Then it was the tunnel house which was even worse. And now, you want us to try blackout curtains? No, James! No. I'm out."

In closing, Oliver encouraged viewers to add "chicken-f*cker" to any of the legislators' Wikipedia pages who voted down regulations protecting farmer rights.