"Mad Men" saved resolving Peggy's love life for the finale, because we're more invested in Stan than her career 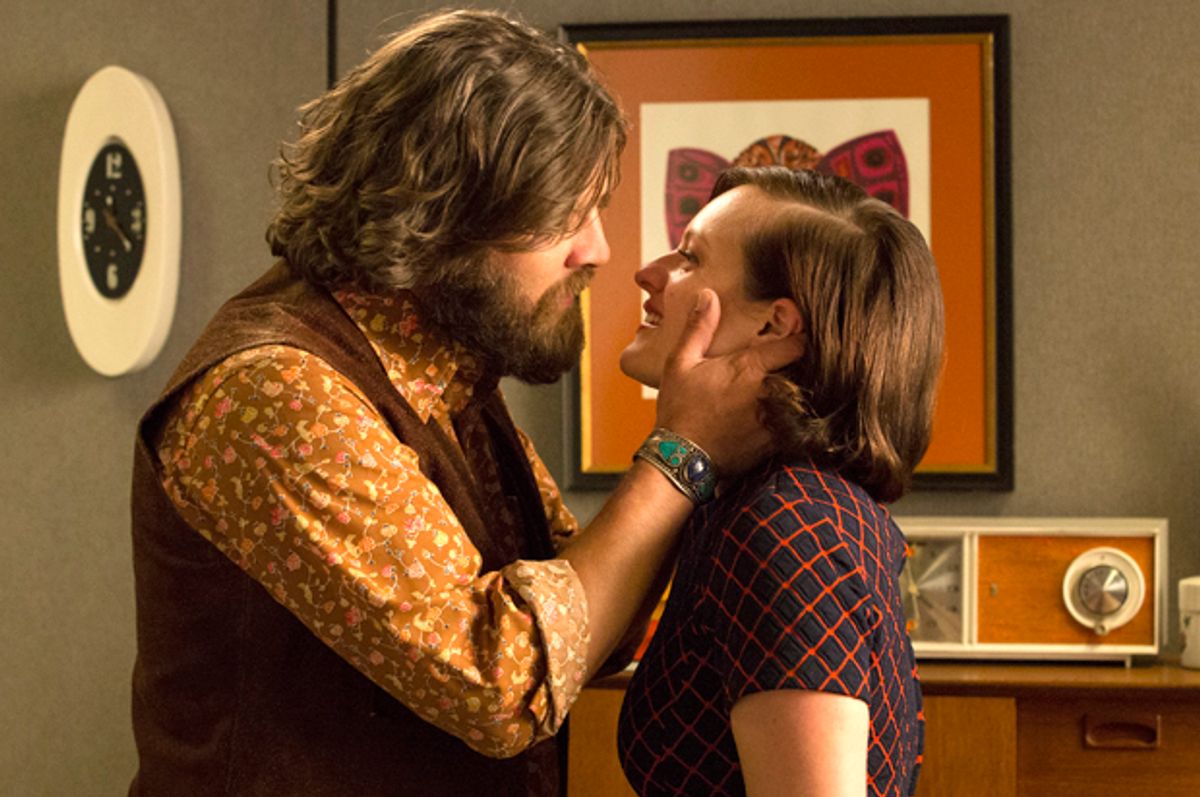 I first began learning about that crazy little thing called love in high school during AP English class. It started with Edna St. Vincent Millay’s poem “Love Is Not All,” which very logically lists things that love isn’t. Love isn’t food, and it can’t raise sunken ships (or men). I liked Millay’s pragmatic approach because it somehow justified why I preferred books to boyfriends, and removed unnecessary pressure in relationships. I reckoned that love probably wouldn’t put me through college or get me a job, and that I should probably focus my attention elsewhere by very neatly categorizing affections. In the nearly 10 years since, I’ve realized that love and relationships are far more complex, usually raising more questions than answers on nights of endless frustration. “What are we even DOING?”

Yesterday, a study was published in Nature that seeks to explain the purpose of the existence of men. My friends, many women before me, including the characters from “Sex and the City,” have been wondering this for years, and lo! It seemed science had finally arrived at an answer. Researchers at the University of East Anglia used 50 generations of beetles to examine how sexual selection prevents a species from extinction, and believe that more options increase survival rates.

Fair enough, but I couldn’t help wondering why we even bother with romance if all we’re supposed to do is breed. I think most hope to serve a larger existential purpose, and our culture seems obsessed with finding greater meaning -- one might even say happy endings to our stories.

The “Mad Men” finale is a nice example. Peggy solidified her status as a badass in the penultimate episode of the series, strutting into McCann Erickson with swagger and aplomb. By all means, she achieved the professional fulfillment she sought throughout her career; things could’ve ended nicely for Peggy right there. And yet, she and Stan (finally) uniting was almost equally satisfying. But why? Science!

Apparently, it's human nature to lust after love stories, especially on-screen, psychologist Dr. Jared DeFife explained to Huffington Post. We empathize with characters involved in will-they-won’t-they relationships, like Stan and Peggy — not to mention Carrie and Mr. Big, Meredith and McDreamy, Blair and Chuck — and use these examples to rationalize our own unsmooth courses to love. “Romantic tension over the course of a series or over the course of a novel or set of novels that’s unresolved keeps our interest,” DeFife told HuffPo. “We keep playing it out in our heads. It keeps our engagement going with it cognitively.”

For Peggy and Stan, the romantic implications were always just below the surface: the late night phone calls, his humor balancing her bossiness, eyes locking and lingering from across the room. Throughout the course of the show, their ever-evolving relationship was both relatable and aspirational, and it was comforting to see two characters come together so naturally.

Television (and maybe contemporary culture) has arrived at an age that seems to shy away from traditional expressions of romance. Maybe we’ve replaced love at first sight with lust at first swipe on Tinder, and are too jaded by technology to believe in something so romantic as fate.

ABC’s “Once Upon a Time” centered this season on characters seeking happy endings for both heroes and villains. From Prince Charming and Snow White to Robin Hood and the Wicked Witch of the West, fabled figures fought desperately to rewrite their destinies. It used to be that princesses were saved while dragons were slayed, but it seems we’ve reached a moment in which characters are revealed to be equal parts beauty and beast. The stories have evolved with the complexities of the characters who seem every bit as interested in love as they do power.

Millay ends her sonnet by writing that for everything love is not, she wouldn’t trade it because of everything that it is. Most times it seems like tap dancing in a minefield as television (and we) exist as both authors and characters in love stories, but I’ll be damned if it’s not worth it.