O’Reilly on Waco bike gang murders: Here’s everything that’s wrong with how the media covers race and violence

On Fox, cops and now biker gangs get to have a few “bad apples” who cause trouble. African-Americans? Not so much 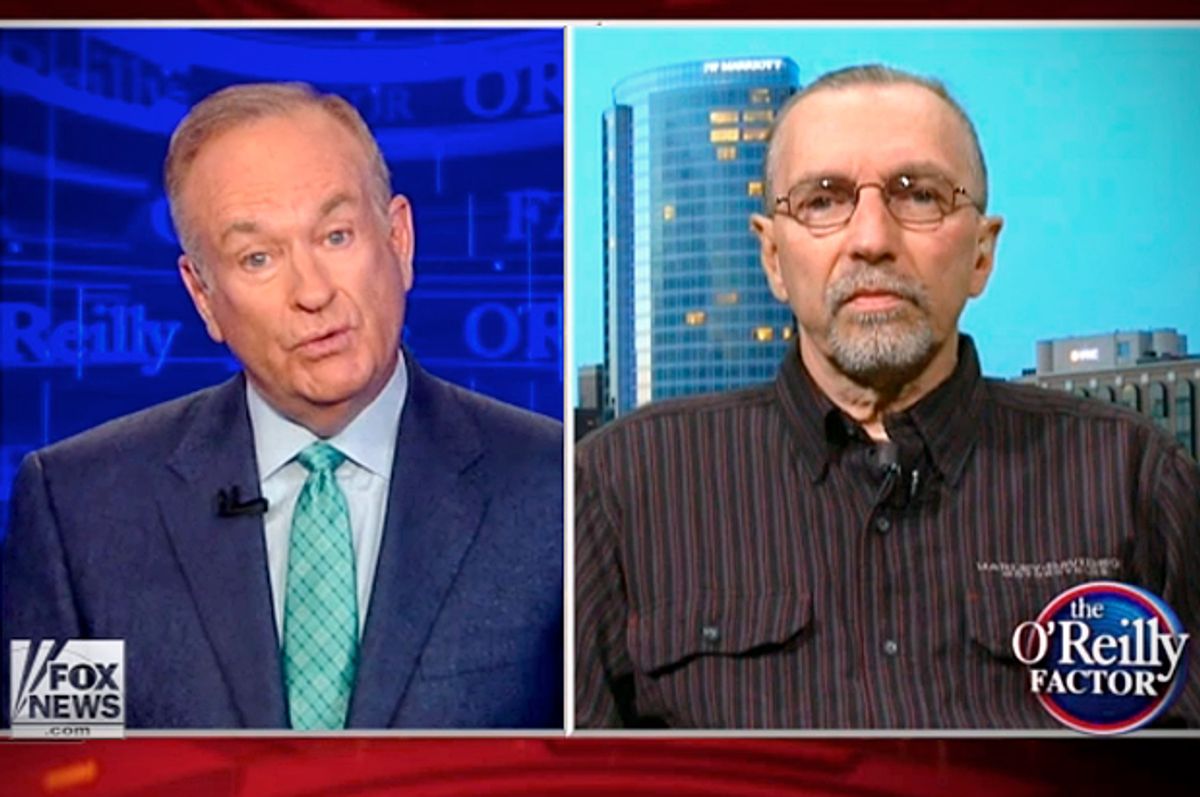 If you want to understand what drives many of us crazy about the coverage of the surreal and brutal violence in Waco last weekend -- when nine people were killed, 18 wounded and 170 arrested in a brawl between rival biker gangs -- your one-stop shop is Tuesday night’s “O’Reilly Factor” on Fox.

O’Reilly hosted a clinic on how to explore bad behavior by a group of people, without insinuating all of the people in the group are bad. He interviewed white former biker gang member Edward Winterhalder, to talk about biker culture and mores. It stood in sharp contrast with his interviews strafing African American leaders for the crimes of other African Americans.

Winterhalder is a former "associate" of the Bandidos gang (they clashed with a rival gang, the Cossacks, in Waco). The FBI says the two are among several notorious "Outlaw Motorcycle Gangs," which it calls "highly structured criminal organizations whose members engage in criminal activities such as violent crime, weapons trafficking, and drug trafficking.”

You'd never know that watching O'Reilly. He did ask his guest about claims by police that the Bandidos are “a big drug dealing outfit.” He let the ex-Bandido answer at length, without interruption.

“There is a lot of different types of individuals in a motorcycle club," Winterhalder told O’Reilly. “Sixty to seventy percent are just regular guys who have jobs, families, and kids ... the only thing they're guilty of is having a little too much fun on the weekends.”

Then the Fox host pushed a little: “You didn’t commit any crimes?” Interestingly, Winterhalder didn’t answer directly. It’s hard to imagine O’Reilly letting, say, a black ex-gang member duck the question. Again, the Bandidos guest got to wax philosophical, even psychological, without interruption.

“Everybody gets involved because of the camaraderie and the brotherhood and the love of Harley Davidsons to start with. But they’re searching for the love they didn’t get in their childhood. Or they’re trying to find something that they had in the military: camaraderie and brotherhood.”

I can see O’Reilly’s audience getting a little teary, thinking about these bikers who didn’t get enough love in their childhood.

Even Papa Bear seemed affected by the tale, but he quickly composed himself: “OK, I don’t wanna glamorize this crew because obviously, you saw what happened in Waco.” Then he asked about crime again, noting that even if 60 percent of the Bandidos are law-abiding, by his guest’s estimate, “that leaves 40 percent doing crimes against the country.”

Again, Winterhalder defended the group. “There is a minority of the club that’s committing crimes, and it’s disorganized.” He admitted to witnessing some petty crime, including fights, while a member, but said fights were "almost always defensive.” According to O’Reilly’s guest, the Bandidos and Cossacks fell out over the Cossacks demand to include a Texas patch on their jackets, when the Bandidos seemed to believe they had the Texas franchise exclusively. Or something.

“Isn’t that a little insane, to lose your life over a jacket?” O’Reilly asked, ever the voice of reason. “Yes. It’s like going back to first grade, a couple of bullies on the playground,” his guest agreed. Satisfied he’d narrowed the miscreants to “a couple of bullies,” O’Reilly wrapped the segment: “We appreciate the insight, and thank you.”

Throughout the interview, the Fox bully treated his biker guest with respect, and let him talk uninterrupted. Media Matters contrasts that with O’Reilly’s many interviews with African Americans on the issue of urban violence, when he treats his black guests like piñatas, and forces them to answer for the worst behavior of their entire community.

When music mogul Russell Simmons showed up to discuss unrest in the wake of the decision not to prosecute any of the police who choked Eric Garner to death in Staten Island last year, O’Reilly went ballistic after Simmons called that and similar decisions "lightning striking the black community over and over and over again."

"I feel the same way about you, Bill," Simmons said.

Then O’Reilly pummeled Martin Luther King III after athletes wore T-shirts protesting police killings, telling him: “Here’s a pathway to success: Don’t abandon your children. Don’t get pregnant at 14. Don’t allow your neighborhoods to deteriorate into free-fire zones…That is what the African-American community should have on their t-shirts.”

Edward Winterhelder faced no such hectoring when he spent a segment with O’Reilly.

I apologize for writing about O’Reilly twice this week. But it seemed worth pointing out that on Fox, two sets of wrong-doers – bikers and cops -- get to claim that a few “bad apples” cause trouble, but the whole group doesn’t deserve blame.  Studies show watching Fox makes you less informed than watching no news at all. This is some of why.