Vote for me or you'll all die: GOP candidates wallow in the politics of fear 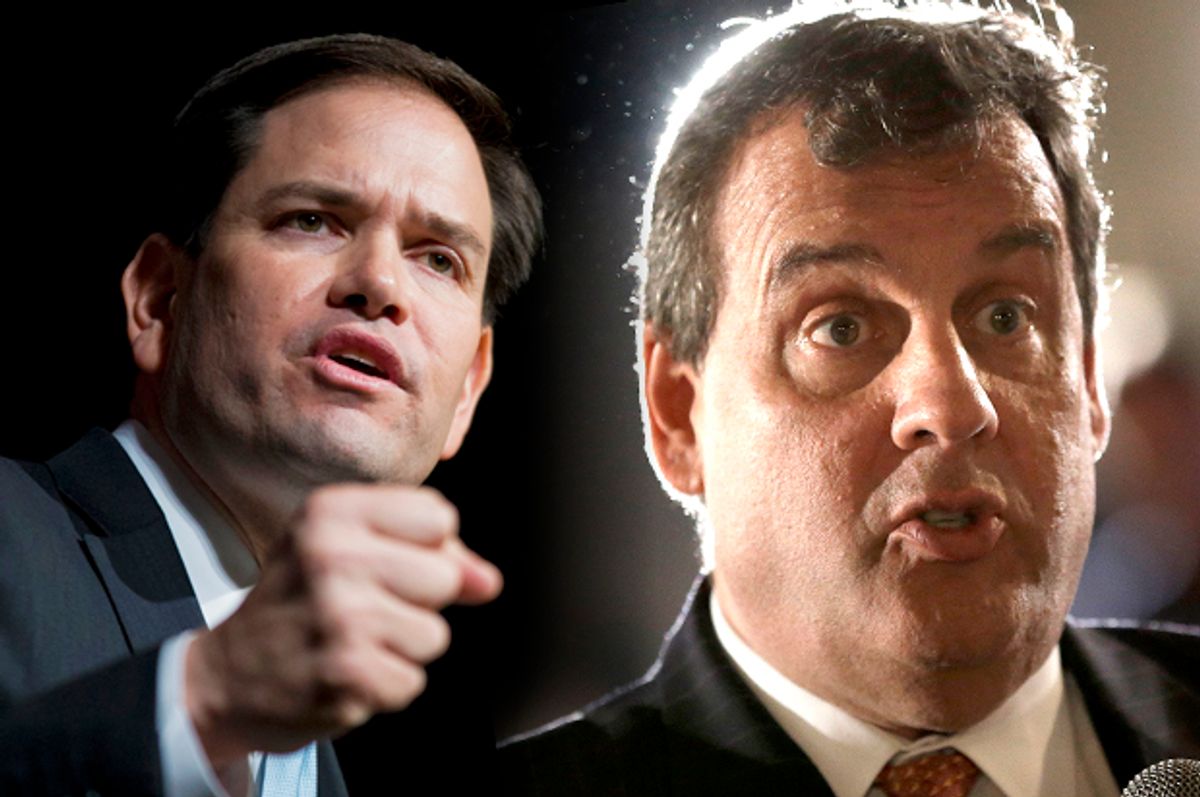 Marco Rubio and Chris Christie have a simple, terrifying message for 2016 voters: vote for me or there’s a fairly good chance you’ll die. They don’t phrase it that way, but it’s the unmistakable message they convey when they talk about national security. Rubio goes around telling people that “Nothing Matters If We Aren’t Safe,” describing this new slogan of his as “the fundamental problem in America.” Christie, meanwhile, went to New Hampshire this week and told voters that the “first obligation of the American government” is to “protect the lives of the American people,” and while some people may whine that their civil liberties are being curtailed in the process, “you can’t enjoy your civil liberties if you’re in a coffin.”

Well, I’m certainly terrified, but mainly of the frightening logic at play here. It harkens back to the creepy cult of “safety” that surrounded George W. Bush following the 9/11 attacks. Ask any Republican what Bush’s great accomplishment was during his time in office and they’ll likely respond with some version of “after 9/11, Bush kept us safe.” There are a number of reasons why that doesn’t make sense, “after 9/11” being the big one. Also, there were several terrorist attacks on the United States after 9/11 (the anthrax letters, the D.C. sniper, the 2002 LAX shootings, etc.), and Bush actually made the world more dangerous by invading Iraq and turning it into a terrorist training ground.

But “safety” became the go-to excuse for every civil liberty-shredding counterterrorism policy pursued by the Bush administration following 9/11. If you criticized warrantless wiretapping or extraordinary rendition or the bulk collection of phone data, then you were “yielding to the temptation to downplay the ongoing threat to our country,” as Dick Cheney put it. When I hear Christie framing the issue as one of “civil liberties” versus “you being dead,” it throws me right back to the early 2000s and Rove-Cheney politics of fear.

As for Rubio’s insistence that “safety” is the paramount concern of any policy question, the story of American national security has actually always been about the balance between security and the protection of civil liberties. The country’s history is dotted with instances in which presidents have made a highly controversial determination that liberties should be curtailed in the interest of safeguarding national security: Lincoln suspending habeas corpus during the Civil War, Woodrow Wilson’s Sedition Act, Franklin Delano Roosevelt interning Japanese Americans, etc. Each one of them could have argued their case by employing the same language that Rubio is using now: nothing matters if we aren’t safe!

The critical difference here is that the actions by Lincoln, Wilson, and Roosevelt were responses to national emergencies. Rubio wants this logic to apply all the time because, as he puts it, “the world has never been more dangerous than it is today.” I’m not sure how he reconciles that belief with his admiration of the Cold War-era presidents who spent each minute of each day dancing around the real possibility of global nuclear annihilation. But he’s not endorsing the idea of a balance between security and civil liberty – security forever and always trumps everything else in Rubio’s vision.

More to the point: Rubio’s own foreign policy is, like Bush’s, centered around the notion that America must expose itself to more risk and danger around the world. He said as much in last week’s speech laying out the “Rubio Doctrine,” which calls for aggressive interventionism:

As president, I will use American power to oppose any violations of international waters, airspace, cyberspace, or outer space. This includes the economic disruption caused when one country invades another, as well as the chaos caused by disruptions in chokepoints such as the South China Sea or the Strait of Hormuz.

Russia, China, Iran, or any other nation that attempts to block global commerce will know to expect a response from my administration. Gone will be the days of debating where a ship is flagged or whether it is our place to criticize territorial expansionism. In this century, businesses must have the freedom to operate around the world with confidence.

“Nothing matters if we aren’t safe,” says Rubio, who will embroil America in as many conflicts as he can in the pursuit of national security.

What remains to be seen is if naked appeals to fear like these still pack the same punch they did during the early Bush years. The country is far removed from 9/11 at this point, the Iraq War is over, the war in Afghanistan is winding down – it’s just not that easy to scare people anymore. What they should really be scared of is how comfortable these two would-be presidents are with trading away their rights in the pursuit of “safety.”