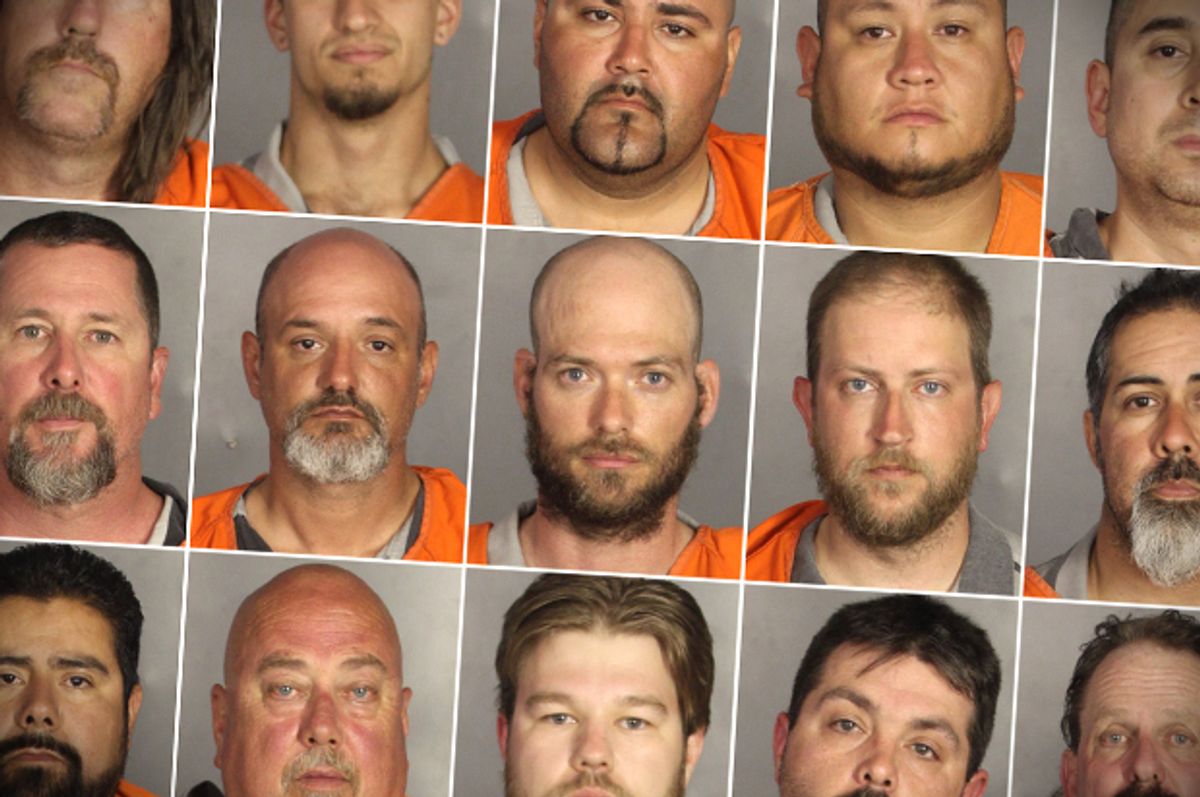 Booking photos of people arrested during the motorcycle gang related shooting at the Twin Peaks restaurant in Waco, Texas on May 17, 2015. (AP/McLennan County Sheriff's Office)
--

Malcolm X, the famed Civil Rights leader and minister of the Nation of Islam, would have turned 90 years old this week. While America annually marks the significance of the life of Dr. Martin Luther King, Jr., it is only in Black communities nationally, and locally in Harlem, that we mark and celebrate the birth of King’s most formidable racial adversary. Undoubtedly this has something to do with the very forthright and unflinching manner in which Malcolm X talked about race in the 1960s. El-Hajj Malik El-Shabazz, as Malcolm X was otherwise known, did not have any hope that white people could or would change when it came to race. Although King was far less optimistic at the end of his life about the capacity of white people to change, too, he still has the March on Washington speech, which represented the zenith of his racial optimism.

Malcolm X was different. His unflinching honesty about the evils of white racism made even King, formidable orator that he was, scared to debate Malcolm in public. Though he eventually toned down his rhetoric about the people that he was known to refer to as “white devils,” he never backed down from holding white people accountable for their investment in and perpetuation of white supremacy. For instance, in a 1963 public conversation and debate with James Baldwin, Malcolm X told him, “Never do you find white people encouraging other whites to be nonviolent. Whites idolize fighters. …At the same time that they admire these fighters, they encourage the so called 'Negro' in America to get his desires fulfilled with a sit in stroke, or a passive approach, or a love your enemy approach or pray for those who despitefully use you. This is insane.”

And indeed we did get a front row seat to such insanity this week, when three biker gangs in Texas, had a shootout in a parking lot that left nine people dead and 18 people injured. More than 165 people have been arrested for their participation in this thuggish, ruggish, deadly, violent, white-on-white street brawl but there has been no mass outcry from the country about this. Though these motorcycle gangs were already under surveillance because of known participation in consistent and organized criminal activity, as Darnell Moore notes at Mic, “the police didn’t don riot gear.” Moore further notes that “leather and rock music weren’t blamed,” and there hasn’t been any “hand-wringing over the problem of white-on-white crime.”

White people, even well-meaning and thoughtful ones, have the privilege of looking at deadly acts of mass violence of this sort as isolated local incidents, particular to one community. They do not look at such incidents as indicative of anything having to do with race or racism. But everything from the difference in law enforcement response to media response tells us what we need to know about how white privilege allows acts of violence by white people to be judged by entirely different standards than those of any other group. If a Black motorcycle gang had engaged in a shootout in a parking lot, any honest white person will admit that the conversation would have sounded incredibly different.

Frequently in conversations that I have observed or participated in with white people about race, the claim is levied that it is Black people “who make everything about race.” But this incident in Waco gives lie to that claim. It turns out that when white privilege is in clear operation, white people are invested in making sure that we don’t see race in operation. Charles Mills, a philosopher of race, has a term which I think applies here: epistemology of white ignorance. By this means, he means that white people have created a whole way of knowing the world that both demands and allows that they remain oblivious to the operations of white supremacy, that white people remain “intent on denying what is before them.” Thus even though three gangs have now attacked each other in broad daylight and killed or injured 27 people, there is no nagging, gnawing sense of fear, no social anxiety about what the world is coming to, no anger at the thugs who made it unsafe for American families to go about their regular daily activities without fear of being clipped by a stray bullet, no posturing from law enforcement about the necessity of using military weapons to put down the lawless band of criminals that turned a parking lot into a war zone in broad daylight. More than that, there is no sense of white shame, no hanging of the head over the members of their race that have been out in the world representing everything that is wrong with America.

That kind of intra-racial shame is reserved primarily for Black people.

Most white citizens will insist that this was just an isolated incident, even though the gangs were already under surveillance for consistent participation in criminal activity. And this studied ignorance, this sense in which people could look at this set of incidents and simply refuse to see all the ways in which white privilege is at play -- namely that no worse than arrest befell any the men who showed up hours later with weapons, looking for a fight -- returns me to the words of Malcolm X. For many Americans, this is just good ole American fun, sort of like playing Cowboys-and-Indians in real life. As Malcolm reminded us, “whites idolize fighters.” So while I’m sure many Americans are appalled at the senseless loss of life, there is also the sense that this is just “those wild Texans” doing the kind of thing they do.

White Americans might also deny the attempt to "lump them in" with this unsavory element. But the point is that being seen as an individual is a privilege. Not having to interrogate the ways in which white violence is always viewed as exceptional rather than regular and quotidian is white privilege. White people can distance themselves from their violent racial counterparts because there is no sense that what these "bikers" did down in Texas is related to anything racial. White Americans routinely ask Black Americans to chastise the "lower" elements of our race, while refusing to do the same in instances like this. Yes, white people will denounce these crimes, but they won't shake a finger at these bikers for making the race look bad. It won't even occur to them why Black people would view such incidents as racialized.

Such analyses are patently unacceptable. And they are possible because white bodies, even those engaged in horrendously violent and reckless acts, are not viewed as “criminal.” Yes, some police officers referred to the acts of these killers in Waco as criminal acts and them as criminals, but in popular discourse, these men have not been criminalized. Criminalization is a process that exists separate and apart from the acts one has committed. It’s why street protestors in Baltimore are referred to as violent thugs for burning buildings, but murderers in Waco get called “bikers.” And if thug is the new n-word (and I’m not sure that’s precise), then “biker” is the new “honky” or “cracker,” which is to say that while the term is used derisively and can communicate distaste, it does not have the devastating social effects or demand the same level of state engagement to suppress such “biker-ish” activity as we demand to suppress the activities of alleged “thugs” and “criminals.”

How we talk about and understand the problem of violence is actually critical to our ability to make any progress on solving the problem of racism in this country. We have turned the word “criminal” into a social category that acts a site of cultural refuse, where we can toss all of our anger, hatred, and resentment, on a group of people, disproportionately people of color, for abhorrent acts that they commit against us and the state. We get to view them as less than human and treat them as such, while acting as though our indignation is pure, righteous, and without hypocrisy. None of this is true.

With white citizens, officers feel it is their duty to protect the unsafe and de-escalate the situation. With Black citizens, officers, acting out of their own fear, escalate conflicts, antagonize citizens, and move swiftly to the use of tanks, tear gas, and billy clubs to subdue, even lawful and peaceful protests. What Malcolm X pointed to, and what we would do well to recapture on this week, as we, if we are brave enough, choose to remember his life, is that there is something fundamentally dishonest about a society that revels in the violence of one group while demanding non-violent compliance from another. That kind of thinking is unjust, unfair, and unproductive. And for those of us who are not white, white ignorance on these matters is not bliss.