Jeb's latest Iraq War lie: Placating the neocons by blaming everything on Obama

After getting pummeled on Iraq, Jeb Bush is trying to lie his way out of trouble and rewrite how the war ended 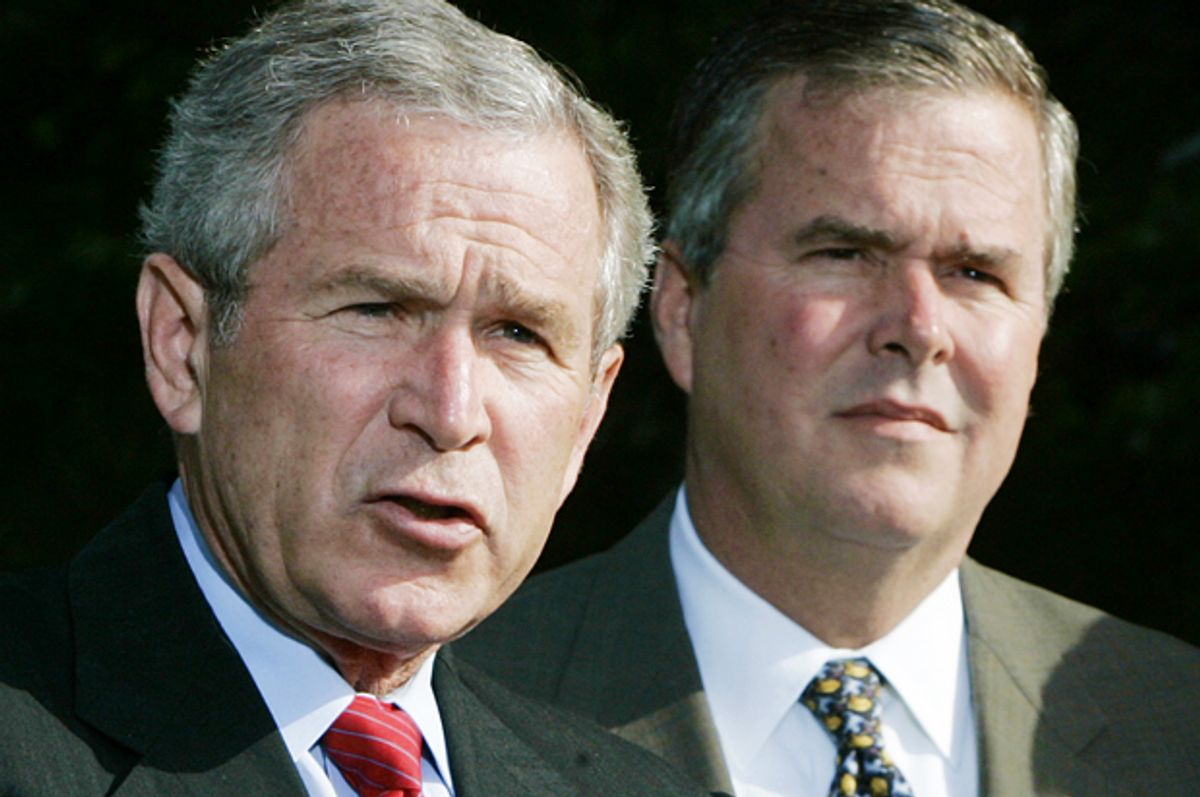 Jeb Bush would like you to know that everything is fine. After several days of self-inflicted damage trying to explain his position on Iraq, he’s telling voters that he is fine, the campaign he’s not officially running is fine, and he’s still going to win out a glorious 2016 victory even though he’s not yet a candidate. “It got a little bumpy,” Jeb said in New Hampshire, “but all is well now. The ship is stable.”

Typically, when a candidate makes a point of declaring that all is well, all is most certainly not well. And there’s plenty of reason to believe Jeb is sweating a bit. His strength as a 2016 contender hasn't been his political skill, but rather his ability to convince rich people to throw money onto his big money pile. But when the Iraq question came up – a question he should have anticipated and had a decent answer to, given his familial connection to the person who launched the unpopular conflict – Jeb was caught unprepared and then spent a week hitting himself in the face.

Establishment Republicans and neocons pleaded with Jeb to stop being so bad at politics and start defending his brother’s war. Randy Scheunemann, a neoconservative activist and lobbyist, told BuzzFeed that Jeb should immediately pivot to blaming Obama for the chaos in Iraq. “Gov. Bush could easily say to Obama, ‘The surge was working. You were handed a three-run lead at the bottom of the ninth, all you had to do was come in and close, and you blew the game.’”

That was actually the message Jeb laid out back in February in his big national security speech that everyone’s already forgotten. And he’s coming back to it now, attacking Obama for not leaving behind a large residual force of U.S. soldiers in Iraq. “The focus should be ‘Knowing what we know now, Mr. President, should you have kept 10,000 troops in Iraq?’” he said in New Hampshire yesterday. Instead, Jeb argues, Obama “abandoned” Iraq for political reasons.

This is a bogus argument that assumes that the only factor preventing the U.S. from leaving a massive troop presence behind in Iraq was Obama’s political agenda. It was actually the Iraqis who made the residual force an impossibility. George W. Bush had negotiated a timetable for withdrawal that required all U.S. troops to be out of the country by the end of 2011, and the Iraqis (after many years of military occupation) were eager to adhere to it. Obama, despite his campaign promises to withdraw American forces from Iraq, tried to negotiate with the Iraqi government to leave behind a residual force of 3,500 soldiers, but Iraq would not agree to necessary legal protections for the American troops. There were powerful factions within the Iraqi government that would not support any troop presence of any size, and “followers of radical Shia cleric Moqtada al-Sadr [were] threatening renewed violence if any American troops stayed past the end of the year.” Unable to achieve any sort of agreement, the negotiations fell apart and the U.S. troops pulled out.

The argument coming from Bush and Scheunemann and other critics who blame the rise of ISIS entirely on the failure to leave behind U.S. troops is that Obama should have forced the Iraqi government to ignore or overcome its political divisions and accept a continued American military force. And the assumption they make is that the presence of those American forces would have encouraged the corrupt and authoritarian prime minister, Nouri al-Maliki, to stop alienating and repressing rival Sunni factions, which helped create the toxic political conditions in which ISIS has thrived. The Bush administration wasn’t able to accomplish that task with over a hundred thousand troops on the ground, but Obama could have done it with 10,000 because… well, just because.

The neocons say we invaded Iraq so we could bring freedom and democracy to the region. And after setting up a democratically elected Iraqi government, they’re attacking Barack Obama for not trying hard enough to undermine that government’s sovereignty and strong-arm it into accepting American military forces.

Jeb talks about Obama “keeping 10,000 troops in Iraq” as if that’s something he could have just ordered as commander-in-chief but chose not to because it didn’t poll well. That’s nowhere close to the truth. So not only is Jeb incapable of being forthright about the Iraq War’s beginnings, he’s also can't seem to tell the truth about its conclusion.