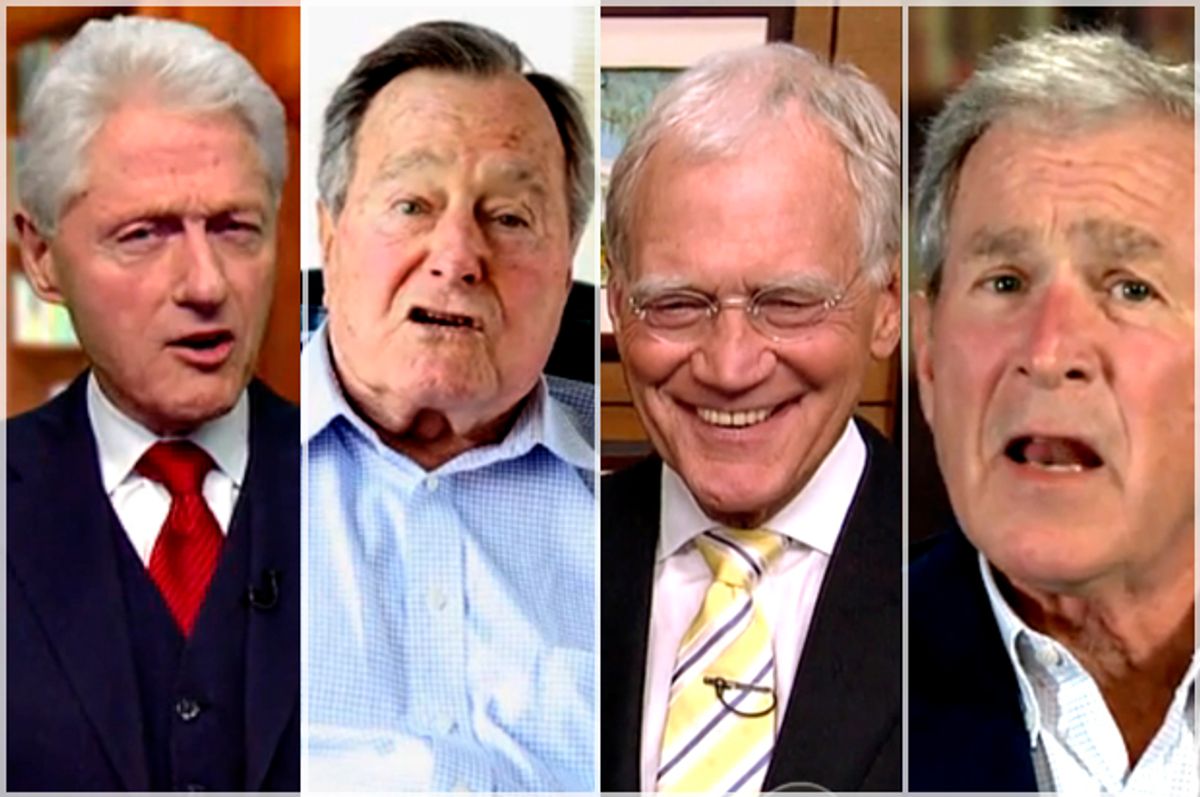 At long last David Letterman is gone, and he opened his closing show with a joke that perfectly dated him: A montage of every living president except Jimmy Carter intoning Gerald Ford’s unforgettable line, after he pardoned Richard Nixon for Watergate in 1974, “Our long national nightmare is over.”

Letterman, 68, was just getting started in comedy when Ford pardoned Nixon. I was a teenager, and it was formative for me. That closing joke made it clearer than ever that around the same time, we sublimated outrage with irony, and we’ve never recovered. Ford’s dishonest claim wasn’t true, and we all knew it. Now, 41 years later, it’s just a joke, and even people who weren’t born back then laugh at it.

But Letterman’s career straddled the time before and after we needed our outrage served with a smirk and at least a small side order of irony, the combination that’s become the hallmark of late night. Letterman’s joke actually encapsulated the transformation. “Saturday Night Live” was born in the Jerry Ford years, and it made him a laughing stock -- but for his alleged clumsiness, not the pardon that shocked the country. Which wasn’t fair: Sure, Ford stumbled a few times, but he wasn’t actually clumsy; he was a gifted athlete, a University of Michigan football letterman.  (Letterman? OK, I might be taking this too far.)

In fact, SNL was lampooning the bumbler who tried to sell his shocking pardon of Nixon with the clumsy and obvious lie: “Our long national nightmare is over.”  That was the guy who fell down the stairs of Air Force One on continuous replay. Only we didn't want our noses rubbed in political disappointment week after week. Letterman moved to L.A. to start comedy work the same year SNL launched in New York, and irony vanquished outrage from coast to coast.

Clearly, it was a break from Carson’s show; the iconic late night host wasn’t preaching civil rights night after night, he was an entertainer. But the 1960s occasionally broke through the Tonight Show host’s glib façade, and the fact that Carson lobbied to give Belafonte the opportunity shows that late night wasn’t always just a safe space just before bedtime.

And it wasn’t always safe on Letterman’s show either, to be fair. He had moments of earnestness after 9/11 and his heart surgery.  We have the 11 times he humiliated the right. Before Stephen Colbert created his “Papa Bear” character to satirize Bill O’Reilly, Letterman was doing it to his face, once angrily telling the Fox host “You’re putting words in my mouth. Just the way you put artificial facts in your head.” He sometimes seemed endearingly uncomfortable with the convention of guests hawking new products like his commercials hawked cars or shampoo.

But mostly, late night has become a safe space for the status quo. Sure, liberals enjoy Letterman and Real Time, the Daily Show, the Colbert Report and now the Nightly Show, and imbue them with huge political import. But then, when somebody as fundamentally decent and politically aware as Stephen Colbert -- who is, by the way, Letterman's successor -- has war criminal Henry Kissinger on his show, we aren't sure if he's mocking him, or mocking us, or both.

Or maybe he's just being honest about late-night being a kind of dream state before we nod off to sleep. It’s a place where we try to reckon with the horrors and humor of our day, but we don't want anything out-and-out disturbing. Maybe it works the way dreams do, taking the contents of our anxiety and serving it back to us symbolically, so we can handle it. So what was Henry Kissinger doing in my dream? And when it doesn't work that way,  we call it a “nightmare,” and it means something has gone awry.

I was already thinking about the way our culture sands the edges off anything truly disruptive, in the wake of the perplexing finale of “Mad Men.” Now show creator Matthew Weiner is telling us that the ending  – an Esalen-enlightened Don Draper creates the iconic Coke ad, “I’d Like to Teach the World To Sing” – wasn’t meant cynically, and if we can’t see that the ad was a genuinely beautiful, transformative creation, we can take our snark elsewhere.

“I think it’s the best ad ever made,” Weiner told novelist A.M. Homes Wednesday night. “That ad is so much of its time, so beautiful — I don’t think it’s as villainous as the snark of today thinks it is…Five years before that, black people and white people couldn’t even be in an ad together.”

Since I love “Mad Men,” and admire Weiner, I’m giving some thought to the fact that he may be right. Still, however beautiful the ad may be, it co-opted the disruptive movements of the ‘60s – civil rights, environmentalism, feminism  – and used the counterculture to sell Coca-Cola, a company routinely criticized for labor abuses, which faced a boycott over its refusal to leave apartheid South Africa. I’m having a hard time taking that in as a positive ending, even for Don Draper.

Back to Letterman’s opening joke. I couldn’t help wondering why Jimmy Carter, our most earnest former president, was missing. (Update: It's widely reported that he's been ill, and he was presumably not well enough to participate.) Otherwise, they were who they were; President Bush looked old and ill; Clinton underplayed it, George W. Bush seemed ill at ease, like he might flub the line. Obama was the best at it, and it’s always made me uneasy how supremely good he is at this kind of comedy.

At the dawn of the irony revolution, the fuddy-duddy Richard Nixon went on the hip variety show “Laugh-In,” but it couldn’t make him cool. Obama owns all of late night; he could host his own show when he’s finished being president. Which is not entirely a compliment.

Maybe all of this is why I came to like Jimmy Fallon better than Letterman (sorry, Dave): He doesn’t pretend to be anything he’s not, when it comes to politics. He’ll skewer Chris Christie with Bruce Springsteen, then he’ll let Chris Christie play the good sport. It’s a show. Once, the “Tonight Show” was much more than that, but for now, maybe that is enough. Until we’re ready to be angry, and not just entertained, at bedtime.