Matthew Weiner, Jeb Bush and our "cynical" little doubts: From Big Oil to classic Coke, suddenly it's "arrogant" to question what we're being sold

I'd like to buy the world a Coke, if it will keep them from asking inconvenient questions about climate change! 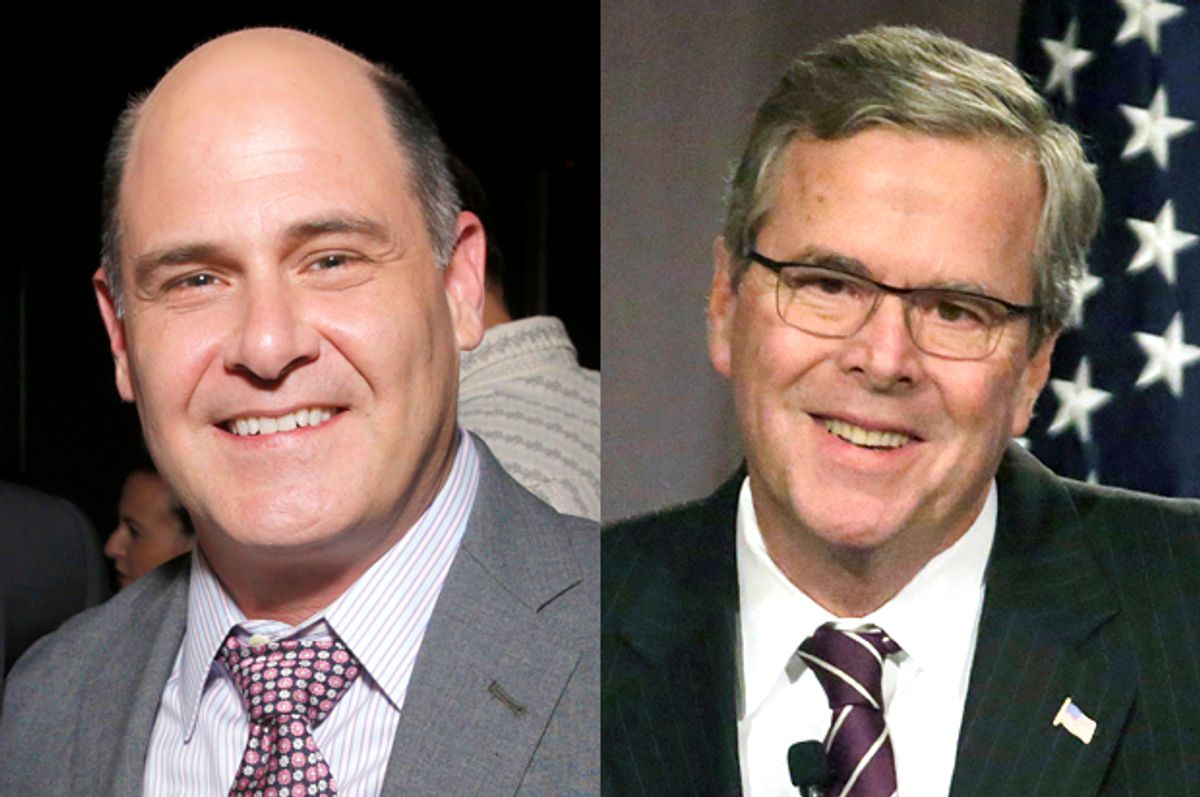 It’s not often that a Texas-reared conservative and a liberal-seeming Hollywood showrunner concur on something, but this week revealed a strange conjunction: Both Jeb Bush and Matthew Weiner don’t want you to think for yourself. Or rather, if you do – if you recognize reality, we could say – it is proof that you are mean. They want you, as Bill O’Reilly would put it, to “shut up.”

Wednesday night, Weiner was discussing his justly fawned over advertising saga “Mad Men” with novelist A.M. Homes. The subject of the show’s closing image – Don, meditating at a Big Sur retreat, breaking briefly into a quiet moment of bliss, and then dreaming, it seemed, the old “I’d like to buy the world a Coke” commercial, which we are to imagine he will craft upon getting back to New York. Here’s what Weiner said:

I did hear rumblings of people talking about the ad being corny. It’s a little bit disturbing to me, that cynicism. I’m not saying advertising’s not corny, but I’m saying that the people who find that ad corny, they’re probably experiencing a lot of life that way, and they’re missing out on something. Five years before that, black people and white people couldn’t even be in an ad together! And the idea that someone in an enlightened state might have created something that’s very pure — yeah, there’s soda in there with a good feeling, but that ad to me is the best ad ever made, and it comes from a very good place… I felt that that ad in particular was so much of its time, so beautiful, and I don’t think it’s as villainous as the snark of today thinks it is. I did think, in the abstract, ‘Why not end the show with the greatest commercial ever made?’

Well, it’s a great commercial, sure, one that much of the show's audience recognizes. And its use in the show’s finale is not a bad little joke. But for viewers to find something a little dissonant about Don heading to a Big Sur hippie retreat – an institution frequented by a subculture defined by its skepticism about consumerism – and coming out of the experience with a new way to sell a product to people who don’t need it… That’s the part that seems cynical. And since sugary drinks were in a lot of ways the all-American sequel to cigarettes, which Don also helped push -- years before his wife began to die of lung cancer – we’d kinda hoped that Weiner was making a larger point about how corrosive advertising's unintended consequences can be, especially when a corporation is trying to commodify utopia. But no, we’re sorry – just being “cynical” there. (For what it’s worth, Don is such a great salesman that he can even come up with a way to help Dow sell napalm: “When America needs it, Dow makes it -- and it works.” That’s a great commercial, too.)

This wouldn’t be so striking if on the same day, presidential candidate Jeb Bush – who we used to see as the smart, reasonable one but whose clumsy campaign is making us think again -- hadn’t given an almost identical response. On Wednesday he was in New Hampshire, where a voter asked him about climate change. Bush conceded that there was indeed such thing, but added:

It’s this intellectual arrogance that now you can’t even have a conversation about it.

Well, there’s not a whole lot Bush can do about the issue of climate change and maintain any intellectual integrity. The subject puts him in the same kind of bind as the Iraq War launched by his brother does. Jeb was raised in an oil family and his party is kept afloat by fossil-fuel money, including the Koch Brothers.

But it’s interesting that rather than saying, “Okay, I am a tool of Big Oil, I can’t talk about this in public,” he chose to call people genuinely concerned about addressing the problem “arrogant.” He comes from a family of generations of inherited wealth, one that has no hesitation invading other countries, but scientists and those who listen to them are the “really arrogant” ones. Okay, thanks.

What’s the larger meaning of this? Well, maybe it’s nothing, just a coincidence. But at least when it comes to issues close to their hearts, they want us to change the subject. If you have any concerns about the workings of commerce or what economists call externalities, you are just some kind of arrogant cynical awful person. Now please pass the soda and Lucky Strikes.