Rebel Wilson had no choice: Amy Schumer, Maggie Gyllenhaal and the truth about women and age

There's very real reasons for a woman to lie about her age, from sex discrimination to the dating world 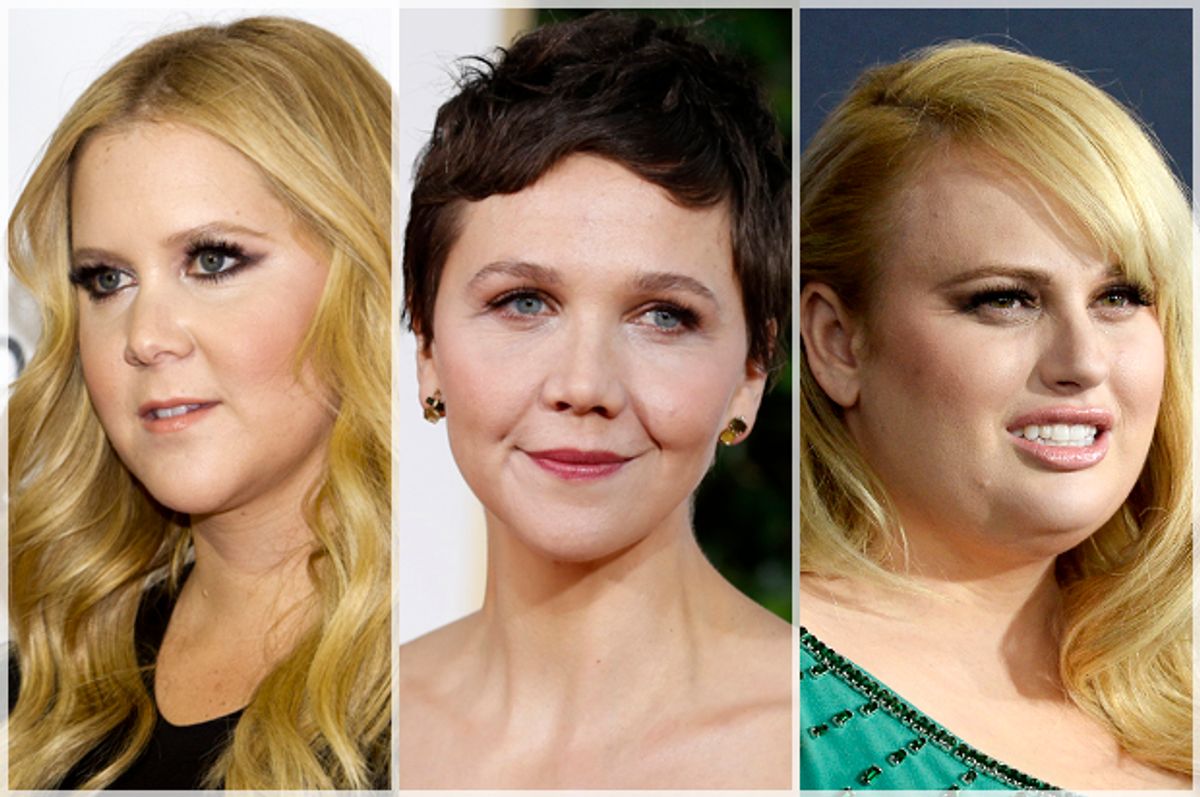 I’m not a fan of lying, but I differentiate between lies that hurt others and lies that don’t. In the case of Rebel Wilson, the "Pitch Perfect 2" star who’s been accused of claiming to be 29 when records show she’s most likely 35, I give her a pass. Why? Firstly, because plenty of actors and actresses create a mythology for themselves as they work their way up, inventing new names, backgrounds, family histories and, yes, ages. You might even say it’s part of their job, not just because they are playing characters, but because we love a rags to riches story, the juicier, more heart-tugging, the better.

Who is Wilson’s alleged slight hurting? No one. Her supposed crime is completely different from the 13-year-old who called herself 19 on her Facebook page, to the now-viral chagrin of her mother, in a video shaming her daughter. That lie could have had very dangerous consequences; Wilson’s, not so much.

The other reason to overlook this is the very real issue of age discrimination in Hollywood. As Julia Louis-Dreyfus so memorably said in the "Inside Amy Schumer" “Last F**kable Day” sketch, “In every actress's life, the media decides when you finally reach the point where you're not believably fuckable anymore.”

But it’s not just actresses who lie about their age. Women lie in other fields, as well as in the dating arena, for the presumably the very same reasons: to get ahead. A 43-year-old female artist, who for obvious reasons wanted to remain anonymous, told me she ages herself down because “I don't want anyone to look at me and think I'm old, tired, or running out of time to do my best work. There's discrimination in the art and creative worlds, where ‘young artists’ and ’30 under 30' are fetishized.”

Screenwriter Tracy Jackson pinpoints nearing 50 as the reason her successful career didn’t continue: “Hollywood has always been famous for kicking out the old, and ‘older writers’ are consid­ered those who are over forty.” If you’re well aware that youth is prioritized in your field, you’d almost be doing yourself a disservice to actively reveal your real age if it’s past the point of desirability.

In our personal lives, age is also a factor. Tinder recently came under fire for charging users 30 and over more than users 18-29. What’s to stop someone from trying to save a few bucks by shaving a few years off their age? In an interview at Match.com, "The Dating Race" author Stacy Kravetz laid out the stark reality for women dating online: “Men tend to worry that women between 35 and, say, their early 40s are bound and determined to have kids. So even if they’re 35 themselves, men tend to look for women who are younger just to take the pressure off the situation.”

Of course, the people these women are meeting on online dating sites might also be lying about their ages, but if lying will get you looked at rather than ignored, and you can pass for the age you’re claiming, why not give it a shot? There’s always time down the road to reveal your true age if you get serious with someone.

Two women who have profiles on sugar daddy dating sites, where generally older, wealthy men hire women for, as one put it, “more of a girlfriend relationship than a one-night thing,” told me they routinely change their age. Interesting, one listed herself as 24, a few years older than her real age, because “These men want young women, but not immature, too young, won't-be-presentable-at-a-dinner-party women.” Another woman, whose real age is 36, says she’s 30 on sugar daddy sites “because I look on the younger side and I think men don't go that high up on their search range.”

If you are going to lie about your age, though, in whatever form, the same thing that’s playing out for Wilson could very well happen to you. But comedy is part of her brand, which is why she’s largely been able to laugh this off, posting on Twitter, “OMG I'm actually a 100 year old mermaid formerly known as "CC Chalice" ....thanks shady Australian press for your tall poppy syndrome x.”

Good for her. I imagine she’s been prepared for this information to become public at some point. That’s part of the risk you take with any lie—that it will be exposed (cue Don Draper). I don’t fault Australian Woman’s Day for going after the story of Wilson’s age, because that’s part of their job. That this is even newsworthy is a testament to Wilson’s fame: if she was an obscure unknown, no one would be paying attention.