Ricky Gervais calls him “murdering scum”: A Texas millionaire pays big bucks to kill an endangered rhino, but what is the true cost?

It took over a year, but Corey Knowlton's controversial quest is over 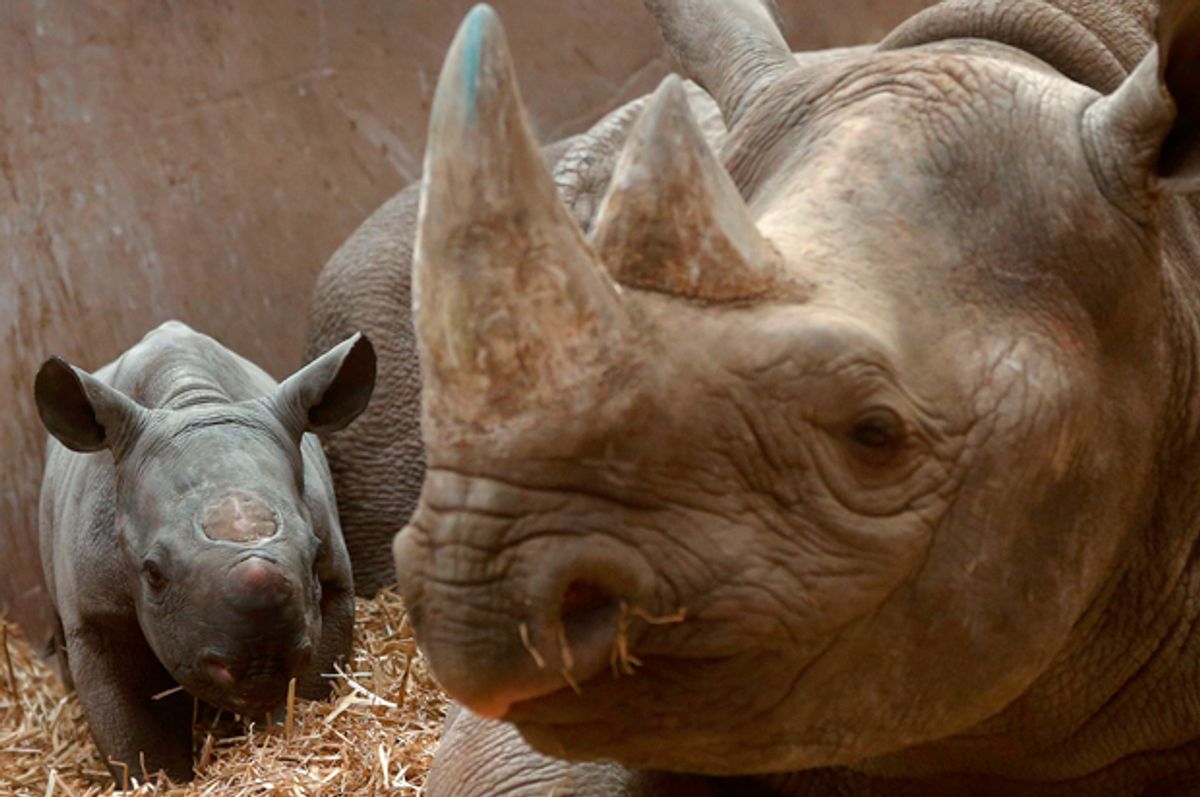 Dreams do come true -- although it helps if you've got a few hundred thousand dollars to help them along. Back in January of 2014, Texas hunter Corey Knowlton was the lucky man to give a winning bid of $350,000 in a Dallas Safari Club auction to hunt an endangered black rhino in Namibia. At the time, he explained, "I want to experience a black rhino. I want to be intimately involved with a black rhino." But that intimate experience didn't come easily.

When the news of the auction first hit the mainstream last year, it attracted criticism, concerns, online petitions and, of course, death threats in the effort to stop it. Humane Society president Wayne Pacelle said at the time, "The whole world is really fighting to protect the rhinos from the poachers and now you have some of these Dallas elite really wanting to kill a rhino just for a trophy." Knowlton, meanwhile, said he was being harassed, telling local news, "They’re wanting to kill me. They’re wanting to kill my children. They’re wanting to skin us alive … they’re wanting to burn my house down." Undeterred, though, Knowlton claimed that the rhino in question was "an aggressive older male" who was "terrorizing the rest of the herd." And he noted that the permit had been offered by — and the auction money was earmarked for — the Namibia Ministry of Environment and Tourism to go into a trust "to be used specifically for black rhino conservation." The hunt had been billed as part of an effort to "cull the herd."

A year later, though, Knowlton's desire had still been unfulfilled. In a conversation with CNN in January, he expressed surprise that his application for a permit from the U.S. Fish and Wildlife Service to import the "trophy" parts of the animal's body had not yet come through. "In my opinion, I thought it would have happened by now," he said. "Namibia wants us to come and participate in the hunt desperately. The entire point of the auction in the United States was to be able to import the carcass, the remains of the black rhino into the United States. That's why they had the auction here, in the hopes that it would bring more money to conservation than the previous permits they have sold in Namibia." And he claimed, "The animals chosen are earmarked ... at the end of their life. They are not going to help the enhancement of the black rhino species in any way. This way there is a chance that the death of that animal helps the entire species."

But finally, in March, the approval came through, with the Service saying, "Removing specific individuals from a population can result in reduced male fighting, shorter calving intervals, and reduced juvenile mortality." And then earlier this month, Knowlton had CNN tag along on the final leg of the journey, explaining, "The whole world knows about this hunt and I think it's extremely important that people know it's going down the right way, in the most scientific way that it can possibly happen." As reporter Ed Lavandera documented, it was a hunt that unfolded over the course of days, culminating in Knowlton doing what he set out to do, firing the final shots into the animal's body. Lavandera then reported that the animal's meat was distributed to a "devastatingly poor" nearby village, where "There's nothing but gratitude here."

Yet the controversy has not died with the animal. International Fund for Animal Welfare's Jeff Flocken told NPR Wednesday, "If you pay to take a human life and give to humanitarian causes, it does not make you a humanitarian. And paying money to kill one of the last iconic animals on earth does not make you a conservationist." And on Twitter, Ricky Gervais, who last month asked hunter Rebecca Francis, "What must’ve happened to you in your life to make you want to kill a beautiful animal & then lie next to it smiling?" posted a smiling image of Knowlton with one of his earlier kills and the message, "You can tell straight away he's only killing things for the good of the species right," after this reminder of his strong stance on the subject, in which he calls Knowlton "murdering scum."

The ethics of killing animals is something that affects everyone who eats meat or uses animal products, but the scale of Knowlton's experience — the price paid for it, the rarity of the animal at stake — make the issues around it exponentially thornier. What's the line between conservation effort and an experience that can be bought with six figures? A "Weekend Edition" report last year estimated that there are an estimated 4,000 to 5,000 black rhinos left in the world. And when the the hunt was over and there was one fewer, Knowlton told CNN, "Any time you take an animal's life, it's an emotional thing."