Cruz says that the media is trying to make everything about sex. The truth of the matter: That's the right's job! 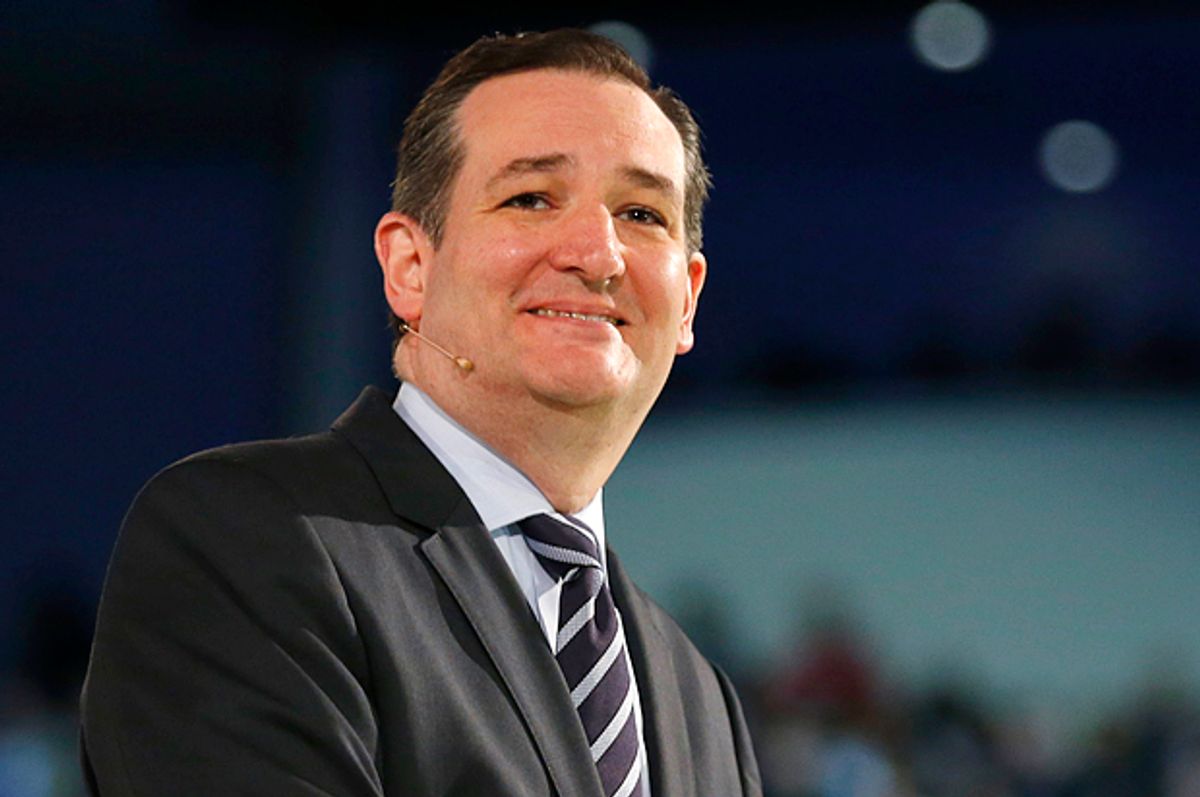 “Is there something about the left – and I am going to put the media in this category – that is obsessed with sex?”

I suppose one couldn't blame him if it were true that they were badgering him about his sex life or perhaps implying that his own sexual proclivities didn't quite match his rhetoric for some reason. But that's not what they were asking him about. They were trying to pin him down on his views about gay marriage. After all, the far right social conservative, who held his grandiose announcement in the round at Liberty University, had just recently gone on a pilgrimage to New York City to fundraise with some very high profile, gay billionaires; while there, he told his hosts that he would have no problem if one of his daughters were gay, and said only that he'd leave marriage equality up to the states. This came a something of a surprise to those who had heard him just a couple of weeks before speak in fire-and-brimstone terms about the "Jihad" being waged against "people of faith who respect the biblical teaching that marriage is the union of one man and one woman." Is it any wonder that the press is questioning him about his views on this?

So, to characterize it as an obsession with "sex" would be a bit of a reach, unless one thinks that Cruz's own obsession with lurid descriptions of sadistic violence has some kind of sexual component:

“ISIS is executing homosexuals – you want to talk about gay rights? This week was a very bad week for gay rights because the expansion of ISIS, the expansion of radical, theocratic, Islamic zealots that crucify Christians, that behead children and that murder homosexuals – that ought to be concerning you far more than asking six questions all on the same topic.”

This has become a common refrain among certain hawkish right-wingers who try to paint their own attitudes as a trifle by comparison to the "real bad guys." And it is actually similar to the argument one often hears from certain men on both the left and the right when they become exasperated by feminist identity politics. They'll often retort that western women have it easy compared to others and they should probably shut up and thank their lucky stars they aren't being stoned to death for adultery or forced to work for a dollar a day in Bangladeshi garment factories. "You've got it easy! We could be beheading you! Think about that for a minute."

Unfortunately, there's no need to wonder too much if you're genuinely curious. There are a spate of new reality shows on TV that are mining this subject of conservative marriage, the most recent being a two-hour TLC special called "The Submissive's Wife's Guide To Marriage." (And no it's not a "50 Shades of Gray" marriage manual, although from the looks of it, that kind of submission would certainly not be considered out of line either.)

The show focused on several couples, but primarily on Tara and Tim Furman from North Carolina, who have been married for 20 years but found themselves ten years into it unhappy and drifting apart. Inspired by their Bible study they entered into what they call a submissive marriage, which basically means that the wife subordinates all of her desires and needs to the desires and needs of the patriarch. Tara put it this way: A wife's "job description is to help her man, serve her man, submit to her man and sleep with her man" and that means any time and any way he wants it.

She counsels a younger woman named Kristin who is trying this concept by telling her that her own marriage is hot, hot, hot. She tells the audience:

Yes, she used those very words. And then she spells it out for the younger woman directly saying:

"Grab his butt! Be in the kitchen and grab his butt. You know what I mean by that. Girl you've got to be showing the goods and you got to be dressing like the hoochie momma. When you're around your man talk dirty to him. Bring it girl."

The men are obviously quite happy with the arrangement, although Tara's husband does sigh heavily and complain that when a wife submits you have to "give her something to submit to," but it's not readily apparent what that means. (It sounds menacingly like that old fashioned parental threat, "stop crying or I'll give you something to cry about.")

When I was watching this show I couldn't help but wonder what Rick Santorum would think of all this. Surely he'd be in favor of the submissive part of the equation. He hews pretty closely to traditional family values. But during the last campaign, he said some very interesting things about marriage and sex that leads one to think that maybe this semi-pornographic "hootchie-mama" stuff might not comport with his ideas of proper behavior in the marriage bed. He famously declared:

"A President Rick Santorum will start an ongoing national discussion about family, marriage and fatherhood. One of the things I will talk about that no president has talked about before is what I think is the danger of contraception. The whole sexual libertine idea that many in the Christian faith have said, well, it's ok, contraception's ok. But it's not ok.

If you can take one part out, if it's not for the purpose of procreation, that's not one of the reasons you diminish this very special bond between men and women. So why can't you take other parts of it out? It becomes deconstructed to the point where it's simply pleasure..."

That socially conservative submissive wife seems to have taken a different message from her Bible studies than Santorum did.

So who's actually doing all this babbling about sex all the time, particularly in a political context? It wasn't liberals who wrote a turgid bodice ripper and sent it to the U.S. Congress under the name "The Starr Report" and then put it on the internet. And it isn't liberals who are going on TV to talk about their sex lives and encouraging wives to "grab their husbands' butts" in the name of the Lord. There are no liberal presidential candidates spewing their ideas about the appropriateness of having sex for pleasure. And it certainly isn't all those gay newlyweds tearily sharing chaste pecks on the lips on the courthouse steps on their wedding day.

No it isn't the left that's obsessed with sex. It's the right. They might wish they could quit talking about it, but they can't.