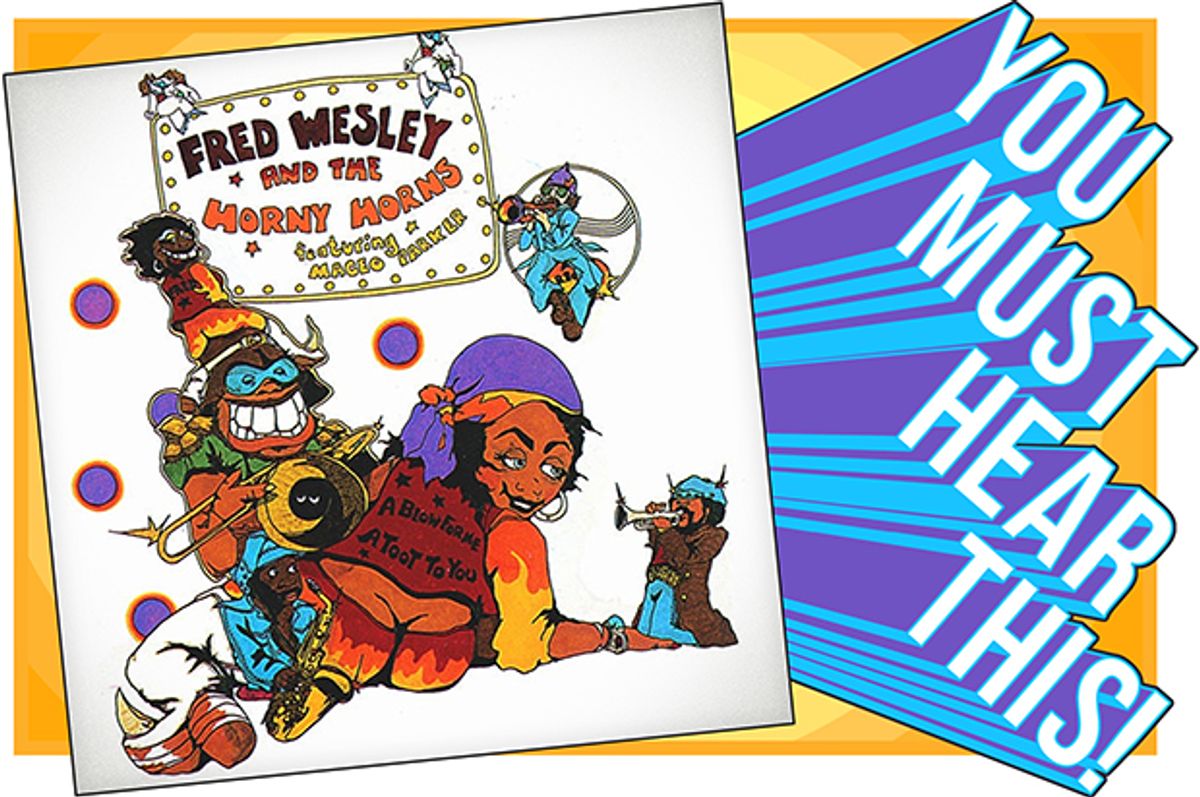 Fred Wesley's resume is more impressive than yours. His previous employers include the Ike and Tina Turner Revue, James Brown, Parliament-Funkadelic, Count Basie and Hank Ballard. His contributions as a composer and arranger were foundational in the development of funk and R&B in the seventies. I don't know what funk would have sounded like without him, and I don't want to know.

And then there's his trombone. His solos are tight and surgical, but somehow also loose and extemporaneous. And like the best soloists, he makes you think about the instrument he's playing in a new way. His trombone solo in "If You Don't Get It The First Time, Back Up And Try It Again, Party" is one of my favorite anything solos, ever. "Do it, Fred!"

In 1977, Fred Wesley released "A Blow For Me, A Toot To You" on Atlantic Records. It was produced by Bootsy Collins and George Clinton, and it sounded like this:

I contacted Fred Wesley to discuss the album. The following has been lightly edited for length and clarity.

I would love to be a fly on the wall during this recording session. It sounds like you're having a blast, but I assume it must have been very hard work?

It was a lot of recording sessions, not just one. We just took the best music from a few recording sessions that we had and combined them to make the album. So, all our sessions were a lot of fun, especially the ones for "Four Play" and "Between Two Sheets." We had some guests – the Brecker Brothers [were] on there, and some other people – Marcus Belgrave... and so we had extra fun with those people that were outsiders but they were coming inside, and we all had a great time, you know? But it was a combination of some tracks from a lot of different sessions.

Do you remember how long it took to get the song "A Blow For Me, A Toot To You" down?

It took some time. We averaged nine hours per session – the horn parts. Nine hours was not necessary, but... the fun we were having, and the double-tracking and triple-tracking we were doing, it took nine hours.

What was it like, working with George Clinton and Bootsy Collins in the studio?

Oh, it was fun, you know – always fun with George and Bootsy. They always have a lot of party slogans, and recording slogans and everything – you know, like: "no blow, no blow" and stuff like that... [laughs] But we'd always have a good time with them.

Yes it does. George used to always have some blow for the horn section when we were recording, and one day he didn't have it, and so we just sat there with our cases. [laughs] Horns in the cases. And then, he said "Come on, come on, man! We're getting ready to record!"
"No blow, no blow."

It sounded like you had a few more of Bootsy and George's "party slogans" on the tip of your tongue. Can you think of any more examples?

Well, anything you say to Bootsy or George, it turns out to be a party slogan, you know? Like, I'd say "doing it to death," and James Brown turned that into a song! That was the title of the song, although it never got on the record. You can't say nothing around them – they'll turn it into a party song... I have made that mistake many times.

How different was this session from your earlier recording sessions with James Brown?

Oh, totally different. James Brown would come in and we'd do a session – no laughing, no joking around – you know, we'd just take care of business. We took care of business with the "Blow for Me, Toot to You" session, but not like James Brown. With James Brown, it was strictly business the whole time.

If you have any other recollections or anecdotes you'd like to share, I'd love to hear them.

Well, "Between Two Sheets" was a revelation. I was away for some time, and when I came back, they had "Between Two Sheets" and I was amazed and I thought about why they did that song, and I don't know why they did it, but it was a tune I didn't particularly want to be on the album. But, it was on there, it was a success, so everything is all right!

Why didn't you want "Between Two Sheets" on the album?

It was too silly! [laughs] It was silly. And at that time, I could be silly, but I couldn't be completely silly, and it was a completely silly song. So, I really didn't want it on there, but you know, everyone else agreed that it was silly... You know, the same person that said "a blow for me, a toot to you" didn't want to call the album "Blow Job" which was my idea! I wanted to call it "Blow Job" and they said "that's too risqué!" But they put "Between Two Sheets" on there, and "Four Play" and all that other silly stuff, so I don't know why they couldn't call it "Blow Job," you know?

This album is pretty dirty! Did it get a lot of radio play?

"Between Two Sheets" got quite a bit of play, but most of the play came from "Four Play." And believe it or not, "Peace Fugue" got a lot of action. But those are the only ones I can remember that got actual radio play.

I was surprised to discover that you are not in the Rock & Roll Hall of Fame. How much sleep do you lose over that?

A lot. But I just figure they don't like me for some reason and... I don't know. They don't recognize my contribution, is the reason why. And I'm not as important as some people are. But I think maybe one day they will. If not, they can kiss my... you know. [laughs]


Fred Wesley currently resides in Manning, South Carolina and continues to tour with his group Fred Wesley and the New JB's.