We must stop trusting Big Oil: How many environmental nightmares does it take?

Decades after a major spill opened our eyes to oil's dangers, we're still living under the delusion that it's safe 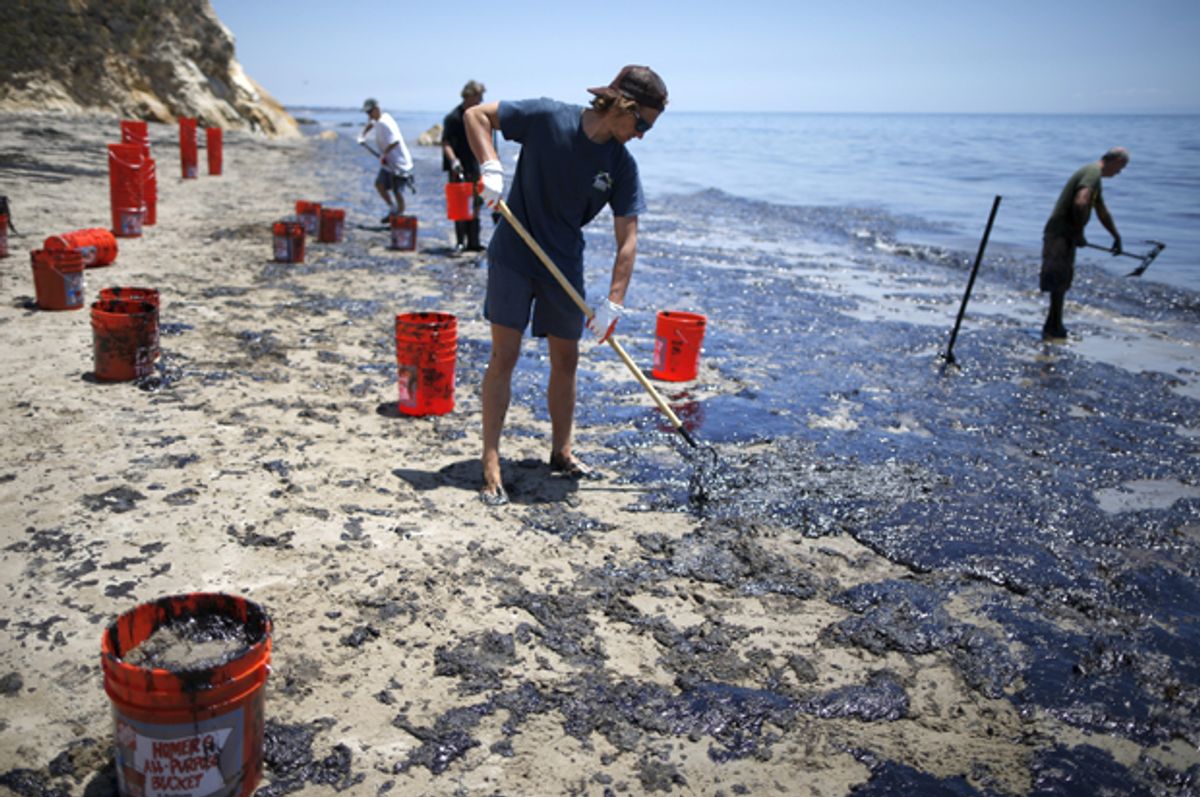 The oil industry's latest disaster has arrived on the shores of Santa Barbara, California, where an underground pipeline ruptured and spilled an estimated 21,000 gallons of crude oil into the Pacific Ocean. We don't know the full extent of the damage yet -- in the worst-case scenario, we could be looking at something more like 105,000 gallons spilled -- but officials say the oil, which has separated into two large patches, has coated at least nine miles of coastline; Wednesday evening, California Gov. Jerry Brown declared a state of emergency for the county.

If it's any consolation, Greg L. Armstrong, the chairman and chief executive of Plains All American, which operates the pipeline, apologized for the "inconvenience" the spill caused.

Whatever you want to call it -- the line between inconvenience and tragedy depends on just how much the person talking values the protected beach that's been temporarily closed by the oil slick -- the spill hit a stretch of shoreline that's been burned by Big Oil before. And it's proven as useful a tool as any for jiggling our collective memory, as people have started talking again about that other Santa Barbara catastrophe: an offshore well blowout that took 11 days to cap, by which time as many as 4.2 million gallons of crude oil had escaped, coating some 30 miles of beach and hundreds of miles of ocean. At the time, January 1969, it was the largest spill ever to occur in U.S. waters. The president of the company responsible for it, Union Oil, didn't want to call it a disaster, either: "I am amazed," he said at the time, "at the publicity for the loss of a few birds."

He probably never got over the shock. In the nearly 50 years since, the spill's impact has been measured not just in seabirds and marine mammals killed and miles of coastline sullied, but in the consciousness it's widely credited as awakening in Americans as to the considerable downsides of fossil fuel extraction. "People could see very vividly that their communities could bear the brunt of industrial accidents," Arent Schuyler, then a lecturer emeritus in environmental studies at University of California, Santa Barbara, told the L.A. Times in a piece looking back on the spill 20 years after the fact. "They began forming environmental groups to protect their communities and started fighting for legislation to protect the environment."

Real, significant victories followed: the Marine Protection, Research and Sanctuaries Act, the Clean Water Act and the creation of the Environmental Protection Agency, just to name a few -- the spill was the most visual mark, in many ways, of the beginning of the modern environmental movement. The first Earth Day took place the very next year. If it's possible to say anything good can come out of an oil spill, well, some pretty good things came out of this oil spill.

In the L.A. Times, Michael Paparian, then the state director of the Sierra Club, put it perhaps a bit cynically. "We'd point out the risks of certain projects," he said of the group's lobbying efforts in the spill's aftermath, "and we'd have a real catastrophe to back up our claims."

It wasn't, unfortunately, the last: Santa Barbara's place in history was easily eclipsed by the Exxon Valdez collision in 1989 -- more than 11 million gallons of oil into Alaska's Prince William Sound -- and by the Deepwater Horizon explosion in 2010. Santa Barbara may have taught us to be wary of oil's environmental impacts, and yet despite those and countless other, smaller disasters, we're still operating under the delusion that it can somehow be made safe.

The underground pipeline that ruptured in Santa Barbara Tuesday was supposed to be safe -- or at least safer than our volatile, underregulated oil trains. All American, under the terms of a settlement it reached with the federal government for 10 previous spill it's responsible for, was supposed to be taking steps to minimize the risk of future incidents, and to implement leak detection technology for when those efforts fell short. Neither, it appears, was enough to stop the leak or even to alert the company to the problem once it occurred. We have, as Anthony Swift, an attorney for the Natural Resources Defense Council, argues, every reason to be skeptical of the industry's plans to increase the amount of crude shipped and piped down the West Coast, from 50,000 barrels per day to more than 650,000 -- to say nothing of Shell's assurances that it can drill safely in the Arctic.

The only way we can actually believe the industry and regulators mean it when they say they're going to get their shit together is if we forgive them every time they've broken that promise in the past. But we know better than that. We also know, to an extent that we couldn't have in 1969, that there is no such thing as safe oil. Because the best possible scenario, in which fossil fuels are extracted from the ground and transported to a refinery without incident, results in us burning them, and adding even more greenhouse gases to our atmosphere. That unspilled oil is just as ruinous for the ultimate impact it will have not just on a stretch of beach, but on the entire planet. If the damage a slick of oil could cause a previously pristine beach can be considered our wake-up call to oil's dark side, climate change should be the nail in its coffin.

In Santa Barbara, meanwhile, Armstrong has vowed to right his company's most recent wrong. “We will remain here until everything has been returned to normal,” he assured the community, which, presumably, can then rest easy until the next catastrophe strikes. If by "normal," he means a paradigm in which we continue to pretend that fossil fuel extraction is worth the risks, well, we should take a lesson from the past and refuse to settle for that.