Elizabeth Warren is winning: How the progressive icon is remaking politics -- without running for president 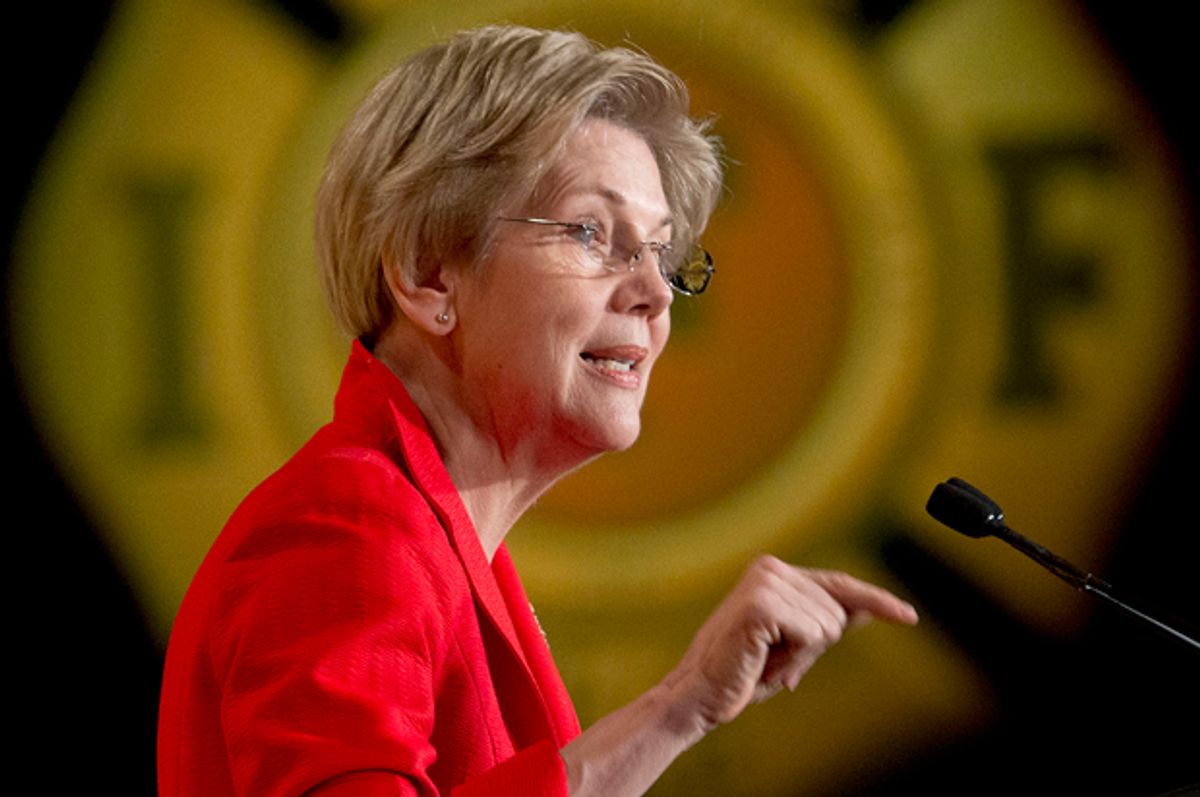 With most of the political press having finally accepted that Sen. Elizabeth Warren is indeed not running for president, it’s only fitting that the Economist, a neoliberal and generally clueless British magazine that American elites like to pretend they’ve read, has an essay in its new issue all about how she’s too liberal and could never win.

But more than the essay itself — which is by turns hackneyed (She’s a left-wing Ted Cruz!), objectively wrong (the Trans-Pacific Partnership is not primarily about trade), and misleading (President Obama’s “absolutely wrong” comment wasn’t about the entire TPP) — the Economist’s belated attack is interesting for what it suggests about Warren’s broader goal of leveraging her fame, credibility and fundraising prowess to move the Democratic Party to the left. Which is, simply put, that it seems to be working.

I’ve written about this previously (as have others) but for the uninitiated, here’s the basic gist of the theory: Because Warren is by most accounts more interested in her cause — expanding the middle class with strict regulation of Wall Street and investment in the welfare state — than in holding office, she’s willing to ignore the siren song of the presidency and focus instead on becoming a power broker in both the Democratic Party and the Congress. By assuming the role of de facto party leader, Warren will have the potential to influence Democratic policy for decades. If she were to somehow become the president, she’d only have eight years, tops. And as the Obama example has shown, in an era of gridlock and polarization, even the president can only do so much (especially in the realm of domestic policy).

The idea, then, is for Warren to use someone like Ted Kennedy or Newt Gingrich as her model rather than someone like Obama or either of the Clintons. Once Kennedy’s attempt to wrest the party’s 1980 nomination away from Jimmy Carter had come to naught and he had finally and definitively given up on becoming president, he spent most of the remainder of his career in the Senate doing what he did best: He legislated. And for decades, hardly a single important Democratic bill made its way through the Congress without his fingerprints. He was the “liberal lion” of the Senate; and despite operating in a conservative era, he was able to keep some major legislation closer to the left than it otherwise would have been.

Gingrich, meanwhile, switched the order — first he ran the House of Representatives, then he ran for president — but arguably left even more of a mark. As soon as he arrived in Washington in the late ’70s, Gingrich, by his own admission, had two overriding goals: To become speaker of the House, and to build a lasting Republican majority. And in 1995, after spending more than 15 years not only climbing up the GOP ladder but attacking moderate and liberal Republicans (his erstwhile allies) in order to move the party to the right, he accomplished both. Because he has become just another windbag pundit and money-grubbing huckster, it can be hard to remember this — but as Harvard Law’s Lawrence Lessig and others have noted, Gingrich’s legacy, for good or ill, can stand with that of any other politician of his generation.

Obviously, it is way too early to measure Warren’s accomplishments against those of these two men. She’s only been in the Senate for a bit more than two years (although the Consumer Financial Protection Bureau, her biggest victory before she won elective office, is nothing to sneeze at, to say the least). But if you look at how Warren’s operated since becoming a senator — and especially how she’s handled herself during the early stages of former Secretary of State Hillary Clinton’s 2016 campaign, as well as President Obama’s ongoing push to pass the TPP — you can see her following a similar route. She hasn’t sacrificed the intellectual and moral authority she holds among Democrats on the altar of presidential ambition; and she’s used that power (as well as her prodigious fundraising) to pull other Democrats toward her vision.

The way she’s thus far handled her relationship with Hillary Clinton, for example, has been masterful. By refusing to offer a so-called Shermanesque disavowal of interest in the presidency throughout 2014 and 2015, she left the door open just barely enough to keep the press interested — and the Clinton camp nervous. As a result, she’s not only established a facile but politically useful media narrative in which every Clinton move to the left is depicted as a nod to Warren, she’s also set up a dynamic where, because Clinton is perceived to need Warren more than Warren needs her, she can make some concrete policy demands in exchange for an endorsement. Case in point: Warren’s not-so-subtle request this week that Clinton “weigh in” on the TPP.

Significant as that kind of influence may be, though, it’s also rather short-lived. For one thing, presidential campaigns are only quadrennial occurrences, so this is hardly an approach Warren can stick to year after year. For another, if Clinton manages to win the White House and then decides to run for reelection in 2020, she won’t need Warren’s imprimatur nearly to the degree that she does today. She’ll have a record of her own to be judged by, one that Democrats will compare against the populist, Warren-like rhetoric she’s currently using on the campaign trail. There won’t be much left about which to speculate.

And this is why Warren’s ongoing squabble with President Obama over the TPP is so encouraging. Like a hypothetical President Clinton in 2020, President Obama doesn’t really need Warren’s approval — or at least he wouldn’t if more rank-and-file liberals trusted him on the free-trade issue. Yet because they don’t (and because the media is, again, powerless in the face of a personality- and conflict-driven narrative like Obama vs. Warren), the president has found himself in a position he clearly loathes: matching his progressive bona fides against hers. Of course, if Warren were wrong on the merits, this would only take her so far. But because she isn’t, she’s been increasingly able to turn support for TPP’s most odious provisions — like the investor state dispute settlement — into a kind of liberal litmus test.

So, yes, the Economist, you’re quite likely correct that Warren would not make for an ideal presidential candidate. She’s too associated with the liberal wing of her party for a national media that still holds as an article of faith that only centrists can win; and her views on foreign policy are, to put it lightly, ill-defined. But if the price she pays for never occupying the White House is pushing the Democratic Party in a direction where an agreement like the TPP is seen as a non-starter — or where the mainstream, front-running candidate can no longer avoid supporting a financial transaction tax — I think that’s a trade Warren, and liberals more generally, will be happy to make.