Westeros is the Garden State: Everything I love about "Game of Thrones" I learned from New Jersey

The Lannisters and Sopranos have a lot in common — my feminist friends bailed, but "GoT" speaks to my gritty roots 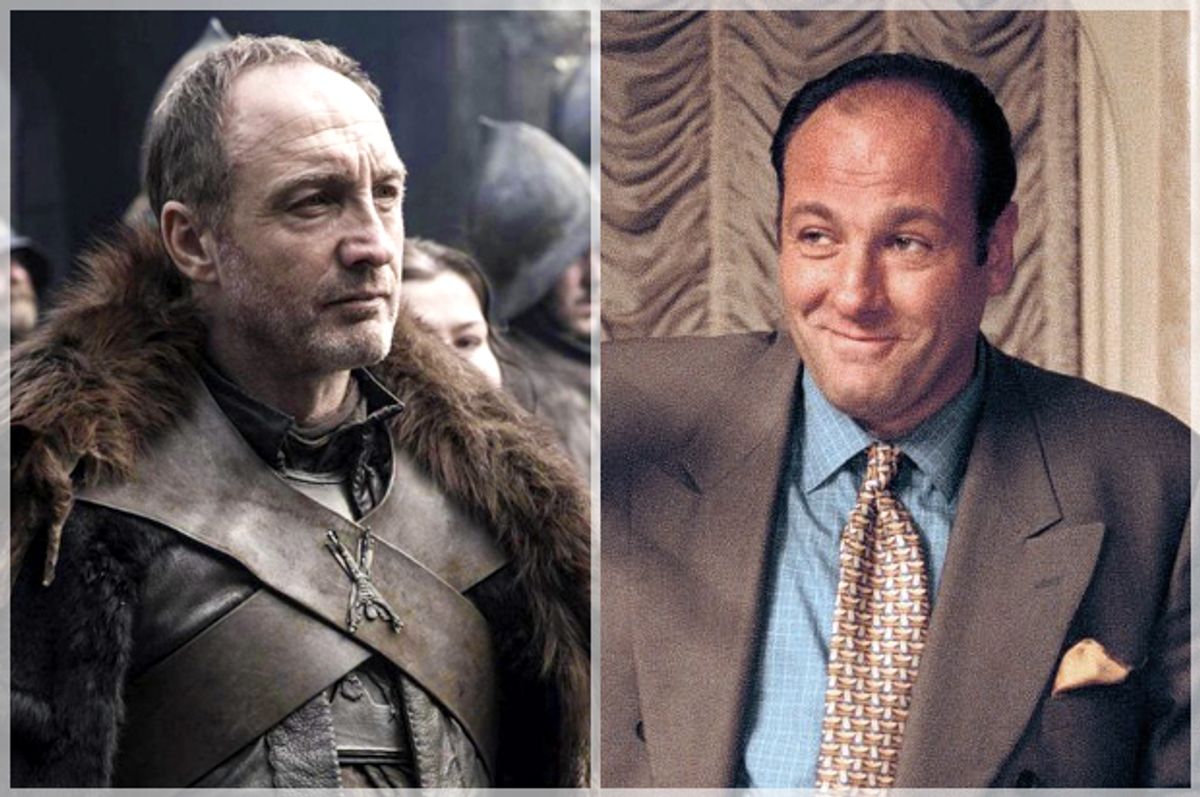 Michael McElhatton in "Game of Thrones," James Gandolfini in "The Sopranos" (HBO)
--

My otherwise entirely inexplicable love for "Game of Thrones" came into focus the day I found out George R.R. Martin is from Bayonne. Because like a Bon Jovi song or going down the Shore, God help me, "GoT" speaks to the Jersey in my soul.

I am not what you would call the typical audience for a show like "Game of Thrones." I never read the books, never had the slightest curiosity about them. I tend to run screaming from anything that might involve characters dressed like they're going to a Ren Faire. The only thing I've ever liked that had a dragon involved was "Harry Potter." I walked out halfway through the first "Lord of the Rings" and never looked back. So when "Game of Thrones" debuted four years ago, I gave it all the inattention I felt it deserved. I'm also a professional offended feminist, so as soon as my friends started pointing out the show's, er, complicated relationship with women — about a half hour into the pilot episode, when the pawned-off into marriage Daenerys first showed up — I was sold on never watching it. I recall a friend pondering why in this mystical world without Internet access the women still all had bikini waxes, and figuring that was all I needed to know.

Then several months later, curiosity got the better of me. This was by now shortly after "American Horror Story" had debuted, conveniently timed to a particularly dark, heavily blood-soaked moment in my health life, when I had developed a new appetite for entertainment with grim edge. And while my friends were rallying around the female empowerment sagas in "Mad Men," I instead found myself drawn into the show with absurdly fancy accents and weekly dismemberment, a show that's been called out for having a race problem, a gay problem and, most of all, a hotly debated woman problem.

Initially, I chalked up my fascination as a simple side effect of personal medical drama, a cathartic release. Then I learned that the man who created the Seven Kingdoms grew up across the narrow turnpike in a housing project in the next town over from my homeland of Jersey City, and had gone to a neighboring Catholic school. It all started to make a lot more sense after that. "I went to school on Fifth Street, and that was pretty much my world, from First Street to Fifth Street, except in my imagination," Martin told New Jersey Monthly two years ago. "There were always big ships on the way to Port Newark, freighters and oil tankers with flags from all over the world … I tried to imagine what it would be like to be voyaging on some of these ships…. Staten Island was Shangri-la to me. It was just lights shining on the water, lights of people that I would never see, people that I would never touch, but it really kindled my imagination."

Staten Island can look a lot like King's Landing when you're living near Newark.

Though I am not of the same generation as Martin, I know the world we shared — grimy, rough and often just plain freakish Hudson County, long before gentrification made Hoboken the new Brooklyn. Organized crime? Business as usual. Political corruption? LEGENDARY. Murder, robbery, rape? For a while there, the Garden State was really crushing it on the violent crime fronts. Throw in a few terrifying Catholic school nuns and you start to see how the Lannisters, with their ruthlessly developed approach to business, family and family business, aren't so different from the Sopranos.

We're now on the fifth season of "GoT," and many, many rapes and murders and dismemberments and immolations later, and I'm in a different place in my personal life as well. I can completely understand the frustration of fans for whom Sansa's recent rape was a coup de grace, why both The Mary Sue and Claire McCaskill have thrown in the towel on the show. I similarly gave up on "American Horror Story" after "Coven," when watching it began to feel like a test of how much I could stomach. For me, though, "GoT" feels consistently brutal to all its characters, and its power to shock is in the way that very bad things happen even to those in whom we've become deeply invested. And I would still take those feelings of horror because I care about these people and their world over my revulsion toward the relentless rape-of-the-week story lines that have always made the "CSI" and "Law & Order" franchises so much more offensive and off-putting to me.

I now live far, far away from where I began — I scaled the wall and journeyed the grueling distance of a Lincoln Tunnel drive into Manhattan long ago. I'm proud of where I come from, but I understand intimately that longing Martin once had, that feeling of looking out the window and seeing a whole world of adventure and possibility, somehow simultaneously within touching distance and a daunting world away. For a Jersey girl like me, that Iron Throne can be defined as just getting out of the 201. The climb is all there is. And baby, we were born to run.