I was startled by the realities of the procedure, but profoundly moved by the women who needed it 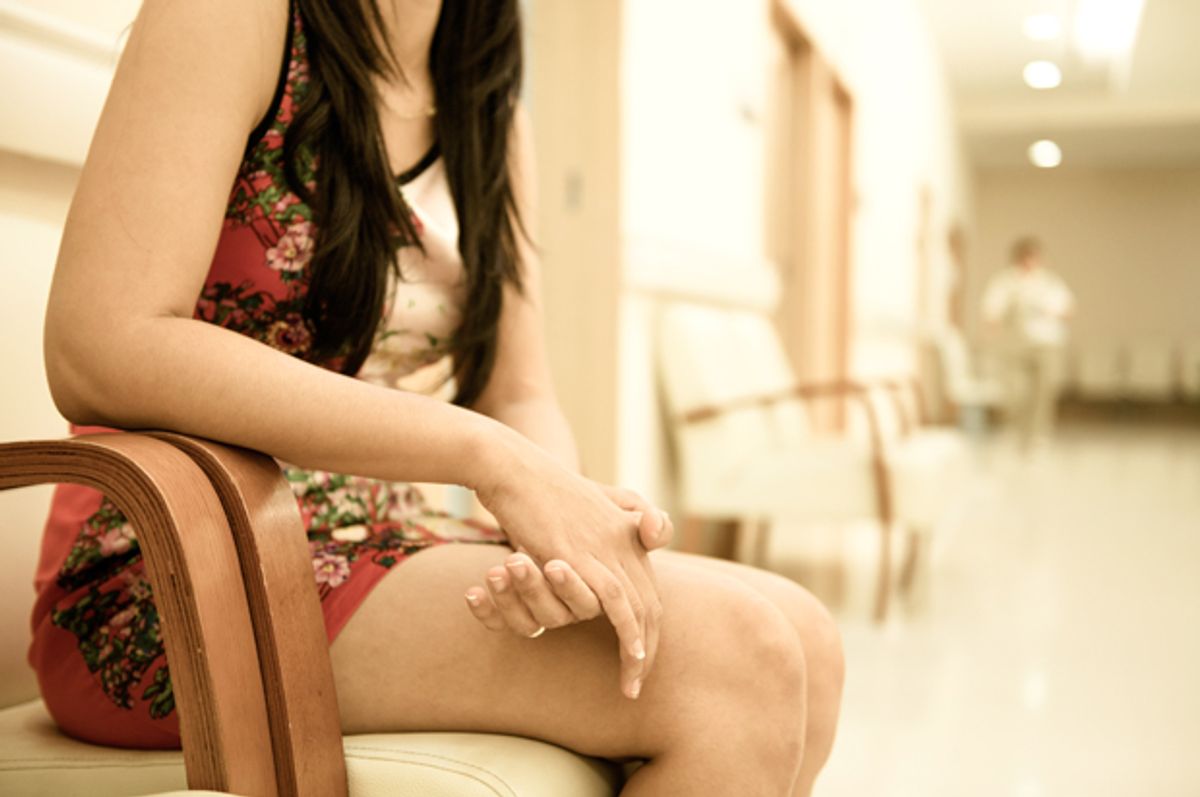 The first woman I ever saw have an abortion was a young, petite blonde. She was already on the table when I came in the room. She wore only a thin blue blouse and socks. A medical paper cover draped over her from the waist down. The doctor told her to put her feet in the stirrups and scoot her bottom down, much like every GYN visit every woman has ever had. The assistant, my trainer, stood near the doctor and chatted with him about weekend plans.

The girl was quiet and kept her wide eyes fixed on the ceiling. I stood above and to the right of her head, feeling like I had no right to be there. Before long the girl began crying out in pain as he did his work between her legs. The assistant explained to her that the doctor was manually dilating her cervix. She was moving around a bit as if her body was rejecting the pain and discomfort and the doctor and assistant told her in serious tones that she needed to be still. Once she was dilated enough, the doctor began the vacuum aspiration, which pulls the embryo from the uterus. The sucking noises during the aspiration sounded much like when they suck your spit at the dentist. Then, just like that, it was done and the noise stopped. The girl lay still, sobbing softly.

I followed my trainer to the lab where products of conception (P.O.C.) were inspected to make sure the doctor removed all the bits that, if left behind, could cause an infection. My trainer made a point to show me the tiny arms and legs floating in the glass baking pan. At 10 weeks and beyond, those appendages are formed and clearly recognizable.

It was all so heavy. The loneliness of those little arms and legs. That girl, so clearly suffering during the procedure. Before my job at the clinic, my stance on abortion had been so black and white. I had been firmly pro-choice for as long as I could remember. Was it possible that working here could change my mind?

When I started my job at an abortion clinic, I had recently graduated college with a creative writing degree, but finding a job was hard, and finding health insurance and benefits was even harder. When a friend asked me to work with her at a well-known women’s clinic as an assistant, I thought, sure. It was a grown-up job, and she assured me I didn’t need medical experience because they would train me. I’d worked in hospitality as a waitress, and she said my people skills would be one of the most important things I’d bring to the job. Besides, I agreed with the mission of the organization. I was a feminist.

Tuesdays were abortion day at the clinic, or A.B day, as we called it. But the rest of the time it was mostly basic GYN care, STI testing (we termed it “sexually transmitted infection,” not disease) and providing birth control. I was to be the front desk girl, but would be trained to assist the medical staff in various ways when needed.

On A.B day, I assisted the doctor. In truth he needed very little other than for his sterilized tools to be ready and for me to quickly grab the jar of P.O.C as soon as the procedure was done, remove the tubing, cover it so the contents are not visible and usher it out of the room to the lab.

But my real job, the one I grew to feel proud of, was to support the women. Some had boyfriends, husbands, friends, sisters or mothers with them. Some patients were alone. I felt especially compelled to help them.

The doctor would inject Versed, a common sedative to help people relax during surgical procedures, into a vein in their arm. Then, as he took his place and unwrapped his tools, I would focus solely on the patient.

“I’m going to be right here the whole time,” I would tell them. “I’ll let you know what the doctor is doing. If you want to hold my hand you can.”

She would nod, not eager to be so chummy.

“Where do you work?” I’d say, and we’d go from there, until time for chit-chat was obviously over. Then I would shift the conversation. “The doctor is going to manually dilate you now, which we explained in counseling. You’ll feel some cramping.”

When it was really starting to happen, she would usually take my hand. As the procedure continued, she would squeeze tighter and tighter until sweat formed under my polyurethane glove.

Then came the low hum of the aspiration machine and the sucking noises. Sometimes she would moan in pain or emotional release, or she would just squeeze her eyes shut and turn her head to the side, tears running over the bridge of her nose and toward her ear.

Then the sucking noises stopped and the hum of the machine stopped with a flick of a switch and I’d have to let go of her hand and tell her, “It’s done,” and I’d hurry to get the P.O.C. out of the room so I could get back to her. I’d help her dress and put my arm around her to steady her as we left the procedure room to go to the recovery room.

It was intense, to say the least, but I felt like I was helping people get through one of the most scary and awful experiences of their lives. Holding a woman’s hand through her abortion became oddly rewarding.  They often thanked me and the other staff at our little clinic, who were really quite amazing, including our gentle and warm doctor.

After about a year of assisting procedures, I trained to counsel. I gave patients an overview of what to expect during and after the procedure, and answered their questions. Of course, we had questions too. It was important to establish that the patient was choosing this termination of their own volition, and that they were positive they wanted to take this step.

It was as a counselor that I really started to understand the bonds between all women. I saw so many different types of women, from teens to mothers of teens soon to leave the nest not wanting to start over with a new baby. Some women were in good relationships, some were not. Some weren’t involved with the father anymore at all. Some wore sweat pants, some seemed overdressed in cute outfits and strappy pumps. Some were in college, some were professionals, some could barely scrape up the money for the procedure. Some already had small children and couldn’t afford or cope with more. Some were using birth control, some were simply careless.

All of them had their reasons for not wanting to carry their pregnancy to term.

And there were some who never thought it would happen to them, like the one who sat across from me, her long blond hair pushed back with a hairband. Her eyes were curt as she tried to look everywhere but at me.

“I don’t even believe in abortion,” she finally told me. “I’m Catholic.”

“My family would freak out if they knew I was pregnant. My boyfriend and I aren’t married.” She folded her arms. “Honestly, I don’t know how you can do this job.”

“I do it because I believe that women should have a clean and safe place to go if they have an unplanned pregnancy and it’s not a good time for them to have a baby,” I said.

She didn’t really have a response. And she went through with the abortion. I always wondered if she was grateful to at least have a hygienic place with a respectful and non-judgmental staff to turn to in her predicament, or if she struggles to this day with the choice she made, or both.

Because the truth is, every single woman who is sexually active, healthy and in her reproductive years has the chance of getting pregnant, even if they are using birth control. Even if they do all the right things to prevent it, like the girl who had a condom break, then used the morning after pill, and still ended up pregnant. As much as we are different in so many ways, reproductive health, rights and options are something that we all have a stake in.

Abortion is fraught with so much negative sentiment, and in a sense, abortion is plucking a life from existence that has yet to have the opportunity to thrive. No one is claiming it’s pleasant. There is nothing black and white about abortion. It’s every shade of gray. But for us pro-choicers, the woman’s life trumps the embryo or fetus. That’s the bottom line. We place value on a woman’s ability to know what is best for her. It simply needs to be a safe and legal option. When I started at the clinic, all I saw was the individual moment of pain, but over the years I began to see a much richer portrait — women coming out the other side, relieved, even if it was simply a relief to have the procedure behind them. They could go back to their lives.

Seeing every side, the whole complicated and profound process, I came out more pro-choice than ever. I started to see it from a purely biological standpoint. We were removing an unwanted growth to preserve the woman’s chosen course.

Pro-choice isn’t just about being able to choose whether to have a baby or not. It’s also about having choices and opportunities before you dedicate your life to a child, or overwhelm yourself with too many children. What if a new baby means the children you already have will go without? There are myriad variables.

Though most of us are not open about it, according to Guttmacher.org, “About half of American women will have an unintended pregnancy, and nearly 3 in 10 will have an abortion by age 45.” But because there is a societal expectation for women to embrace motherhood no matter the personal cost, and the shaming of the anti-choice camp is so great, the act of terminating a pregnancy becomes some dirty little secret, when in truth it’s a secret many women share.

My time working as an abortion assistant and counselor taught me that grace can be found in the unlikeliest of places. I saw the deep thread that binds us. When we support each other in our darkest hours, our shared struggles can be overcome by our shared strength.

Amy Beeman is a Florida-based freelance writer and a contributor at cltampa.com. She has been published in BUST Magazine.