“What this is really about is bigotry": Atheist guest shreds Fox News panel's "religious freedom" argument 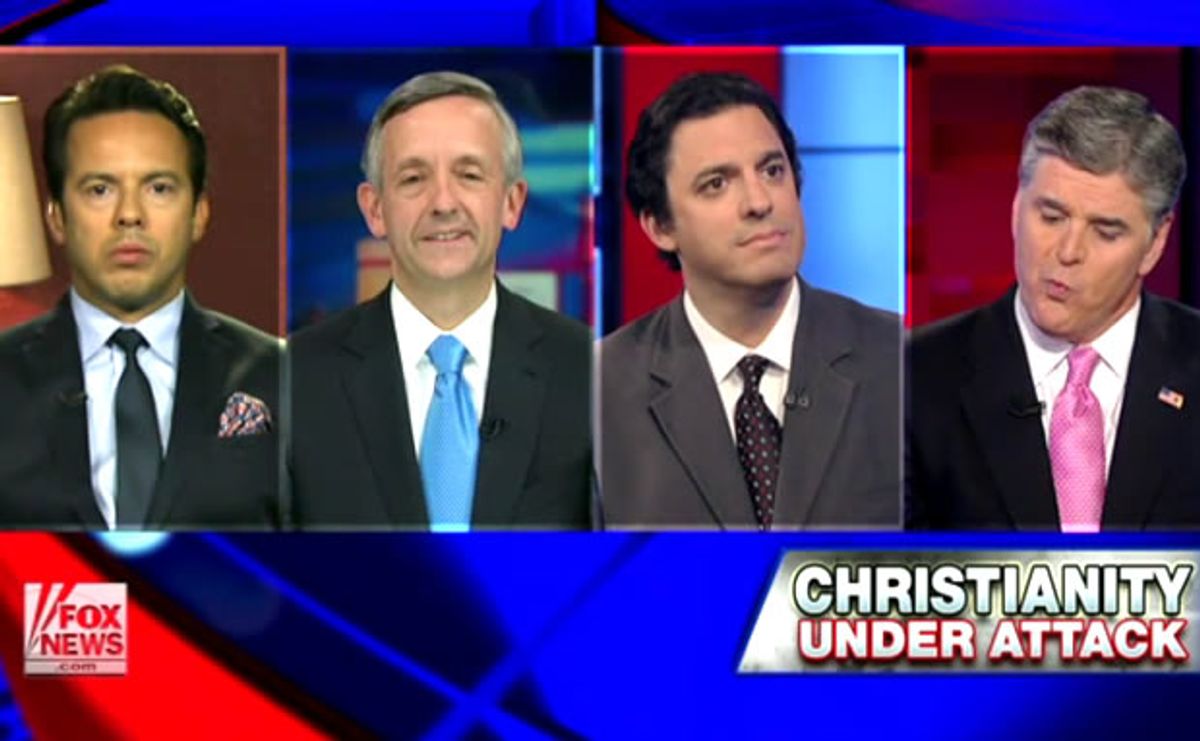 On "Hannity" Wednesday night, the Fox host invited the president of American Atheists on a panel with two pastors and, as you would expect, the conversation quickly turned ugly.

Sean Hannity began by playing a clip of Marco Rubio's recent remarks that "we are at the water's edge of the argument that mainstream Christian teaching is hate speech." He then asked American Atheists President David Silverman if there was any truth to that.

"There's nobody out there trying to get Christian preachers to marry people against their will," he replied. "What this is really about is bigotry, and you and I can both agree that bigotry is wrong, bigotry is ugly, and bigotry is stupid." After a moment of what was, for Hannity, unsatisfying cross-talk, the host turned to Pastor Robert Jeffress.

"If a priest does not want to marry a gay or lesbian couple because they're following their religious belief, is Senator Rubio right?" he asked. "Are we at the water's edge?"

Not surprisingly, Pastor Jeffress said Rubio "is absolutely correct," and proceeded to rattle off what he called a "fact" -- an interaction at last month's Supreme Court hearing about same-sex marriage. Jeffress claimed that U.S. Solicitor General Donald B. Verrilli Jr.'s answer to Justice Samuel Alito's question about the legal difficulties that states with same-sex marriage bans might face if the Court deems such bans unconstitutional proves that "the Obama administration is sending us a signal that they are going to come after those who believe in traditional marriage."

That it does no such thing -- it being an answer to a question during oral arguments at the Supreme Court -- went unchallenged, as Hannity allowed Jeffress to continue to talk over Silverman before passing the conversation to Dr. Samuel Rodriguez, who began by noting that he "completely agrees with Senator Marco Rubio."

"The moment in our nation when biblical truth becomes hate speech," he said, "America as we know it will cease to exist." He compared the "legislative persecution" of Christians in America to the executions of Christians by ISIS, claiming that the former "always" proceeds the latter. "Today's complacency is tomorrow's captivity!" he said.

Watch the rest of the shouting match below via Fox News.