GOP's summer of sad stunts: The desperate, hilarious measures 2016 long-shots are taking just to get noticed

Want to get into the GOP debates? Prepare to humiliate yourself 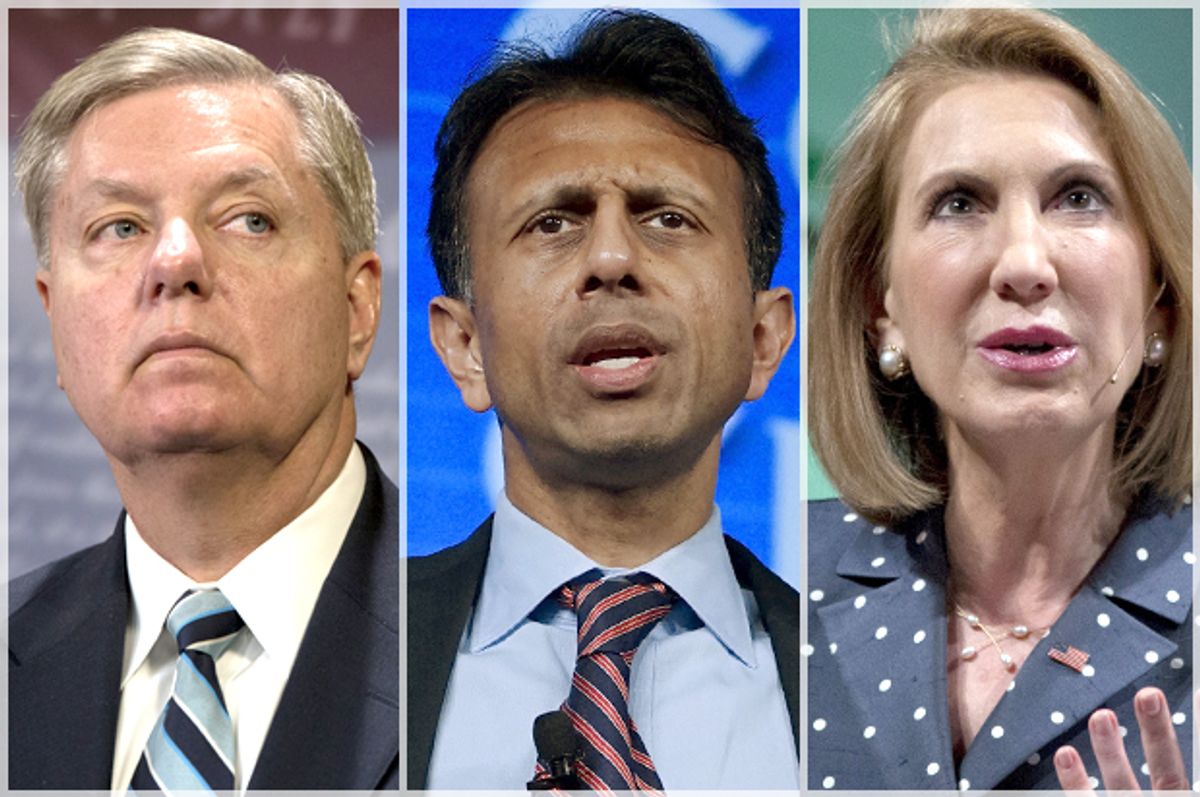 Now that the media organizations to which the GOP has licensed its debate rights are instituting participation caps, everyone's pissed off.

The party establishment can't be happy that candidates on the margins of the top 10 may accelerate their previous planned schedules for going Full Nutcase. The candidates on the margin, meanwhile, are worried that they'll have to spend more time saying red-meat nonsense on cable news instead of meeting voters in Iowa and New Hampshire. They may also have to blow precious funds on television ads during the summer instead of preserving those resources for December and January. (As Ed Kilgore writes in TPM, the competition for debate inclusion could effectively replace the role of the Iowa Straw Poll as an early winnower that exhausts the resources of less monied candidates.)

Right now the candidates in the 11-14 slots, per the RealClearPolitics national polling average, are John Kasich, Carly Fiorina, Bobby Jindal and Lindsey Graham. It will be up to them to resort to stunts to boost their name recognition and support ahead of the first Fox News debate in early August if they want to make the cut. They would have to increase their name recognition and support ahead of the primaries anyway, but the prime way to do that in the past was through the debates. That's how Herman Cain, Michele Bachmann and countless other brief front-runners did it in 2012. Now there's competition for exposure just to get into the debates, which are for exposure.

Let's look at how John Kasich, Carly Fiorina, Bobby Jindal and Lindsey Graham each spent their Wednesday. And then we'll leave it to you, reader: Does there appear to be a fog of desperation in the air?

Kasich and his team, according to the Washington Post, are going to announce their plans this summer. All indications point toward a run, because every Republican except John Bolton is running for president. If he runs he'll be gunning for Jeb Bush's "establishment moderate" lane. And to begin this quest to leech support from the former Florida governor -- as though there even is a whole lot of support for Bush right now -- he would like to make fun of the name of Bush's PAC.

Asked in the recent interview whether his message would be similar to Bush’s, Kasich said, “I don’t know anything about [Bush’s theme]. I really don’t. I’ve never listened to him. What’s “Right to Rise”? Getting up in the morning?”

Right to Rise is the name of Bush’s super PAC.

Randomly trolling higher-polling candidates is a popular stunt when you're desperate. It allows you to share some headline space with them. And randomly trolling Rand Paul on foreign policy is an especially popular stunt, because it's very easy. That's how Bobby Jindal spent his Wednesday, picking a fight with Rand Paul after the senator blamed foreign policy hawks for the rise of ISIS. The Louisiana governor released this hilariously buzzword-laden spiel against Paul -- from his official gubernatorial press office, no less. We'll quote it in all its humiliating glory:

"This is a perfect example of why Senator Paul is unsuited to be Commander-in-Chief. We have men and women in the military who are in the field trying to fight ISIS right now, and Senator Paul is taking the weakest, most liberal Democrat position.

It's one thing for Senator Paul to take an outlandish position as a Senator at Washington cocktail parties, but being Commander-in-Chief is an entirely different job. We should all be clear that evil and Radical Islam are at fault for the rise of ISIS, and people like President Obama and Hillary Clinton exacerbate it.

American weakness, not American strength, emboldens our enemies. Senator Paul's illogical argument clouds a situation that should provide pure moral clarity. Islam has a problem. ISIS is its current manifestation. And the next President's job is to have the discipline and strength to wipe ISIS off the face of the earth. It has become impossible to imagine a President Paul defeating radical Islam and it's time for the rest of us to say it."

It's time someone in the Republican Party showed the courage to go after Rand Paul's foreign policy! Prior to Jindal's joust, not one figure in the Republican Party had the temerity to criticize Paul's on-again, off-again relationship with anti-interventionism. Sure, there were the various candidates considering runs for president solely to troll Rand Paul, the several super PACs and 501(c)(4)s forming to trash Rand Paul, and that whole sub-industry of neoconservative writers and publications who've made the marginalization of Rand Paul their raison d'être. But nope, there really haven't been that many prominent Republican voices criticizing Rand Paul, aside from the entire GOP foreign policy establishment. Thank goodness Bobby Jindal has the stones to tell it like it is and argue that Rand Paul is bad.

One of those candidates who has based his campaign on trolling Rand Paul is Lindsey Graham. Graham's effect on the nomination contest will be to push the GOP toward higher vistas of reckless hawkishness, and he's already doing a bang-up job of it. For example: He was in Jerusalem on Wednesday and, for a brief moment, he suggested that he would take "violent" action against the United Nations.

JERUSALEM – Senator Lindsey Graham vowed on Wednesday to lead “violent pushback” against the United Nations if it “tries to take over the peace process” between Israel and the Palestinians, and against any nation that pushes to prosecute Israeli soldiers for war crimes through the International Criminal Court.

Mr. Graham, Republican of South Carolina and an all-but-official contender for his party’s presidential nomination, acknowledged on questioning that the pushback would not be literally violent, but perhaps virulent, in the form of withdrawing United States financial aid to nations or international institutions.

(Bless the New York Times for that clarification. Lindsey Graham 2016: Not Literally Violent, But Perhaps Virulent!)

But Ms. Fiorina quickly grew discomfited when the questions seemed to treat her more as a heckler pulling a stunt than as a formidable candidate making an otherwise significant campaign stop.

One reporter asked if Ms. Fiorina was being used by the men in the Republican field to harass Mrs. Clinton.

Ms. Fiorina insisted she had planned her trip here “many, many weeks ago, so perhaps she’s following me.”

It's going to be a fun summer.