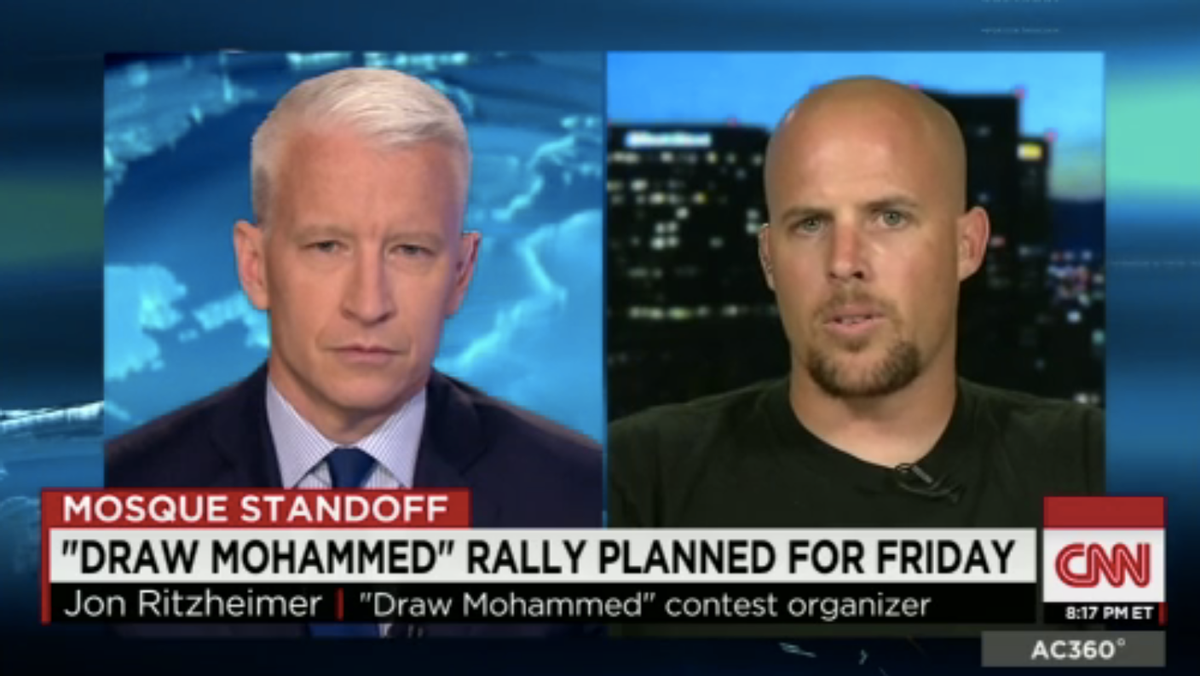 Despite the violent and fatal end to a "Mohammed cartoon drawing" contest earlier this month in Garland, Texas, it's happening all over again -- this time in Arizona. Former Marine Jon Ritzheimer spoke with Anderson Cooper about the "Draw Mohammed" rally he plans to hold outside a Phoenix mosque on Friday, telling the CNN anchor in a hateful and incoherent interview that he believes he is doing what is necessary to ensure his children "have a good future" -- even if the whole thing proves to be a bad idea.

"Some would probably argue that the signers that signed the Declaration of Independence was a bad idea back in their day," Ritzheimer explained early in the interview.

"So you're comparing yourself to the signers of the Declaration of Independence?" Cooper asked.

Ritzheimer claims he has already received several "credible threats" and that his family plans on going into hiding. But, when pressed to explain why he served in the military in Iraq -- ostensibly in support of establishing an Islamic government -- the anti-Islam event organizer became completely unintelligible and self-contradictory.

"Now that you're allegedly educated on Islam, you were supporting an Islamic government in Iraq, so you saying that Marines and others who are currently serving in Afghanistan and elsewhere are supporting terrorists?" Cooper asked.

"If their government is going to be run under Sharia law, then yeah, I don't support that," Ritzheimer responded.

Explaining that Islamic governments are not necessarily governed by Sharia, Cooper asked Ritzheimer to confirm whether he believes Islam is terrorism; the guest said no, then changed his mind.

"You don't believe that Islam, at its core, is terrorism?" the host asked.

Watch the entire confounding clip, via CNN, below: