GOP's diabolical health care scheme: What their Obamacare "fix" is really all about

A new paper explains why the Senate GOP's Obamacare "fix" wouldn't fix anything. That's the point. 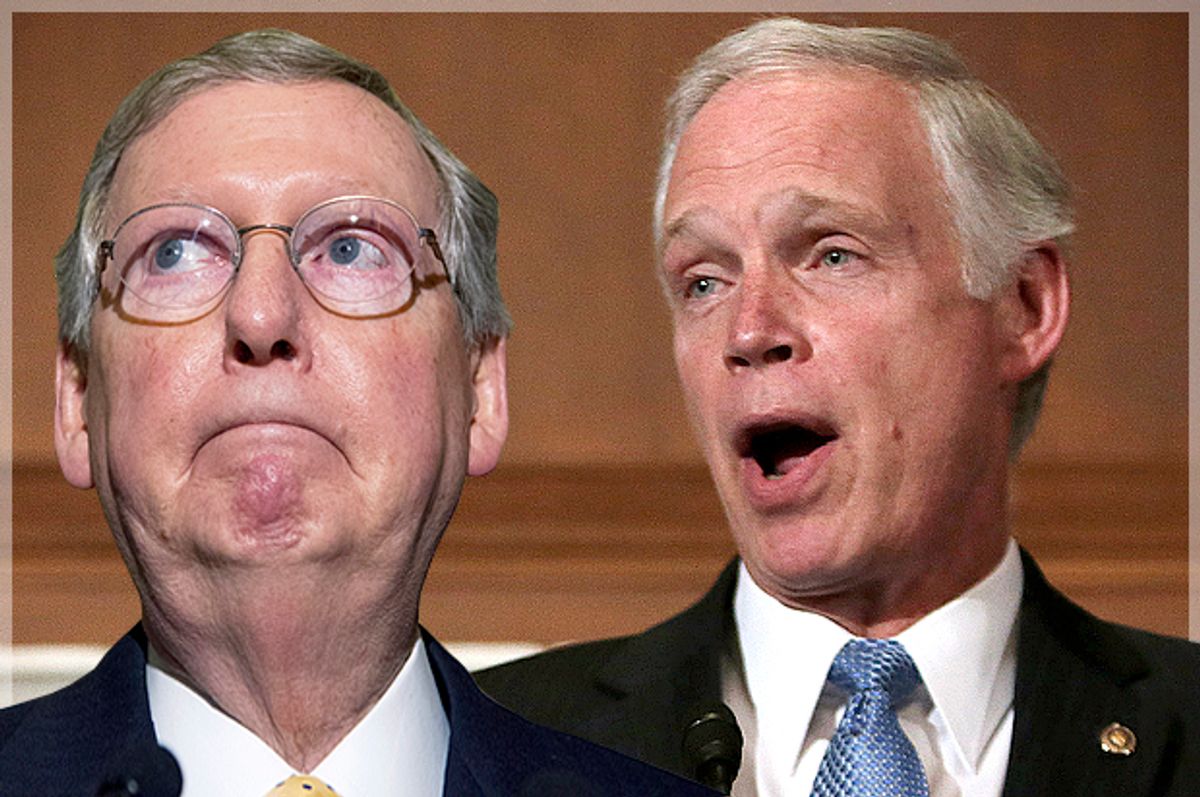 It is not new information. The brief is basically just another explanation of why the law is built the way it is, the same one we've been having for six or seven years now, to which Republicans' only response is "yeah, but FREEDOM!" If you're familiar with the basic workings of the law, as anyone who reports on it should be, then you do not need the American Academy of Actuaries to tell you that Republican plans to "fix" the ACA will really just screw it up, which is the point.

But anyway. What happens if the Court strikes down premium subsidies for the approximately three dozen states that use federally facilitated exchanges? "An immediate or near-term elimination of federal premium subsidies would cause massive disruption in the individual market," the Academy writes. "Potentially millions of people would drop coverage, and the average costs of those remaining insured would soar. Insurers could face solvency concerns, especially those for whom exchange business is a relatively large share of their book of business." People would drop their coverage, the individual mandate would be weakened as more could qualify for hardship exemptions, risk pools would be disrupted, those who need insurance would pay higher costs. Bad.

So then what about the alleged "solutions" that Republicans are throwing around, like those in the Ron Johnson bill?

First there's the item that Johnson is so generously willing to offer Democrats/millions of people with subsidized plans: a temporary extension of subsidies into 2017. "Even if a temporary extension of premium subsidies would help avoid disruption in the short term, it is likely that the disruption would be only delayed, not avoided," the Academy writes. Since the Republican plan is to temporarily extend the subsidies with the explicit purpose of "replacing" Obamacare with ??? in two years, it's just delaying the disaster.

In exchange for a temporary extension of subsidy availability, Johnson's bill would eliminate the individual mandate. Just asking for a "little bit of freedom," is he how puts it. Eliminating the individual mandate could "could threaten the viability of the health insurance market," the Academy warns. "When health insurance markets include guaranteed issue and modified community rating requirements to ensure that coverage is available to people with pre-existing conditions, market viability depends on attracting a broad cross section of risks." That's what the individual mandate is in there for -- to ensure that younger and healthier people purchase health insurance. It's not in there because Democratic lawmakers thought people would hold parades in the streets celebrating it.

The study has much more to say about the long-term Republican replacement idea: allowing people to buy insurance across state lines. Unless there are nationally recognized standards and regulations for health insurance plans, there would be a race-to-the-bottom in terms of plan quality, and sick people would be screwed. Johnson's bill, of course, would also strike Obamacare's essential benefit baselines for coverage provisions.

As we've already noted, Republicans' replacement plan is not sound policy. It is a political plan to break health insurance markets, then yell about how Obamacare doesn't work and has to be repealed. It is explicitly designed to score political points by replacing the popular subsidies in the short-term while permanently eliminating the less popular aspects that make the law function. By 2017, then, with health insurance markets failing, Republicans can either extract new concessions from a Democratic president or repeal the law entirely with a Republican president.

It would be nice if news outlets would stop playing naive about this. I found this brief via a piece at The Hill titled "Actuaries: GOP plans won't prevent an ObamaCare meltdown."

Republicans have spent months pitching ideas on how to limit the potential fallout from next month’s Supreme Court decision that could wipe out ObamaCare insurance subsidies in at least 34 states.

But so far, none of their proposals are likely to stave off the massive disruption of the healthcare marketplace that would result from a ruling against the Obama administration, according to a new report by the American Academy of Actuaries.

And I'm sure Ron Johnson and Mitch McConnell will just be shocked to see the results of this report, suggesting that their plan renders Obamacare inoperable. I'm sure that if it somehow passed, too, they'd absolutely accept the blame for the collapse of health insurance markets, rather than blaming it on the Democratic Party and Big Government.