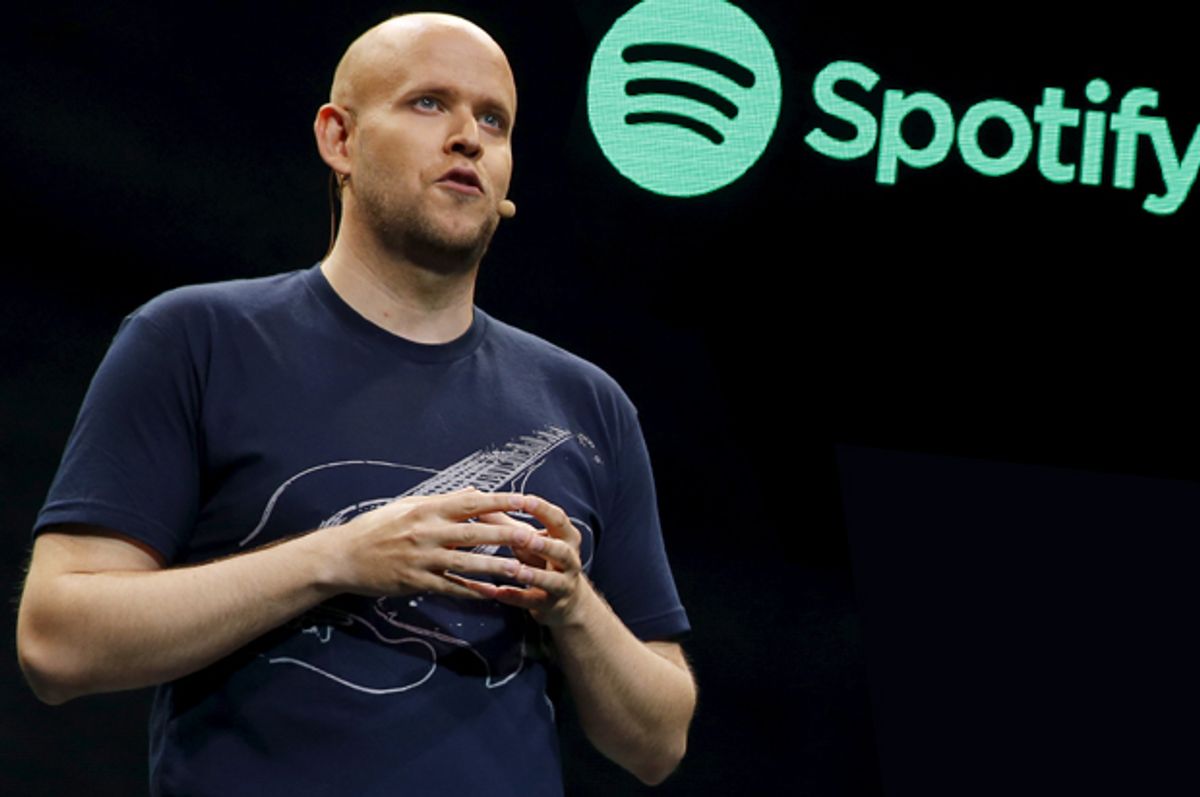 Things have changed so fast in the pretty much every aspect of the digital world that it probably should not surprise us that the battle for artists rights in the world of online music has shifted just as rapidly. And in some cases, the change means going back to ideas we thought we’d gotten past. More specifically, we’re talking about the way the conversation seems to be returning to the old notion of hating the record company.

Take a new piece on the site PopMatters, David McMillin’s “Why It’s Time to Stop Hating Spotify.” McMillin, part of the band Fort Frances, tells us: "As both an independent musician and a music fan, I’m here to give you a new headline: I believe Spotify is saving the industry.” He points out that his tiny band makes more than half of what the way larger Portishead earns – Geoff Barrow has said he made just $2,511 from 34 million streams – and that the problem is Portishead's label. From the Pop Matters post:

The difference is how each band delivers music to Spotify. We pay a flat fee of $49.99 per album per year to have Tunecore push our material to Spotify and 23 other digital download and streaming stores. Their cut? Zero. We keep every cent of our earnings. In Portishead’s case, their earnings are subject to the terms of their record deal. I’m not privy to those terms, but it’s safe to assume the label is taking a hefty portion of those profits. With this in mind, assigning blame to Spotify (or the number of other streaming services such as Rdio, Rhapsody, and Deezer) is pointing the finger at the wrong problem. The old adage of “the numbers don’t lie” doesn’t ring true; here, the numbers don’t tell the whole tale. The real antagonist, in this case, is likely Portishead’s label, Universal.

And McMillin comes back to the old “exposure” argument: “Outside of actual dollars and sense, Spotify delivers the intangible value of social currency. Thanks to its Facebook integration, users can easily discover new bands based on trusted opinions of their friends.” And so on.

The relationship between tech companies and music blogs is so shady that we can’t quite tell if this story came from a cash payout or if this is really the way this musician sees it. (Editor's note: PopMatters told Salon they were not paid for the story; Salon never intended to suggest that they were.) But it’s strikingly similar to lines we hear from Spotify founder Daniel Ek, who blames the middlemen, including in a recent press conference covered by the New York Post. “I don’t want to point fingers,” Ek said. “I think it’s more of a systemic thing.”

This echoes what we’ve been hearing from the Silicon Valley crowd about disintermediation and how the collapse of the old system would be great for the artist. We know how well that’s worked out. And it ignores the process of re-intermediation, as the Internet companies consolidate into a few corporate behemoths even worse than the old major-label structure, and keep the artists locked out of all the dealmaking.

There were certainly exploitative label deals and record company execs in the old model. But, the old-school, analog-age middlemen – not just people who work at labels, but record store clerks, editors at book publishers, journalistic critics – are rarely the people who get rich in the culture world.

Very few of them work on rolling, evergreen campuses where they get stock options and free sushi every day. Most middlemen are middle-class or trying to hold onto it. It’s the digital moguls — the Eks and the Zuckerbergs and the Bezoses — who are grabbing most of the revenues that used to go to the artists and building enormous headquarters that would be the envy of the emperors of ancient Rome.

Some streamers are better than others in the way they treat musicians, but the secrecy of the deals makes it hard to feel warmly toward any of them. Musician David Lowery used to be more worried about ad-sponsored piracy, he wrote recently on the Trichordist.

But over the last three years I’ve come to believe that Spotify is a much bigger problem.  Not only because of their low rates but because they deliberately use highly manipulative tactics, paid flacks, proxy organizations, leaked documents, and even paid bloggers to intimidate critics and counter criticism of their service.   As a former State Department employee remarked  “their public relations strategy resembles the playbook of an authoritarian regime.”  The real problem with Spotify is that you cannot trust them.

Some musicians have made their peace with the streamers, at least in part. A rough consensus has started to form – among musicians, artists-rights types, and, well, middlemen like music managers and publicists. Their position is that streaming is here to stay, but that it needs to be reoriented around paid subscriptions rather than free music, that musicians need to be able to opt out so that they are not giving their music away, that artists need to have a seat at that table when decisions are made, and that the finances (including equity deals between labels and steamers) need to be made transparent. There is a chance that the various parties can find a better way forward.

But blaming the labels – as implicated as they are – and cheerleading for Spotify doesn’t quite get us there.