Elizabeth Warren won't be president. But the Senate may not be her final destination.

Even the Draft Warren folks now accept it: Warren won't run. But she may have a new job come 2017 anyway 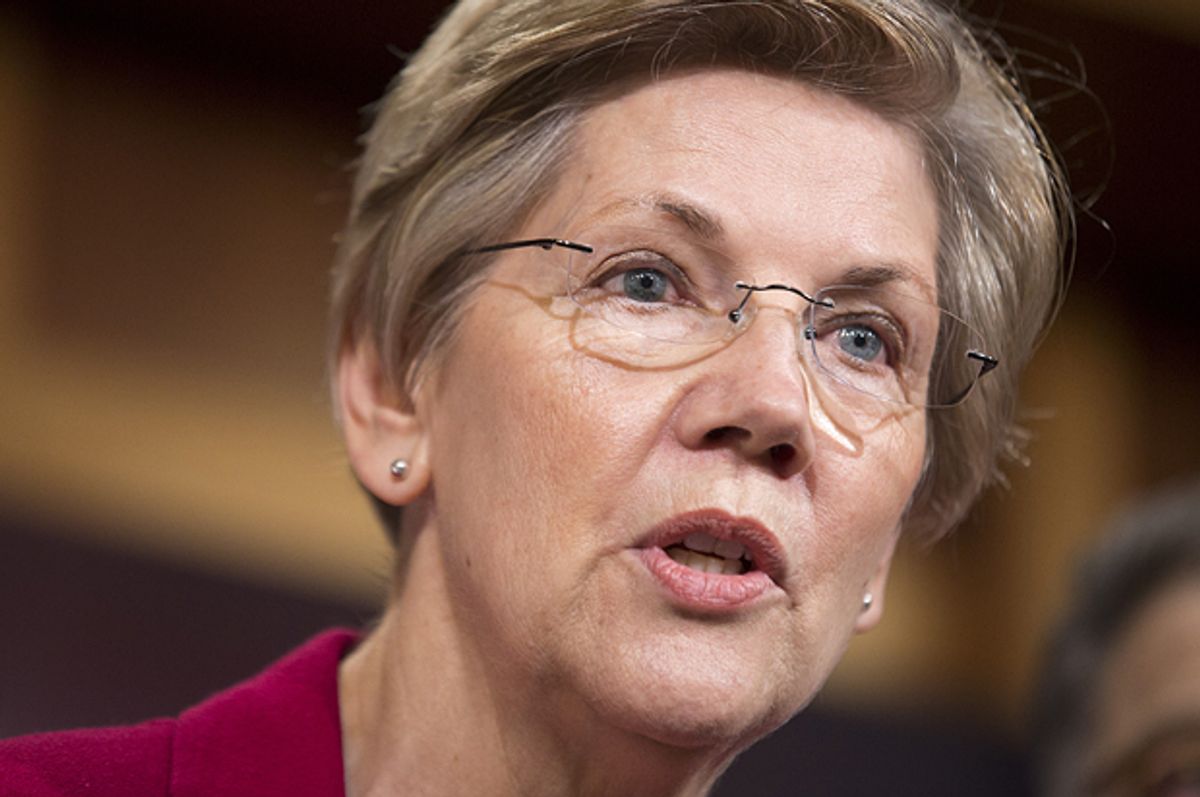 Several months ago, supporters of an Elizabeth Warren presidential candidacy detected some glimmers of hope in their bid to convince the Massachusetts senator and liberal favorite to take her fiery brand of progressive populism to the national stage. Though Warren insisted she wasn't seeking the nation's top job, political grammarians couldn't help noticing that Warren spoke only in the present tense. Sure, Warren may not have been "running for president" in October 2014, but who knew what mid-2015 held in store? While Warren was remarkably disciplined in sticking to her pat "I'm not running for president" response, she even spoke, rather cryptically, of "amazing doors that could open" down the road. Moreover, Warren's pre-midterm campaign swing -- notably including stops in Iowa and New Hampshire -- stoked speculation that it was the prelude to something larger.

But it was not to be. Even as organizers of the Draft Warren campaign raised funds and set up shop in early primary states, Warren herself never took any serious steps toward mounting a presidential run; she did not set up anything resembling a national campaign infrastructure, nor did she make any additional forays into early-voting states. In recent months, she became more emphatic in spurning entreaties to enter the race, even going so far as to couch her answers in the future tense. On Tuesday, the Draft Warren folks conceded to reality, with the campaign's leaders announcing that they would end their efforts next week, after they delivered one last plea.

For some of Warren's most ardent fans, this turn of events isn't quite as unwelcome as you might think. To be sure, many progressive activists dissatisfied with Hillary Clinton saw Warren as their only viable hope of dislodging the Democratic frontrunner. But amid the Draft Warren push, many of the senator's devotees maintained that she was right where she belonged -- holding bankers' feet to the fire, sounding the alarm about soaring income inequality, and holding presidents from her own party to account from her perch in Ted Kennedy's old Senate seat. Much like the late liberal lion, who represented the Bay State for 47 years, Warren could demonstrate that you don't need to be president to prove an effective agent for progressive change.

As my colleague Elias Isquith wrote here, Warren has already shown impressive dexterity as liberalism's legislative leader, most recently in her crusade against the Trans-Pacific Partnership trade agreement. Yet while we've come to think of Warren, in an astonishingly short period of time, as the most prominent congressional opponent of the Wall Street agenda, this was not the role she had envisioned for herself. In 2010, you may recall, Warren badly wanted to run the Consumer Financial Protection Bureau (CFPB) after it was established under the Dodd-Frank financial reform law; indeed, the bureau had been the Harvard bankruptcy expert's idea. The chance to lead a government agency devoted to fighting predatory financial practices seemed like a fitting capstone to Warren's career.

Fearing an arduous Senate confirmation process, however, President Obama opted against appointing Warren to head the CFPB; she would instead serve as a temporary special adviser as the bureau got its bearings. Keenly aware of the popularity she had attained blasting Wall Street malfeasance as head of the panel overseeing the post-crash bank bailout -- and smelling blood in her home state, where Republican Sen. Scott Brown's 2010 special election victory was widely regarded as a fluke -- Democrats offered Warren a Plan B: Return to Massachusetts and take on Brown in 2012, when he'd be seeking a full Senate term but would confront the blue tide of the commonwealth's presidential electorate. Warren was reluctant to make the race; she was an administrator at heart, and one who had never before sought elected office. Ensured of a clear Democratic primary field and mindful of how she could best play a role in overseeing financial reform, however, Warren decided to take the plunge, ultimately defeating Brown by eight points in one of 2012's most fiercely contested Senate races.

In the two and a half years since taking the Senate oath, Warren has found her groove as a legislator: peppering regulators and financial industry witnesses with tough questions in Banking Committee hearings; leading the charge against Obama Treasury nominee Antonio Weiss, a Wall Street veteran; and waging a valiant but ultimately ill-fated battle to strip last year's massive spending bill of a deregulatory provision derided as the "Citigroup bailout." Warren's name is not attached to any major piece of legislation, but in this age of obstruction and dysfunction, that's hardly an indictment of her. After last year's midterm drubbing, Warren assumed a new role in the Senate Democratic leadership, where she acts as liaison to progressive groups and helps hone messaging. Her clout and formidable army of supporters have also shaped the national political debate, as evidenced by Clinton's newly Warrenesque rhetoric on inequality and corporate power. Even Republicans now seek to tap into the discontent that helped propel Warren to political stardom, bemoaning the wealth gap but assiduously avoiding any serious policy proposals to address it.

But is this the role Warren wants? Many of her acolytes still seethe that she never won the CFPB appointment, arguing that she'd have won Senate confirmation if Obama had bothered to actually fight for her nomination. Watching Warren grill committee witnesses and deliver impassioned stump speeches at progressive conferences, it's clear that she relishes her current role, but it's also hard to escape the sense that given the choice, she'd readily accept an administrative role that allowed her to put her pro-reform proposals into practice.

That choice may well present itself come late 2016. Let's say President-elect Hillary Clinton wants to reassure Democratic liberals that her populist campaign proposals weren't mere election-season rhetoric; tapping Warren for a top economic post (perhaps even Treasury secretary) would send a surefire signal that her administration would follow through on progressive priorities like financial reform and tax fairness. For Warren, there's much to be gained by accepting such an appointment; she'd get to exercise the administrative muscles she'd hoped to use at CFPB, and if Republicans maintain Senate control in 2016 (as they're slight favorites to do), serving in a Clinton administration would offer Warren an escape from the frustration of serving in the Senate minority. What's more, an economic appointment would allow Warren to intensively focus on the issues that have defined her career.

That's not to say such a career move wouldn't bring disadvantages. Much of Warren's appeal lies in her willingness to publicly buck President Obama and other Democrats, but serving in a presidential administration would effectively require her to publicly support her boss's policies, even when she privately objected to them. Moreover, Democrats would be deprived of a star fundraiser and orator -- assuming Warren won Senate confirmation. In a closely divided Senate, that would be no walk in the park.

At any rate, we're a long way from knowing whether Warren is a serious contender for a top administration post. But Warren herself may be far from opposed to the idea. Asked by People Magazine last year whether she could see herself as Treasury secretary, Warren didn't exactly swat the notion down.