Laverne Cox is right about Caitlyn Jenner and rigid beauty norms: All trans women and men need to "be seen as ourselves and respected as ourselves"

Jenner's Vanity Fair debut is gorgeous, but doesn't reflect the reality for many 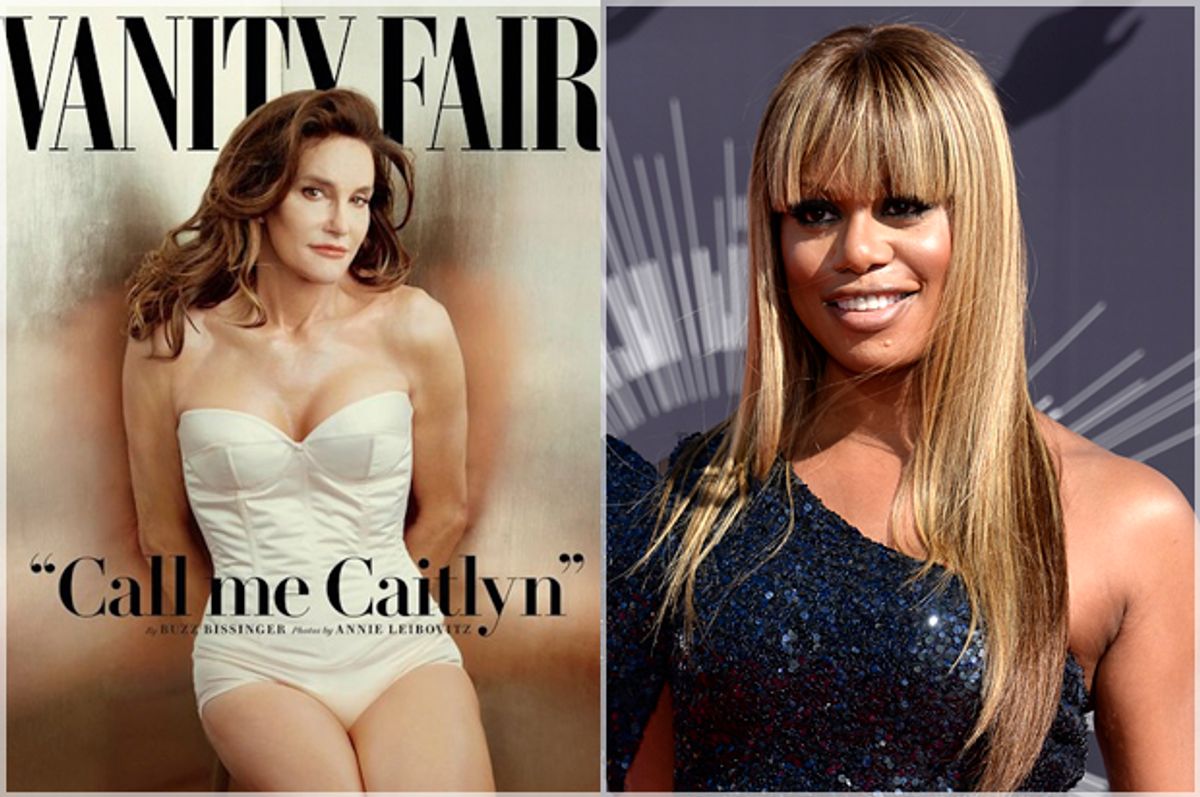 Yes, she's stunning. You don't make it to the cover of Vanity Fair without being arrestingly glamorous. With her long, tousled hair and movie star pose, Caitlyn Jenner, as shot by Annie Leibovitz for the magazine's June issue, looks for all the world like any previous notable cover star. She's even sporting a champagne-colored bustier, just like previous cover girls Kate Upton and Katy Perry. And after spending the better part of six decades "living a lie," the Olympic champion and reality star formerly known as Bruce Jenner deserves to look and feel as beautiful as she wants to be, and Vanity Fair deserves all due thunderous applause for putting a 65 year-old trans woman front and center on its pages and cover. This is a breakthrough moment in trans acceptance, and you'd better believe that you and I are privileged as hell to be witnessing it. Now let's just try to build on it, and extend that acceptance beyond the glossy and gorgeous.

Gender isn't just, as Jenner told Diane Sawyer earlier this spring, "my heart and my soul and all I do in life." As RuPaul once observed, "We're born naked, and the rest is drag." We define ourselves by our exteriors. So it makes sense that Jenner, as a wealthy television star, appears to now be leaning in the direction of a particular form of Beverly Hills beauty. She plans soon to go through what ABC refers to as "facial feminization surgery." That she can, as a trans person and a senior citizen, be sincerely called beautiful by the fashion world is a luxury that she possesses. When I first saw her Vanity Fair cover Monday, with a new chic look that recalls model Janice Dickinson — or, it has been observed, the lovely Jessica Lange — I couldn't help wondering what the response would have been if she'd been photographed looking more like Maura from "Transparent" instead. I thought of gorgeous, sexy trans man Aydian Dowling, and wondered what the journey is like for those who don't have his charisma and buff body.

You don't have to be transgender to comprehend that the world is a more pleasant place if you have money and looks. But as Laverne Cox so eloquently pointed out in her Tumblr post about Caitlyn Jenner Tuesday, "I must echo these comments in the vernacular, 'Yasss Gawd! Werk Caitlyn! Get it!' But this has made me reflect critically on my own desires to 'work a photo shoot,' to serve up various forms of glamour, power, sexiness, body affirming, racially empowering images of the various sides of my black, trans womanhood."

And Cox added, "A year ago when my Time magazine cover came out I saw posts from many trans folks saying that I am 'drop dead gorgeous' and that doesn’t represent most trans people…. In certain lighting, at certain angles I am able to embody certain cisnormative beauty standards. Now, there are many trans folks because of genetics and/or lack of material access who will never be able to embody these standards. More importantly many trans folks don’t want to embody them and we shouldn’t have to to be seen as ourselves and respected as ourselves. It is important to note that these standards are also informed by race, class and ability among other intersections. I have always been aware that I can never represent all trans people. No one or two or three trans people can. This is why we need diverse media representations of trans folks to multiply trans narratives in the media and depict our beautiful diversities."

And as Meredith Talusan asked Tuesday on the Guardian, "Do you applaud Caitlyn Jenner because she's brave, or because she's pretty?" She observed, "The financial resources and medical procedures that enabled Jenner’s beauty are inaccessible to the vast majority of trans women, who remain one of the poorest demographic groups in the country even as so many of us are in need of expensive medical services to feel comfortable in our bodies…. Let’s also notice how we may be thinking of her as 'more' of a woman because she presents herself now according to conventional standards of beauty – and thinking of her as more of a woman because she’s more conventionally feminine on the outside excludes the many trans women who don’t have the money to make themselves look like she does."

Jenner's triumph of external transformation, her ability to do so precisely to her specifications, is a result of having the means. And a trans woman who does not wear makeup or have long hair or wear gowns or undergo certain surgical procedures or isn't possessed of genetically-endowed good looks is still a woman, deserving of respect and dignity, just like a cis woman who doesn't do and have those things is.

We are still in a place in history where we don't have a large pool of high-profile transgender figures to look to, and as a result, the burden on them of representing the entire population is excessive. Caitlyn Jenner is an individual trans woman — she happens to be a rich, successful one. That doesn't negate her experience or the incredible power and courage of her gift to the world in sharing her experience so candidly. It just makes her unique. And progress isn't just applauding for the most aesthetically advantaged. It's loving and accepting everybody — the Caitlyns and Lavernes and Mauras alike.