"Bill Clinton was accused of rape," Kelly said, apropos of nothing 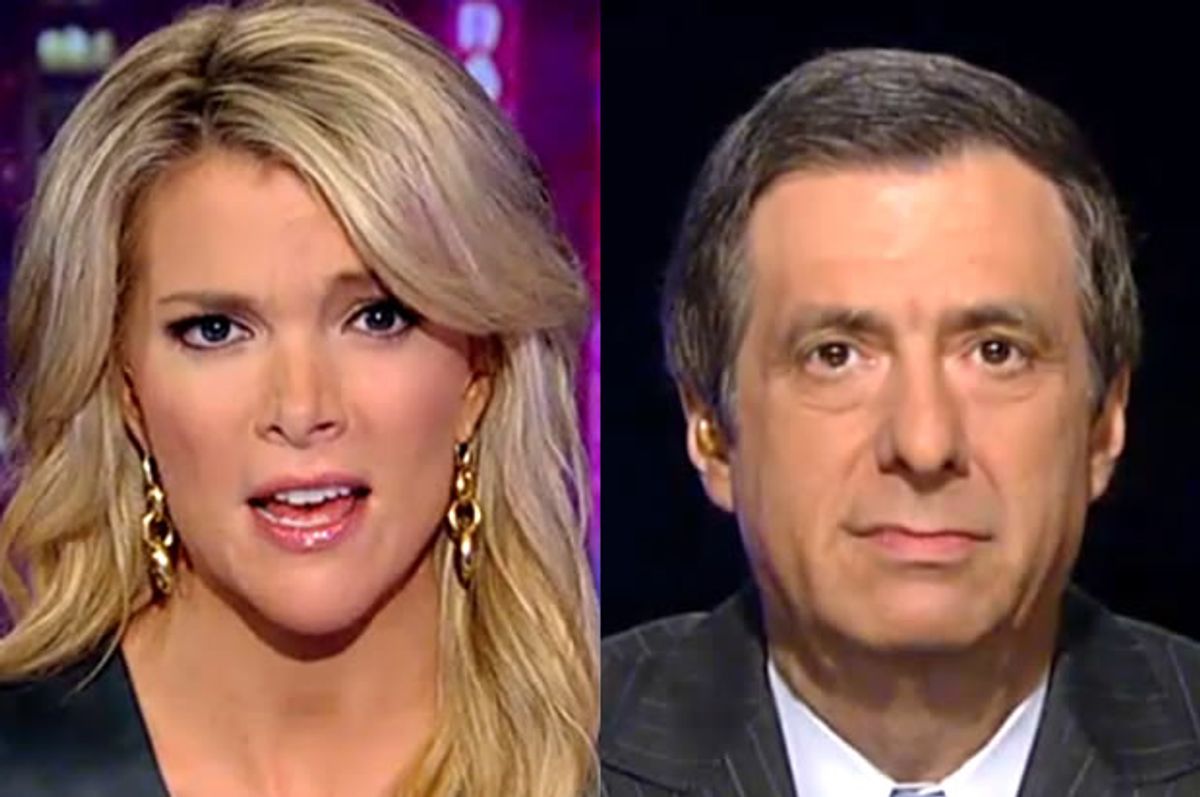 The pair accused Duggar critics of making hay of the situation, even as the web has been peppered with photos of accused child molester Josh -- formerly of the anti-LGBT lobbying group FRC Action -- canoodling with the 2016 Republican presidential candidates. Furthermore, Duggar family patriarch Jim Bob, ran for the Arkansas state senate as a Republican in 2002.

The segment began, however, as an advertisement for Kelly's upcoming interview with the family. In a statement, the family said that they would speak to Kelly in order to "share our hearts with you about the pain that we walked through as a family twelve years ago, the tears we all shed and the forgiveness that was given."

After playing a clip from "The View" in which the panelists applauded Fox News for sending Kelly to interview the Duggars because she is "tough but fair," Kelly said that while she'll "take that reputation...this isn't going to be a cross-examination of a family, it's going to be an interview."

She said that she merely wants what America does -- to hear the Duggars' side of the story. "What's remarkable to me," she said, "is how many in the media have handled it, from jumping from 'they're the worst, a house of horror, sick, sick sick' to this woman on CNN trying to make this the problem of the Republican presidential field."

After playing a clip of Poppy Harlow noting that most of the GOP candidates have posed for pictures with Josh Duggar, Kelly said that "Bill Clinton was accused of rape, accused by several women of sexually assaulting them, but the fact that a presidential candidate has posed with some random member of the family that's going through this issue is somehow a problem for the GOPers?"

Howard Kurtz agreed, saying that he's "been pretty disgusted by how some liberal media types are using what's obviously a family tragedy to score cheap political points." The real "media outcry" should not be about the hypocrisy of the Duggar family, but at the leaking of information about them to InTouch Weekly and The Arkansas Democrat-Gazette.

Neither Kelly nor Kurtz mentioned why the Republican candidates were posing with "some random member of the [Duggar] family" -- namely, that Josh Duggar wasn't a "random" person at all, as he was serving as the executive director of the FRC Action, the tax-exempt legislative wing of the Family Research Council.

Kelly's interview with the Duggars will air Wednesday night.

Watch Kelly's interview with Kurtz below via Fox News.