It's not just an unusually hot summer, it is climate change" said a top Indian official 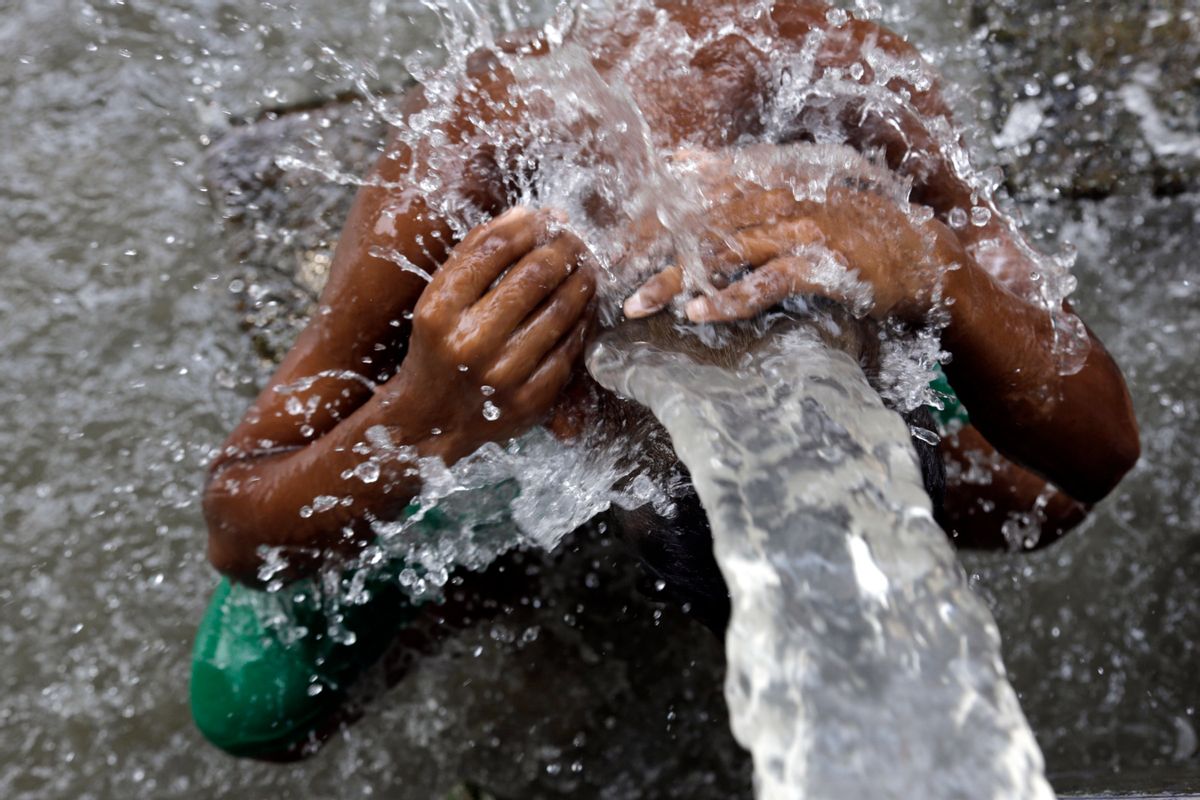 An Indian man bathes in water from a roadside tap in Kolkata, India, Sunday, May 31, 2015. Heat-related conditions, including dehydration and heat stroke, have killed more than 2,000 people since mid-April in the southern Indian states of Andhra Pradesh and Telangana, according to state officials. (AP Photo/ Bikas Das) (Bikas Das)
--

With more than 2,300 dead, India's living through the fifth-deadliest heat wave in recorded history, and it's earth science minister is placing the blame squarely on the shoulders of climate change.

"Let us not fool ourselves that there is no connection between the unusual number of deaths from the ongoing heat wave and the certainty of another failed monsoon," said Harsh Vardhan. "It's not just an unusually hot summer, it is climate change."

It would be jumping to conclusions to say that climate change caused India's heat wave, because scientists are unable to do that for any individual extreme weather event.

But Vardhan is right that it would be a far greater omissions to omit the climate context. Climate change is most likely making heat waves across the planet worse, and it will almost definitely make events like this more common in the future. Experts compare the impact of climate change on extreme weather to that of the steroid era in baseball -- the drugs can't be blamed for any one home run, but they can certainly be pointed to as a driving factor in the sudden, marked increase of home runs in general.

And as the term "global warming" suggests, the rising frequency of heat waves is one of the consequences of our greenhouse gas emissions we're most certain about -- heat is already become more extreme, and will continue to, at this point, regardless of the amount of fossil fuels we burn in the near future. And as we're seeing in India, they carry dangerous consequences. In the U.S., they're the leading cause of weather-related deaths, and per one study will kill anywhere from 1,400 to 3,500 additional people each year by the end of this century.

India, due to both its geographic and economic position, is in a much more vulnerable position, as the Guardian recently reported:

As the heatwave in India shows, those who have to work outside in hot conditions are at the greatest risk of heat exhaustion and heatstroke. There are reports that construction workers in the Indian city of Gurgaon had no choice but to continue working all last week in temperatures higher than 43C, in order to earn their wage of 200 rupees a day (about £2).

“If everybody had the same lifestyle as Europeans and Americans, it wouldn’t be so much of an issue, but most of the food that is generated and grown in south-east Asia, Latin America and parts of Africa comes from small landholders,” said Mark Maslin, professor of climatology at University College London (UCL).

“In the south of the US people in air-conditioned tractors are farming vast areas in an industrial way, but most of the world works on smallholders producing enough food to feed themselves and enough surplus to provide food for the local towns and cities.”

As Climate Progress notes, the U.N.'s Intergovernmental Panel on Climate Change predicts with high confidence that the combination of climate change and population increases will increase the risk of heat-related mortality, particularly for outdoor workers and through water shortages.

The link between climate change and the monsoon is more difficult to parse out, but scientists believe a changing climate will lead to both longer dry spells and heavier rainfall when it does occur, the latter posing a whole separate set of risks.