Watch out, climate deniers: These are the tricks to making sure good science wins the day 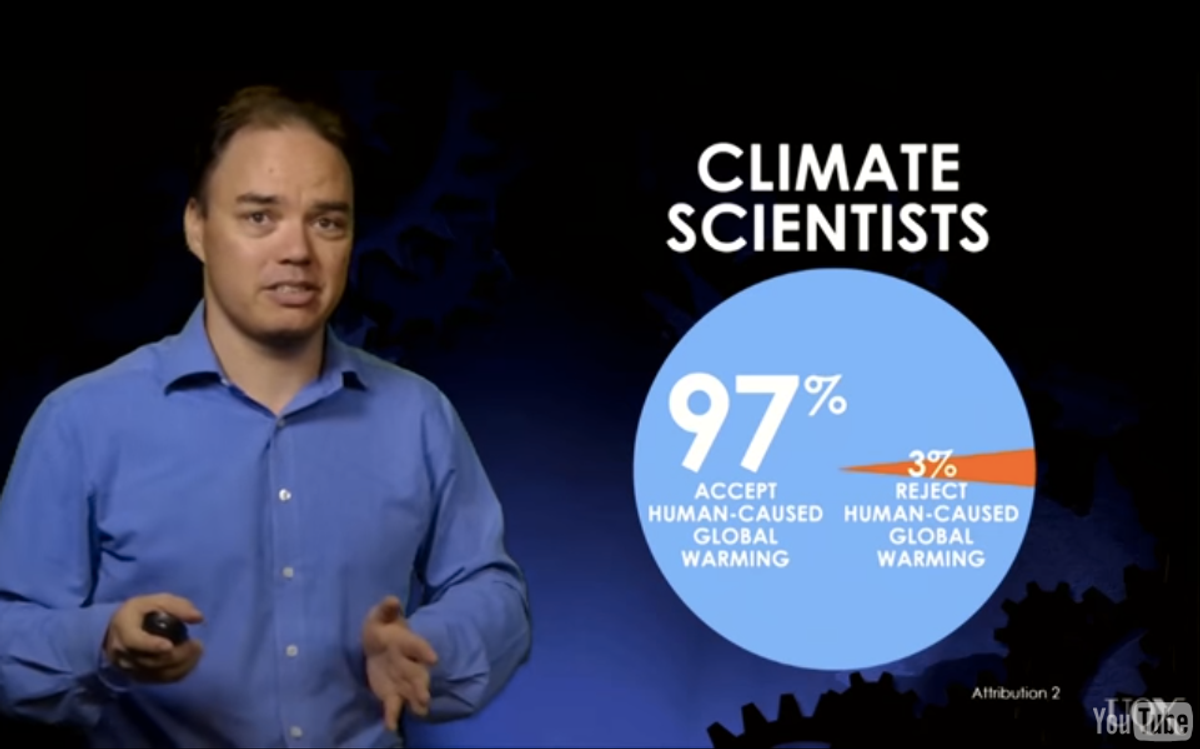 You probably suspected this already, but climate deniers aren't just going to change their minds once you present them with the facts.

That's why the sixth and final week of Denial101x focused on what is perhaps the most important question: "What is an evidence-based, scientific response to climate science denial?"

It turns out, the best way to debunk deniers is to use the very tool they so readily reject: science. But it doesn't exactly work the way you might imagine. Whether we're talking about climate deniers, creationists, anti-vaxxers or people convinced that there were WMDs in Iraq, John Cook explains, "A growing body of research, across a range of issues, shows that evidence that threatens someone's worldview can actually backfire and strengthen people's beliefs."

You can imagine how frustrated, and sometimes disheartened, climate scientists must feel:

So what does the science say we should do about this? Here are some key insights from climate denial school:

-Sometimes it feels strange to be taking part in a massive online course that's committed to taking on a very tiny minority. That's right -- there are a lot fewer climate deniers out there than you might think. (That they're given so much space on the Wall Street Journal's editorial page certainly helps them appear more common than they actually are). And it turns out, they're also a much smaller group than they themselves believe. In his lecture, Cook points to a 2013 study of climate opinion in Australia, which found that 7 percent of people in Australia don't think global warming is happening at all. The general population guessed the number of climate deniers among them was more than three times that. More strangely, the people in that 7 percent group guessed that 49 percent of the population shares their anti-science views. Experts call that the "false consensus effect," and it demonstrates yet another way in which climate deniers are divorced from reality.

The media definitely plays a role in perpetuating these misconceptions. Here's data from Cook's own research on how exposure to just one article containing false balance affects people's perception of the scientific consensus on climate change: -How do we protect the population against the pernicious, outsized influence of climate deniers? By getting everyone vaccinated, of course. It's called "inoculation theory," and it was the impetus for this entire course. Here's how it works: Cook describes scientific information as "vitamins" -- they "give people the facts they need for a healthy understanding" -- and exposure to anti-science information as something akin to a flu shot: a weak version of a myth that is then debunked, so people will have the tools to fight that myth the next time they come across it/turn on Fox News.

This isn't what people who argue that schools should "teach the debate" are intending, but research actually shows that "misconception-based learning" is far more effective than education that's based solely on the facts. The idea is to teach the controversy, but then help students understand why myths are scientifically inaccurate. In experiments, students taught this way end up with a firmer grasp of the facts. "Of course, we need to teach the science," Cook explains. "But that's only half the picture. We also need to explain how that science can be distorted."

-Even the best-intentioned attempts to combat climate denial can, if not approached correctly, fail to convince the people they're aimed at -- or even worse, can end up perpetuating the myths they were trying to debunk. That's why this lecture gave me considerable pause:

Uh oh: I've definitely been known to put the emphasis on the myth in my headlines -- to me, it's just also seemed so obvious that I was calling out the foolishness of people who believe that climate change is just the Earth "settling down" after the Great Flood, or that the polar vortex was a hoax invented by liberals to serve their "global warming agenda." And I can't deny that headlines like these generate a lot of clicks; an important factor to consider, much as I'd like to pretend that my writing is solely in the service of debunking anti-science.

Fortunately, putting facts in my headlines has worked for me, too -- that gives me hope that the media is capable of contributing to the solution, if we're smart about our techniques. Taking a cue from Chip and Dan Heath, I'll be trying to focus on writing stories that are simple, unexpected, credible, concrete, emotional and story-driven -- all factors that should make for good journalism, too.