Rick Perry's cartoon country/rap mashup: Is this ridiculous song the key to his campaign?

Does this new mashup mean the GOP has left its race-baiting Southern Strategy behind forever? 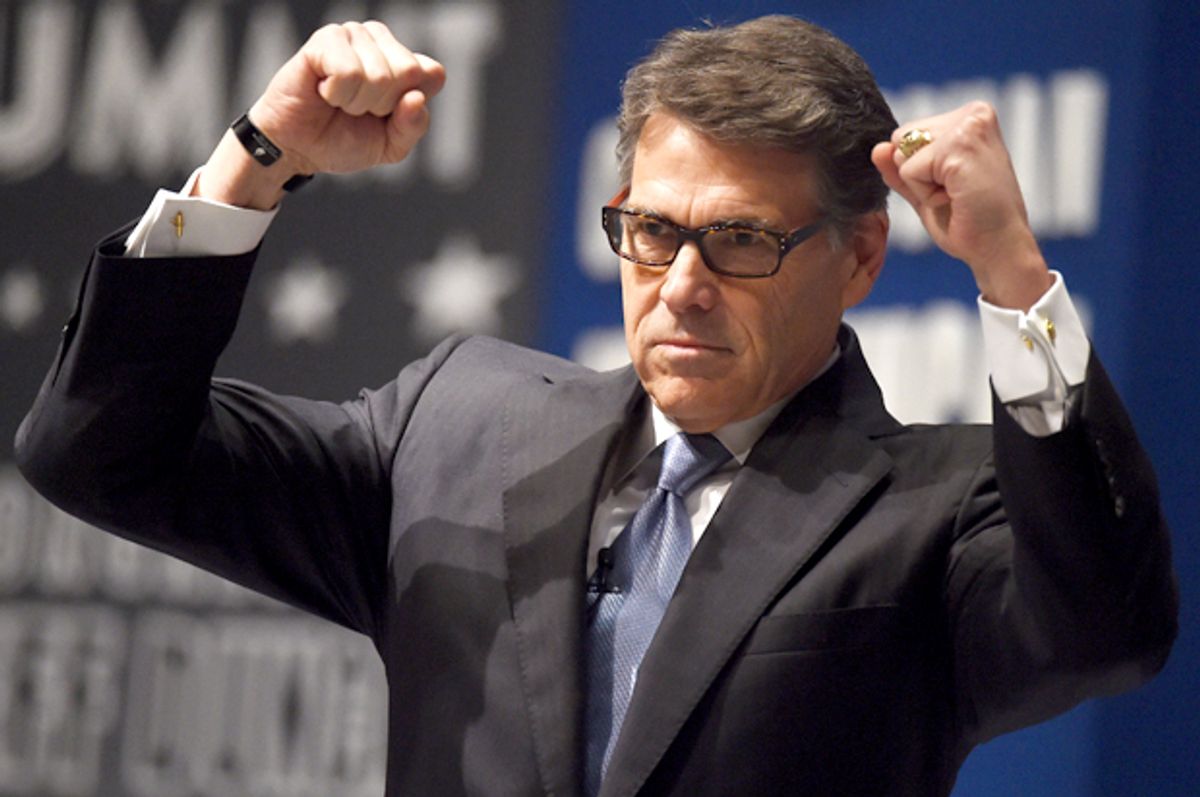 For a long time – almost 50 years now – the Republican Party had a solution to winning elections in a divided nation and especially in a region that had long been dominated by the other side. The “Southern Strategy” started going in the 1960s, but GOP strategist Lee Atwater described it perhaps most eloquently in 1981:

You start out in 1954 by saying, "N*gger, n*gger, n*gger." By 1968 you can't say "n*gger" — that hurts you. Backfires. So you say stuff like forced busing, states' rights and all that stuff. You're getting so abstract now [that] you're talking about cutting taxes, and all these things you're talking about are totally economic things and a byproduct of them is [that] blacks get hurt worse than whites. And subconsciously maybe that is part of it. I'm not saying that. But I'm saying that if it is getting that abstract, and that coded, that we are doing away with the racial problem one way or the other. You follow me — because obviously sitting around saying, "We want to cut this," is much more abstract than even the busing thing, and a hell of a lot more abstract than "N*gger, n*gger."

So this dog-whistle strategy worked pretty well, and helped make the Republicans into a heavily white party even in a racially diverse nation. But things seem to be changing in recent years: The visibility of wack-job black Republicans like pizza king Herman Cain and surgeon Ben Carson show that the GOP can reconcile voter suppression, gerrymandering and the rest of the familiar bag of tricks with black presidential candidates. Sen. Ted Cruz’s alleged love of Tupac Shakur seems like another step toward a kind of “we love you people” strategy.

Still, nothing prepared us for this: Rick Perry’s rap song.

Now, this number that was used to launch Perry’s candidacy is not just a rap song, but a rap/ country mashup of sorts that combines two musical styles and two lineages of resentment. Musically, it’s a disaster – somewhere between Kid Rock on cough syrup and Bubba Sparxxx on expired Quaaludes. But it also may show a way forward for the GOP. Or maybe, just a new way of going backward.

Here’s the song, which BuzzFeed calls “a rap song that turned into a country song about Rick Perry.”

The lyrics alternate between a rap verse and a country verse. First, the rap: “Rick Perry supporter, let’s protect our border / To hell with anyone who don’t believe in the USA / Rick Perry all the way.”

Then, the country part, which is a kind of cartoon of contemporary Nashville and includes a glancing reference to George Zimmerman’s favorite law: “I won’t back up, I don’t back down / I been raised up to stand my ground / Take my job but not my guns / Tax my check till I ain’t got none / Except for the good Lord up above / I answer to no one.”

In some ways, this is the usual nonsense: The conservative appeal to Southern whites has often been about how your tax money will go to “those people” (wink, wink, nudge, nudge) and to evil bureaucrats up north, despite the fact that the federal government sends enormous amounts of money to the South, much of it to white people who are in the armed forces, unemployed or on disability. Louisiana, Alabama, Florida and South Carolina are especially good at draining federal coffers. “The Palmetto State receives $7.87 back from Washington for every $1 its citizens pay in federal tax,” the Atlantic reported. But Perry rarely lets facts get in his way when bluster is more effective. And despite the line about ”the good Lord up above,” we thought this country was founded on a separation of church and state. Maybe Perry forgot that part, too.

The Perry song seems to be retrofitted from Colt Ford and JJ Lawhorn’s country-rap “Answer to No One,” which is sort of the 21st century version of the Aerosmith-Run D.M.C. “Walk This Way.”

Will this be enough to get the former Texas governor through what are likely to be – if history is any guide -- a number of awkward, belligerent and embarrassing moments? At this point, we can’t tell but something tells us this one will be fun to watch.