The plot against Obamacare: Scalia guts it at the Court, GOP sabotages it after in Congress 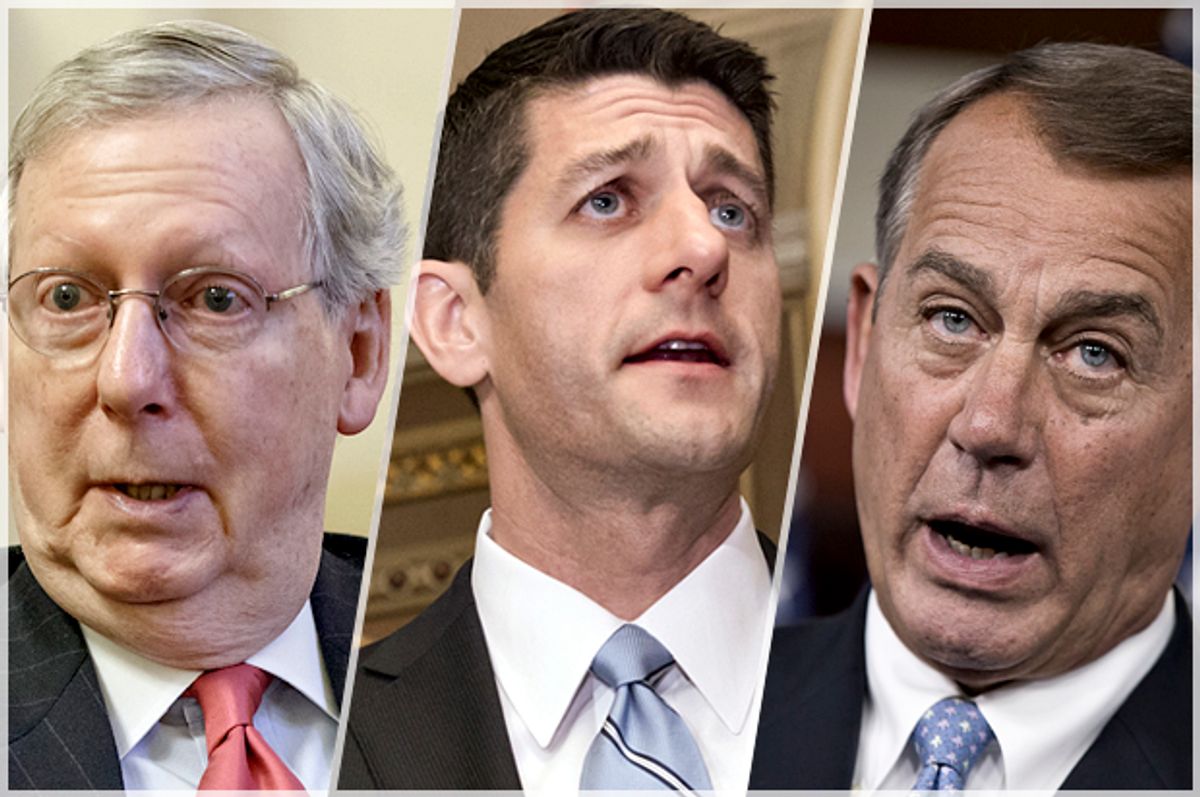 Here in Southern California we have a weather phenomenon this time of year we call "June Gloom." It refers to a marine layer that settles over the coastal areas at this time of year creating an overcast, cool climate through most of the month. This year, however, June gloom seems to be a national phenomenon among healthcare wonks and decent human beings who are anxiously awaiting the Supreme Court's ruling on the Obamacare lawsuit, King v. Burwell. It would have been hard to imagine just a couple of years ago that a fatuous argument such as that set forth by the plaintiffs in the case could ever make it past even the drunkest federal district court judge, but here we are. For those unfamiliar with the details of the case, it's summed up simply in this Fact Check:

The plaintiffs in this case — David King and three other Virginia residents — argue that the language of the ACA stipulates that insurance subsidies should only be available in states that set up their own exchanges, not states that rely on the federally run HealthCare.gov. The plaintiffs focus on language in the law about subsidies being available for those enrolled in an exchange “established by the State.” The federal government, meanwhile, argues that the law, as a whole, makes clear subsidies should be available for those enrolling in any exchange, whether established by the state or federal government.

Everyone involved in the drafting of the bill, including Republican Olympia Snowe, has said that the phrase "established by the State" was the result of a clerical error that happened when the House and Senate bills were merged. This is obvious to any sentient being since it would have made no sense whatsoever to create a federal exchange at all if only states that have their own exchanges could participate in the federal subsidies. It makes your head hurt to think about the fact that our judicial system would take such a case seriously.

But it did and the consequences could be very extremely serious. This isn't a constitutional question but rather a statutory one, so the Court could decide that the plain reading of the whole bill shows the intent of the Congress to allow people to claim the subsidies if their state declined to create an exchange -- the only sane interpretation. Or, if they wanted to make a point, they could simply say that the law was unclear or even make the completely ludicrous assumption that the Congress must have meant to create a completely useless federal exchange, deny qualified people subsidies and basically make the healthcare plan topple from its own weight. In either of those last events, the Court would essentially be sending it back to Congress where it would, in the normal course of events, change the wording in that one passage, pass it quickly and send it to the president, no harm done.

And that's what has so many people feeling that June gloom this year. If the Court does anything but accept the plain meaning of the statute, we are in big trouble. This is because everybody knows that we have as much chance of the Republican Congress properly fixing a passage in the Obamacare legislation as we have of the Congress deciding that the Guantánamo detainees should all be granted American citizenship. It's beyond imagination. If these times were normal the Court could simply throw it back to the legislature and wash their hands of the matter, feeling confident that the Congress would not be so crass as to create havoc in the economy or hurt millions of people simply on the basis of a technicality. But the the Court knows very well what the results will be. Sadly, few people can have any confidence that the majority of conservative justices gives a damn about that.

As everyone awaits the Court's verdict, many political observers are looking at how the fallout will affect the upcoming elections should the subsidies on the federal exchanges disappear. Clearly, the private healthcare market will be upended, probably nationally, but assuredly in the states where the subsidies would no longer be available. (The story of why those states declined to create their own exchanges is as cunning and underhanded as the rest of this twisted right-wing plan to ensure that millions of sick people are denied affordable healthcare.)

There's plenty of analysis out there that indicates many individuals will suffer and probably die. And the more optimistic of these observers believe that (if the Court doesn't do this in its ruling) Republicans will quickly pull together some sort of extension and transition so that people don't suddenly have the rug pulled out from under them.

Pessimists, on the other hand, see no evidence that the Republicans have any contingency plans in place and, in fact, assume the GOP sees this as a huge political opportunity. Yes, it's hard to imagine that a right-wing lawsuit that snatches health insurance out of the hands of millions of people and leaves them completely in the lurch could be a big plus, but these are Republicans we're talking about. And they have no problem turning rotten lemons into poison lemonade.

Jonathan Cohn at Huffington Post noted that despite promises from the likes of Paul Ryan, the Republicans have made no headway whatsoever on any serious legislation to fix the problem with conservative solutions. (That's because there aren't any.) He concludes with this:

Of course, the absence of a public effort to match the public rhetoric matters only if Republicans are actually serious about passing a plan. They may not be. Their real goals may be purely cosmetic -- to insulate the party from a political backlash should millions of people suddenly lose health insurance and, more immediately, to ease the anxiety of Chief Justice John Roberts and Associate Justice Anthony Kennedy, either of whom might hesitate to issue a ruling with such potentially devastating consequences to so many people.

The lack of hearings obviously doesn’t prove that Republican leaders have such ulterior, cynical motives. But it makes that theory a lot more plausible.

Republicans may try to pass a temporary patch for the subsidies, packaged with something like the repeal of the individual mandate, in hopes of drawing a presidential veto — so Republicans can then try to blame Obama for failing to fix the problem.

Today, the Wall Street Journal editorial page helpfully confirms that this idea is very much in circulation, urging Republicans to carry out this strategy. The editorial suggests Republicans rally behind plans such as the one offered by GOP Senator Ron Johnson, which would temporarily grant subsidies to those who lose them. Of course, conservatives may oppose any fix for the subsidies, because that constitutes government spending to expand health coverage and keeps Obamacare going. The Johnson plan would include repeal of the mandate, presumably to get conservatives to support it. Then the grand plan would unfold this way:

President Obama may refuse to sign any subsidies-for-deregulation deal, and he and Hillary Clinton may think they can win by refusing to compromise. But in that case the Johnson plan gives Republicans an answer that is easy to sell and understand, and liberals would then need to explain why they’re willing to deny health insurance simply because they want more political control over insurance.

If Obama vetoes the plan, Republicans have an “easy” way to prosecute the battle that will follow: Claim they offered a reasonable “compromise” designed to spare all those millions of people from getting thrown off of insurance, while lamenting that Obama refused to go along with it, all because of his intransigent refusal to let go of the throbbing black heart of tyranny at the center of his law.

I can see no reason why they would be afraid to do this. They have gotten away with much worse "shading of the truth" in recent elections. It's interesting that Wisconsin Sen. Ron Johnson is one of the few who have offered up a piece of veto bait because he was first elected in 2010 largely on the basis of an anti-Obamacare campaign against Russ Feingold. (2016 is going to be a rematch.) Like many other Republicans that year, Johnson ran a very clever anti-Obamacare campaign that was used all over the country: He ran against the Medicare cuts to providers that were in the bill.

This was done to scare seniors, of course. And one would have thought that after the Democrats had stood in defense of Medicare for more than 40 years, against repeated attacks from the right, that voters would have been a tiny bit skeptical of this sudden Republican concern for the program. But they bought it -- a lot of Republicans won their seats with that message. So Republicans have some evidence that if they frame a threat to existing healthcare cleverly they can persuade at least some voters that it's the Democrats who are out to take their insurance away from them, as counter-intuitive as that might seem.

In the end one hopes that the Supreme Court will simply do the right thing and rule that the subsidies were clearly intended to be available to people in states that made them use the federal exchange. As Dick Cheney would say, "it's a no-brainer." It shouldn't even be a question, really, and it's the fact that it is a question that's making people feel so gloomy. If this silly lawsuit could get this far, there's no telling how far the members of the Court will take it.  And if they throw it back to the Congress, we've got a huge problem on our hands.