"Why would you not frack on our own property and then prescribe it for other people in America?" 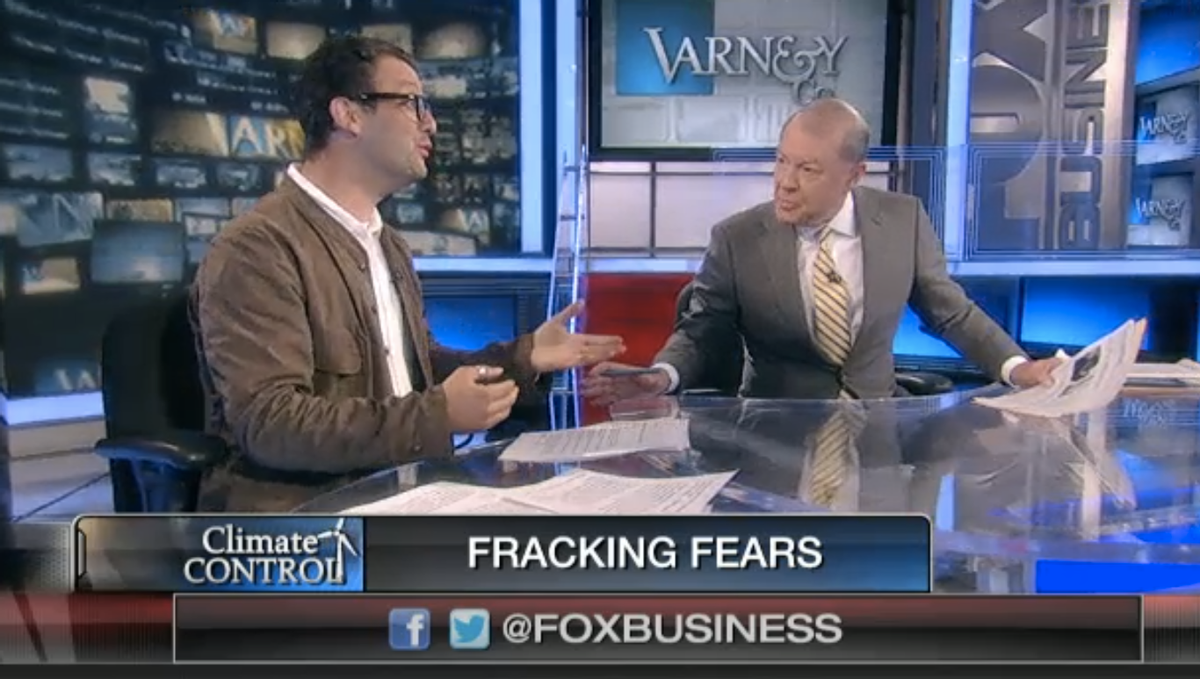 The long-awaited study on fracking and water contamination released Thursday by the EPA almost seemed designed to be misinterpreted -- even by those who know better.

Case in point: Fox Business host Stuart Varney, who went head-to-head with guest Josh Fox, an anti-fracking activist and director of the "Gasland" documentaries, and ended up tripping over his own hypocrisy.

On Varney & Co. Monday morning, Varney spun the report as a win for the pro-fracking camp, quoting the EPA's executive summary, which states: "We did not find evidence that these mechanisms [of possible contamination] have led to widespread, systemic impacts on drinking water resources in the United States."

But, as Fox quickly countered, that quote itself -- which has been seized upon by a number of media outlets -- leaves out a lot of important context. The study, by the EPA's own admission, is limited in scope: it was not intended to provide a comprehensive picture of fracking-related water contamination incidents in the U.S., in large part because there is no comprehensive database containing that information.

The study was originally supposed to provide the definitive answer for whether fracking pollutes drinking water. But as Neela Banerjee, who has been covering the story extensively for InsideClimate News, reported in March, a "long bureaucratic process" rendered it nearly meaningless. Based on interviews with "more than a half-dozen former high-ranking EPA, administration and congressional staff members" along with scientists and environmentalists, Banerjee concluded:

The EPA's failure to answer the study's central question partly reflects the agency's weakness relative to the politically potent fossil fuel industry. The industry balked at the scope of the study and sowed doubts about the EPA's ability to deliver definitive findings. In addition, concerns about the safety of drinking water conflicted with the Obama administration's need to spur the economy out of recession while expanding domestic energy production.

In a story published Sunday in the Charleston Gazette, EPA science advisor and deputy administrator Thomas A. Burke corrected the record: the message of the study, he said, was not that it proves fracking doesn't contaminate water. Instead, he explained, “the message of this report is that we have identified vulnerabilities in the water system that are really important to know about and address to keep risks as low as possible.”

Moreover, as Banerjee explains, the study actually confirms that there were "specific instances" when fracking "led to impacts on drinking water resources, including contamination of drinking water wells." It's the first time that the EPA has admitted this publicly.

So why all the confusion? On "Varney & Co.," Fox accused the EPA of attempting to soften the conclusions of its own study so as not to reflect poorly on the industry or the Obama administration's general support of fracking under its "all of the above" energy strategy. (The news that the Obama administration supports fracking was, for some reason, a huge surprise to Varney, who seemed dumbfounded at the very idea.)

Varney seemed to understand, however, what the report actually indicated about fracking's threat to drinking water. Off-camera, Fox claimed, Varney admitted that he wouldn't allow fracking on his property in upstate New York. Fox confronted him about it on the air: "Why would you not frack on our own property," he asked, "and then prescribe it for other people in America?"

"Because I'm in the watershed," Varney replied.

The interview more or less spiraled out of control from there, and ended with an irate Varney ordering Fox to get off the show. You can watch the entire debacle unfold here.