Memo to crotchety feminists: Caitlyn Jenner is a woman, and we must embrace her -- it's what's feminist and what's right 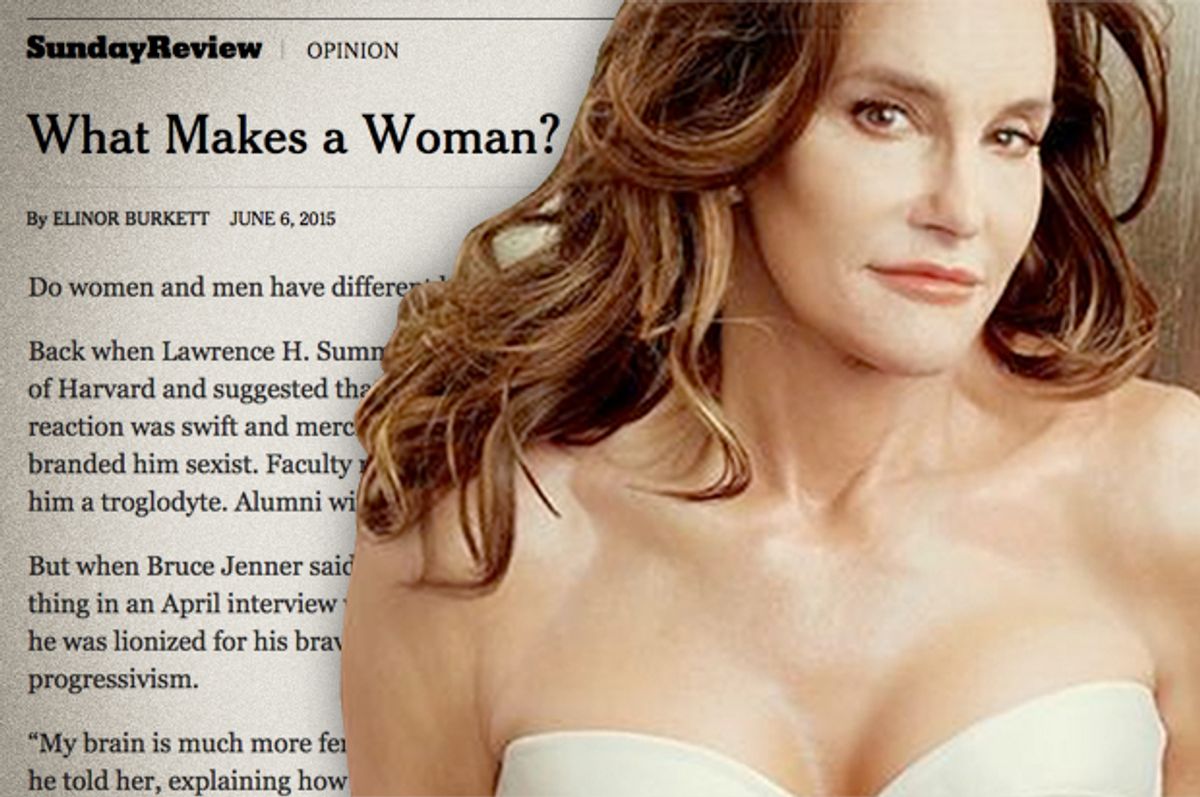 In her disturbing New York Times essay "What Makes a Woman?" published over the weekend, Elinor Burkett takes umbrage with Caitlyn Jenner, and with various actions of trans women. She accuses trans activists of undermining women’s identities and erasing women’s experiences. She seems to not quite believe that trans women are actually women — not just men wearing nail polish. Burkett strikes a tone (better left in 1950) of, “I’ll tell YOU what a woman is,” and she does so as a self-described progressive who has “fought for many of my 68 years against efforts to put women — our brains, our hearts, our bodies, even our moods — into tidy boxes.”

It is popular these days to say there’s no right or wrong way to be a feminist. Well, of course there is. Someone engaged in gender policing is doing it the wrong way. Let us not divide the world according to gender, let us divide it along those who are on the right side of history in regard to gender justice or not, who are on the right side of our common humanity or not. It’s time — far past time — that my fellow feminists and I called each other out on trans phobia.

The Times essay sinks to that level, and it smacks of a kind of exclusion that feminism has been repeatedly guilty of throughout the decades. Feminists should accept and embrace Caitlyn and all trans and gender non-conforming people and see them wherever they define themselves on a broad gender spectrum.  The project of ending misogyny and patriarchy is one that not only inextricably includes them, but should center around trans women, because the violence and rejection society throws at them is not for being a man, but for being an othered woman. Burkett’s misguided work is a sharp reminder that cisgendered allies like me need to listen and learn from trans and non-gender conforming people, and we must be willing to challenge other feminists on these topics when necessary.  We all need to work toward a feminism that is not centered on the idealized white, cisgendered, able-bodied, academic, middle- or upper-class woman.  It’s what’s right, it’s what feminist, and it’s what is humane.

Burkett’s piece defines “being a woman” as something that can only be achieved after sustained experience living openly as a woman. Burkett states, “People who haven’t lived their whole lives as women…. shouldn’t get to define us.” Is she claiming that Caitlyn isn’t a real woman now, but will be in 15 or 20 years after enough experience?  Decency and common sense call for recognizing as women those who identify as women. Shame on Burkett or anyone who tries to define what that is for others, or demands a litmus test for it. Further, it’s ridiculous to suggest that Caitlyn is defining women simply by speaking. No one woman speaks for all women — why is she accusing Caitlyn of that?

Burkett goes on to express anger — as so many feminists have done this week — with the way Caitlyn chose to appear on the cover of Vanity Fair in a corset and in the pages wearing a glamorized, femme look. Why is there outrage over this choice? Feminists urge women to enjoy their bodies despite age, and cheer at plus size models in lingerie, but we’re not so OK with a man who reveals his transition to being a woman in a traditionally glamorous way? What happened to the, “I hope I look that good when I’m her age,” esprit de corps I’ve heard in the past about older women on magazine covers? Why do we cheer Susan Sarandon or Tina Turner in sexy attire, showing a lot of skin, and then bring the hate for Caitlyn?

Yes, Bruce Jenner represented the idealized heterosexual male, but during all those years of fame Caitlyn had to keep her identity a secret. Where is our compassion for that struggle? Do we prefer our trans women to be impoverished young Democrats?

Burkett takes issue with Bruce Jenner’s statement to Diane Sawyer that, “My brain is much more female than it is male” (at the time of Sawyer’s interview, Jenner still preferred the name Bruce and the pronoun “he”). Burkett falsely equates this to the controversial statements by Lawrence Summers, former president of Harvard, on what he deemed to be innate differences in male and female brains. Sure, Bruce could have said, “I have a stereotypical woman’s brain,” and of course we don’t want anyone pigeonholed by real or pseudo sociobiology, but taking issue with Jenner speaking about his own experience — not influencing policy or discussing gender in the context of higher learning — is bashing a paper tiger. Burkett claims that Bruce Jenner perpetuated negative gender stereotypes about women and the notion of a female brain. But ironically, it is Burkett herself who offers a narrow, constricted notion of women — that those who are born women are the true women in her book.

Feminism has always had a problem being inclusive, but feminism that doesn’t include all women isn’t truly feminism. Feminism that is just about women — and not equality for all — isn’t truly feminism.  Sometimes it seems that we have learned nothing about inclusion from our troubled past. In 1969, NOW president Betty Friedan called lesbians “the lavender menace.”  She believed that including lesbians in feminist activism would undermine popular opinion of the women’s movement. In response, Gloria Steinem rightfully said, ”Feminism isn’t a PR campaign, it’s a revolution.” Numerous groups and factions rose up to challenge the women’s movement’s exclusion of and hostility toward lesbians.  Current feminist response to trans and gender non-conforming people carries with it horrifying echoes of those old wounds.  Burkett and her ilk responding to Caitlyn are not the first to say, “Feminism is for us, not them.”  Mainstream feminism has a long history of selling out women outside the frame of cisgendered, able-bodied, heteronormative, white, middle-class American women. It is our collective shame.

We must trust the experiences of trans and gender non-conforming people, honor their identities and embrace them as allies in this revolution.  Part of that work is understanding the need for inclusive language, something that tends to send Burkett and her cohort into paroxysms.  It is important to remove cisgender, white academic women's control over the narrative of all womanhood, gender and feminism. That shouldn’t be a threat to anyone.

Burkett claims the current landscape around trans issues is “impossible to understand.” No, it’s not. It’s what feminist women have been asking for for years: to be included. Why must we be inclusive of all when referring to, say, abortion? Because the word “women” doesn’t include trans men who sometimes get pregnant. (We women fought for the term "firefighter" even when there were few women in those jobs.) Inclusive language is the only cure against erasure. Don’t confuse the inclusion of trans and gender nonconforming people with the oppression of women -- the visibility of the former is not oppressive to the later. Similarly, women's visibility is not at odds with trans-inclusive feminism. The term “people” does not erase women.

So, memo to crotchety feminists: Please stop talking about inclusive language as something that erases you and your vagina.  Have and love your vagina, but don’t ascribe ownership of one to the trans sibling next to you, who may or may not have one. There simply isn’t anyone erased by using a word that includes everyone. The term “women” referring inclusively to trans women does not erase women. I am heartbroken and outraged when my feminist compatriots suggest otherwise.

Just as we are all expanding our definition of marriage as a union between two people instead of between a man and a woman, yes, we need to expand the definition of woman. This is not something to complain about — it is something to celebrate as the progress it is. In my adult lifetime I’ve seen the rape crisis center where I worked in the 1990s having to reconceive itself as it expanded to work with male survivors of sexual assault and child sexual abuse. I’ve seen feminists needing to shift to thinking globally when we talk about women, not just women in our home country. Of course this kind of rethinking isn’t new. It is the way free men had to reconceive themselves after abolition, and the way men had to reconceive who voters were after women’s suffrage.

If you say that you think trans women are anything less than or other than real women, you are betraying feminism and humanity. In 1969 I would have been on the side of lesbians and not Friedan, and I think we all want to think that about ourselves. This is our 1969 – we need to stand with trans and non-gender conforming people in opposition to Burkett and those like her and those that support such work.  This is the revolution.