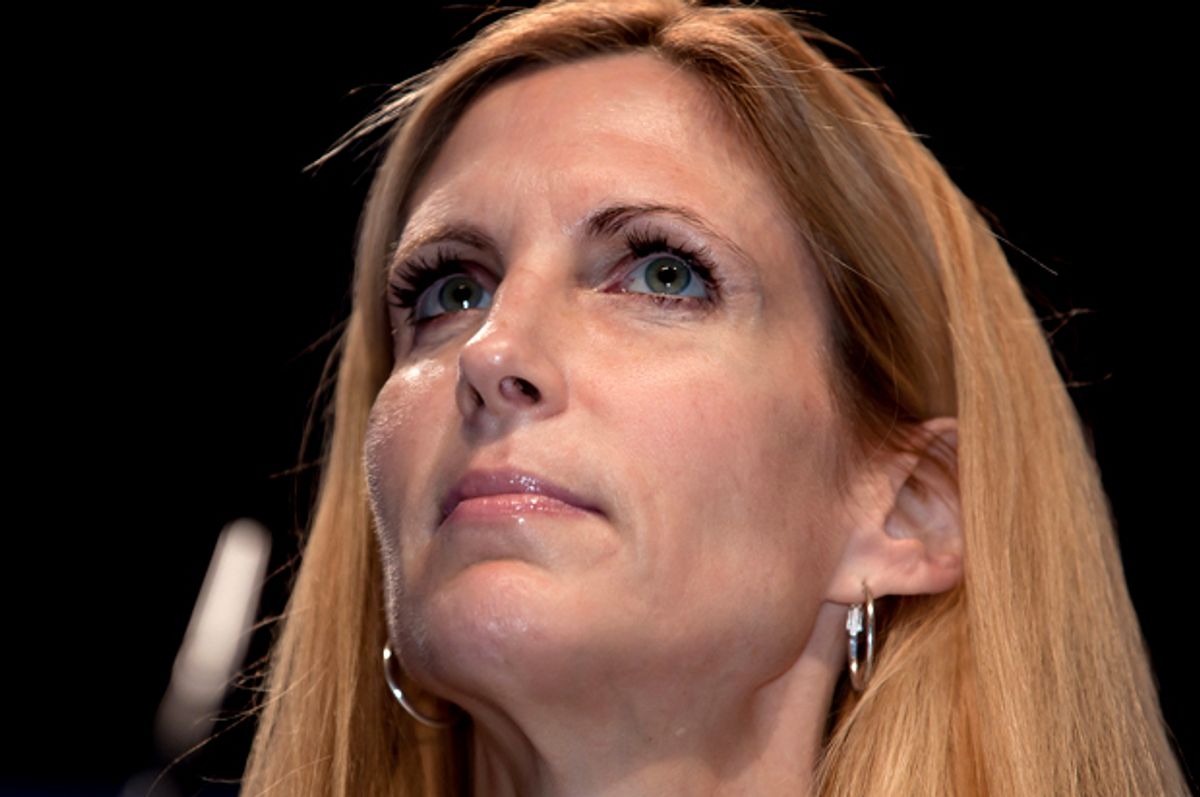 Ann Coulter's informal book tour of Fox News and other conservative media outlets for her latest screed, "Adios, America," has been a complete and utter train wreck -- which is, no doubt, exactly as she planned it. So why should we continue to pay attention to her? As Rachel Maddow said on "Countdown" the other night, "I know that Ann Coulter needs publicity in the same way that a tapeworm needs a large intestine. This is the environment that makes it possible for her to continue to make a living doing what she does."

Here, then, are the eight most awful things she's said in her increasingly desperate attempt to draw attention to her favorite subject -- herself.

1. "There's nothing unconstitutional about literacy tests

On "Fox & Friends" in mid-April, Coulter hadn't yet published "Adios, America," but she was already selling its arguments, telling co-host Brian Kilmeade that she's bothered by the fact that her vote counts as much as that of an uneducated immigrant. She said she'd love to make it "more difficult to vote," but "instead, we have ballots being given in 124 different languages. And I’m pretty sure Senate debates will not be taking place in Urdu. So, what are they voting on?”

2. "I want to see the 'innocent' person in prison"

Coulter accused President Barack Obama and First Lady Michelle Obama of creating a climate of racial divisiveness "in order to keep a certain segment of the black population angry and voting against Republicans." While not directly germane to her book -- which, as she insists with punishing regularity, is about the deleterious effect of legal immigration on American democracy -- it still touches on her central point, which is that the majority of people who vote shouldn't be voting because they cast ballots that are in their best interest instead of hers.

She blamed the late Senator Ted Kennedy for Obama's presidency, because he and the Democratic Party supported the Immigration and Nationality Act of 1965. It was, she claimed, "an evil-genius plan to change the country...Obama never could have been elected in this country but for Teddy Kennedy’s immigration act. Never, never, ever, ever!" Coulter did, however, spread the blame around, saying that "as for these idiot Tea Partiers or whichever conservatives are idol-worshipping Ronald Reagan, he was great for his time, but it was a different world. I don’t think he’s going down as the greatest president when he signed an amnesty law.”

In what was her first official junket for "Adios, America," Coulter compared legal immigrants to ISIS and refused to hug an immigration activist who wanted to demonstrate the shared humanity of people on both sides of the debate.

And she said that, too.

6. "Never in world history has a country been transformed like this"

Coulter is decrying the influence of legal immigration on American culture, which she claimed is "a plan by those on the left to have more voters favorable to liberal polices." So how does this plan work? "There are hundreds, probably thousands, of activist groups working overtime to bring the poorest of the poor into America, and they’re always the people who don’t particularly like America, who call us ‘racist,’ ‘sexist,’ ‘homophobic.’"

7. "The only way Republicans win is by driving up the white vote"

This was a moment of refreshing honesty, but it didn't sit well with Bill O'Reilly. "So we should write off the Hispanics?" he asked. "Not write off," she replied, "but how about for once appealing to your base? Democrats don’t obsess over how to get gun rights voters to support [them] a tiny bit more," nor do they worry about how to get "a slice of the evangelical vote."

8. "When I’m in charge of immigration, I will not admit overweight girls"

Just because you haven't eaten anything but ice cubes and Nicorette since 1989, let's not take out our issues on other people, okay, Annie? Here, have a Snickers bar. You turn into kind of monster when you're hungry. Which is, obviously, all the time.