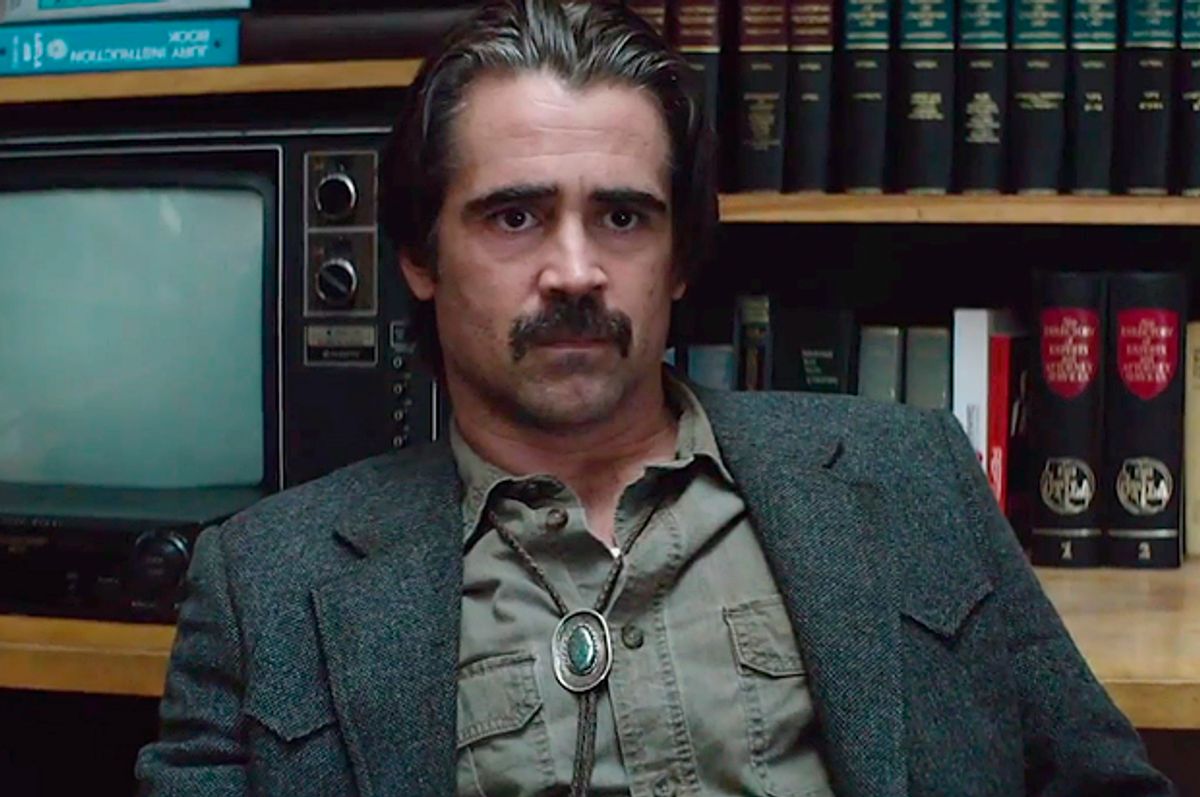 You’ve probably watched a movie trailer in which the entire plot, including various twists and surprises and mistaken identities, is unspooled before you’ve even bought a ticket. Sometimes, it can seem like you’ve already watched the whole movie, just sped up and with all the boring stuff – as well as the nudity and cursing usually excised from trailers – left out. Almost half of Americans say that trailers give away too much, and almost a fifth say plot-heavy trailers have discouraged then from seeing a film.

It’s the culture of over-sharing brought to the Cineplex.

The folks behind “True Detective,” HBO's cinematic television series about to launch its second season on June 21, seem to have taken the complete opposite approach. They could orient us a bit since they'll give us a new cast, a new location, a new backstory and a new plot. But, apparently not.

Between a trailer dropped in April, and two more (at 30 seconds each!) released this weekend, we’re still completely confused. We get lots of freeway shots, some elaborate maps, and numerous images of earnest men smoking and brooding, but we still have no idea what’s going on. There’s almost no dialogue, and it’s not clear where or when any of this is taking place or what the central crime is. Here's one of the new teasers:

At the very least, the show’s creators are playing their cards very close to their collective vest.

It’s all so vague, for instance, that Gawker is placing odds on which character is this season’s true detective. So far the Colin Farrell character is winning:

A recurring image in these trailers shows Colin Farrell in a mustache wearing a bolo tie sitting at one end of a table in some sort of office or library, looking like he’s being interrogated or interviewed. The whole thing, mustache especially, feels like a callback to Rust Cohle’s famous Lone Star-fueled rap session in the first season. And just like Rust, Farrell’s facial hair aesthetic seems to morph over time—in at least one scene, he’s not sporting a ‘stache at all. Is HBO setting him up as successor to the truest detective television has ever seen? Time will tell.

Taylor Kitsch also doesn’t clearly show up in any of this, unless he is disguised as a woman we see from behind. And what is Rachel McAdams’s deal? In fact, it's hard to get much sense of the character's relationships to each other at all. Partners? Antagonists? Total strangers?

We know there will be people who are pissed about this, who feel cheated, who need to know now what the hell is going on.

But here’s the thing: The first season of “True Detective” is one of the best things ever on television. This was partly because of great acting, an evocative Louisiana setting, strong writing, and a wacked-out Matthew McConaughey character who drew out the existential quality that has been part of the noir tradition since Hammett and Chandler. But it’s also because we spent much of the show actually trying to figure out what was going on. Was McConaughey’s Rust Cohle crazy? What on earth was he talking about? Who were the good guys and the bad guys? Would someone go to jail at the end?

At the same time, it was a show of only eight episodes. Like the lean, mean novels of Richard Stark (one of which was the inspiration for “Point Blank”) it knew when to say goodbye and to leave us wanting more. We’re not sure the McConaughey-Woody Harrelson season would have worked as well as it did if it had been as eagerly awaited and prematurely dissected as the second season is.

We have all kinds of doubts about season two, among them whether Vince Vaughn can pull his weight and whether the show can capture California the way it did the bayou. (Farrell may be a volatile guy, but he can be a brilliant actor; it’s hard not to have high hopes for him here.) That first season might just have been a brilliant, lightning-in-a-bottle fluke.

But in a culture where every new artifact comes complete with a highly choreographed rollout, when book reviews tell us what happens near the end of the novel, where the web buzzes with glib instant analysis, we’re willing to remain a bit confused and off-balance for a bit longer. It worked for "Mad Men," when every countdown-to-the-finale episode was promoted with an infuriating oblique glance at the events to come, with the promos teasing the mood more than the plot. And this approach suits the weird ambiguity that “True Detective” seems to be about.

And in any case: If this new season is half as good as the first one, all will be forgiven.