George W. Bush haunts the GOP -- again: 2016 hopefuls will have to reckon with his torture legacy 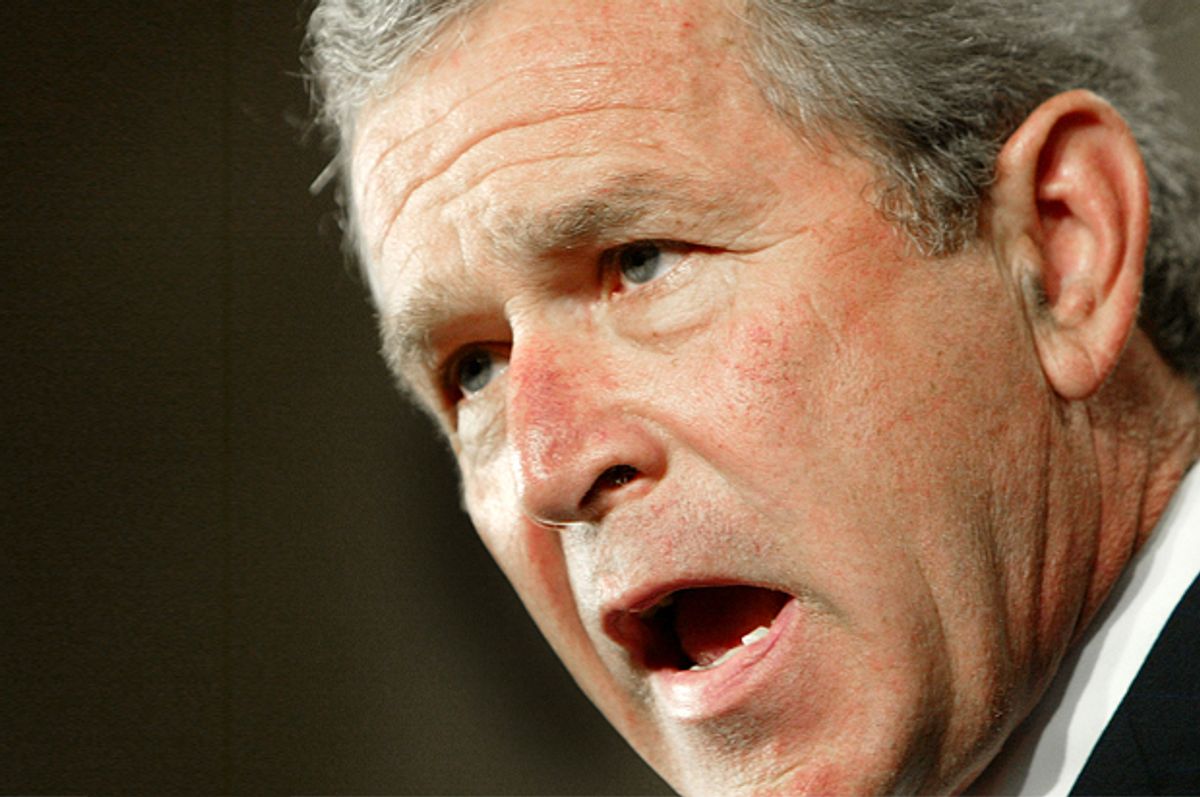 Torture may emerge as an unlikely issue in the 2016 campaign and if that happens, it promises to be a nightmare for GOP candidates.

A group of senators led by California's Dianne Feinstein have introduced new legislation that hopes to make U.S. sanctioned torture even more illegal (torture is already illegal in the United States) by closing the existing loopholes that allowed the U.S. to circumvent such prohibitions in the past and codifying into law President Obama's 2009 executive order prohibiting the practice of torture by any government body, including the CIA.

It was a damming Senate Intelligence Committee report on the CIA's George W. Bush-era torture tactics released late last year that detailed the gruesome practices used on detainees, like a method referred to as "rectal feeding" whereby medical professionals under CIA directive anally injected liquified food into fasting prisoners, among countless other abuses. The report, which Senate Republicans refused to aid in, was roundly dismissed by conservatives who either championed the use of torture techniques like waterboarding or decried the report's release as an attempt to aid U.S. enemies. The usual dribble used to quash any criticism of America's prosecution of the so-called "war on terror." Senator John Cornyn (R-TX) blamed "the political calculations of some" for making "the American people and our allies across the globe ... less safe today than they were before” and handing "terror groups like ISIL another recruiting tool."

When the original Senate report was released in December of 2014, 2016 hopeful Sen. Marco Rubio called it "reckless irresponsible" in a press release and tweeted his disapproval:

Those who served us in aftermath of 9/11 deserve our thanks not one sided partisan Senate report that now places American lives in danger.

Both Senators Rand Paul (R-KY) and Ted Cruz (R-TX) have come out against specific torture practices like waterboading but neither have indicated their support for the proposed legislation.

Now, some in the Senate hope to bring debate back to the issue and this may present a problem for the GOP's 2016 roster. Hillary Clinton has already come out forcefully against the use of torture, expressly calling for legislation further outlawing the practice and leaving the "debate" to be had by just one side. As The Huffington Post points out, Republican senators like John McCain (AZ) and Susan Collins (ME) have cosponsored the legislation noting that "it has long been rumored that Feinstein was working to bring McCain, a staunch critic of the use of torture, on board for any legislative proposals. His support very likely will be the only hope the amendment has of getting through a GOP-majority Congress."

Coupled with a new report from The New York Times today detailing how new U.S. Attorney General, Loretta Lynch, whose confirmation vote was held up by congressional Republicans (partially in spite of her predecessor's success in the face of GOP opposition) has already overseen the expansion of legal rationales to try non-U.S. citizens accused of terrorism in U.S. courts (as well as corrupt FIFA officials), the GOP looks to be in a bind over the issue of torture ahead of the 2016 election. What will the Republican 2016 candidates do with a tough on terrorism AG with a track record of successful prosecutions of international terrorists and their party's former presidential nominee beating the anti-torture drum?

Although a slight majority of Americans think the CIA torture's was justified, the last thing Jeb Bush wants during the campaign is another debate on some of the worst aspects of his brother's legacy, especially after Jeb's complete mishandling of questions on wether his brother was right to invade Iraq in the aftermath of 9/11.

So far, the 2016 Republican's strategy has been to stay mum but with some prominent Senate Republicans joining onto this legislation, their days of avoiding the topic may be numbered.