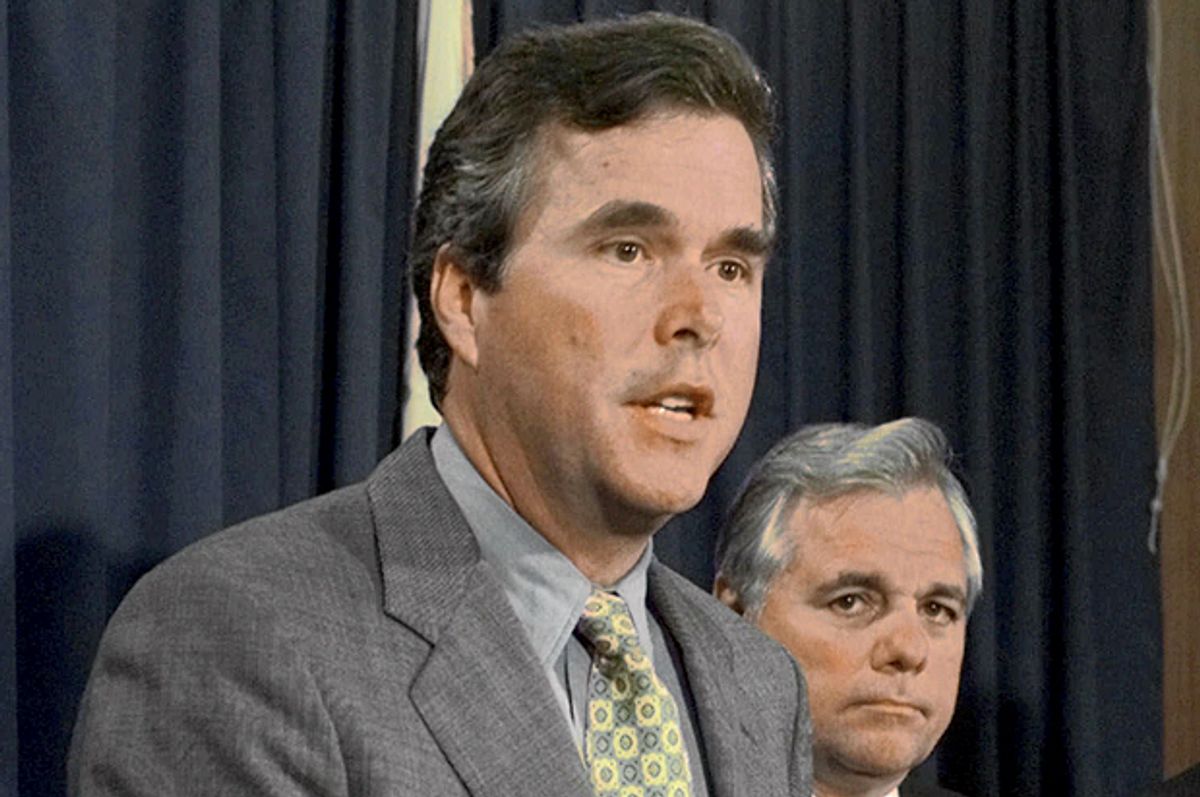 Jeb Bush was supposed to be the smart Bush brother, the one who would become Florida governor in 1994 and follow his father to the White House, hopefully by 2000. As we all know, it didn’t happen that way; Jeb lost his 1994 race in a squeaker, while his brother George won over in Texas, and by all accounts the lesser Bush became president six years later.

What did Jeb do while waiting for another shot at the Florida governorship? Well, this week we’ve all remembered that he wrote a forgettable, terrible book, “Profiles in Character.” It starts with a cliché title obviously cadged from John F. Kennedy’s famous “Profiles in Courage,” and it pays off with a culture-war broadside perfect for 1996. Except the fire and brimstone is smothered by a wet blanket of horrific writing.

It’s just more evidence that pundits who’ve long claimed that the wrong Bush became president – that Jeb was smarter and abler than brother George – have been wrong all along. He and co-writer Brian Zablonski delivered a book that reads like Bill Bennett’s “The Book of Virtues,” published the same year, was plagiarized by a middle-schooler whose first language wasn’t English.

Bush has to hope the book stays out of print. The guy who claims he’s ready to “lose the primary to win the general,” and stand up to his party’s rabid right-wing base, comes off as a champion culture warrior, railing against no-fault divorce, single mothers, absent fathers, teen pregnancy and abortion. But his special horror is reserved for the sexual activities of the ladies.

The Huffington Post revealed Monday that in a chapter titled "The Restoration of Shame," Bush advocated a return to the public shaming of unwed mothers and adulteresses. “Infamous shotgun weddings and Nathaniel Hawthorne’s Scarlet Letter are reminders that public condemnation of irresponsible sexual behavior has strong historical roots,” Bush wrote.

In another chapter Salon obtained, "Our Little Platoons" (from Edmund Burke's venerated "little platoons" of family and civic society), he tells us that women who shack-up without marriage are more likely to cheat than married women (sadly, he can’t find statistics for shacked-up men). And girls growing up without fathers? They turn out, well, kind of fast. “For young girls, there is a correlate effect of fatherlessness that can be measured by sexual activity and the rate of out of wedlock childbearing.” He goes on to cite one study of white families by a University of Wisconsin sociologist as his evidence.

Of course, Bush says fatherlessness is bad for everyone, not just girls. “The effect fatherlessness has on both boys and girls, not to mention the rest of society, is daunting,” he tells us, with more of that sharp writing. “Fatherlessness is a good indicator of which persons are likely to contribute to…social ills.”

Worse than the scourge of single parent families is the horror of abortion. “Responsible parenting begins with the pregnancy,” starts a section that denounces abortion. The “growth” of abortion, Bush writes, “is a reflection of our attitudes toward personal responsibility.” He does allow that abortion can be a tough choice for a woman. “Abortion is not a right practiced with pride and enthusiasm, but with reverence and humility,” he writes -- very, very weirdly.

But his bottom line: “Men and women of character should not be detracted from reaching a consensus that reducing the number of abortions is a worthy objective.” Detracted is probably not the word he was looking for. Imagine if he didn’t have a co-author.

It should be noted that Bush didn’t merely want to publicly shame loose women: He also advised it for welfare recipients and juvenile offenders. “For many, it is more shameful to work than to take public assistance -- that is how backward shame has become!” he wrote in that same chapter, and added that the treatment of juvenile offenders "seems to be lacking in humiliation." He co-signs the notion of “dressing these juveniles in frilly pink jumpsuits and making them sweep the streets of their own neighborhoods!” (Jeb uses lots of exclamation points when he’s talking about shame! Shame is exciting!)

The writing is distinguished not just by its awfulness, but by a pervasive faux-bravado, as Bush shares brave truths that do not actually require bravery to share. “It has come time for us to face the fact that the two-parent family is good for children.” As though that was a controversial claim in 1996, or anytime. “Historically, fathers have always had a unique role in society” is another typical example of his big, brave, ground-breaking thinking.

There’s so much wrong with “Profiles in Character,” but many have noted perhaps the worst hypocrisy of all: While Bush talks in the book about wanting to encourage adoption, as an alternative to abortion, as governor he backed one of the cruelest laws ever: Florida’s 2001 “Scarlet Letter” law that required unmarried women putting a child up for adoption to publish their names, ages and details of their sexual histories (including the names of their partners) in a newspaper.

The legislation was designed to promote fathers’ rights – remember, “historically, fathers have always had a unique role in society”! -- but it had the very intended consequence of publicly shaming unwed mothers. For patriarchal culture warriors, that’s a win-win. The law was challenged by lawyers for a 14-year-old rape victim and struck down as unconstitutional.

Coincidentally, the man who wants to succeed Barack Obama wrote his “Profiles in Character” just six months after the lyrical memoir “Dreams From My Father” was released.  Publishers rushed to get the rights to re-release “Dreams” once Obama surged into the Senate in 2004; oddly, no one seems ready to republish Bush’s “Profiles.” And that’s just more good luck for the privileged guy who’s trying, belatedly, to fulfill dreams from his own father, but who looks ever more unlikely to do so.