This is America's injustice system at work: The Washington elite's defense of David Petraeus will make you sick

Why did the ex-general get such a light sentence for leaking state secrets? His pals' letters may offer a hint 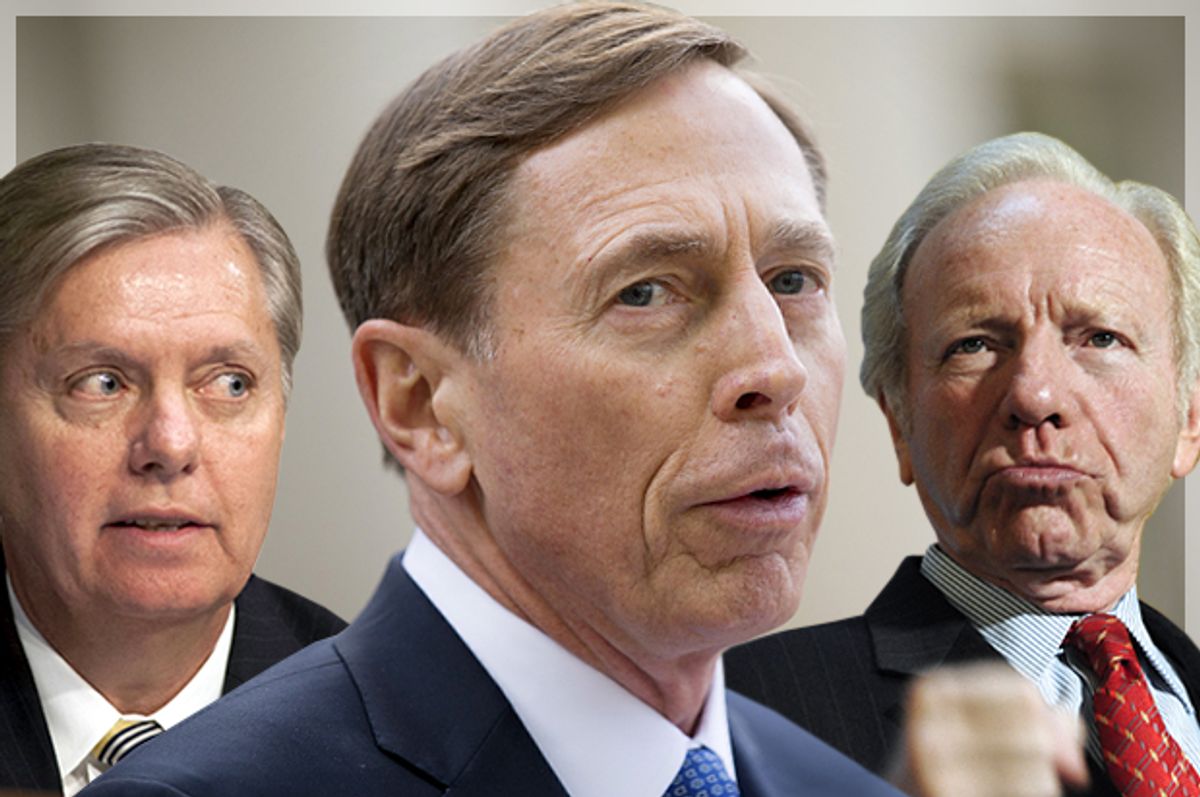 Reports of the United States’s terminal decline as a global superpower have likely been greatly exaggerated. But even if Americans need not yet worry about Germanic tribes or Mongol hordes storming the capital and toppling the Washington Monument, the country is still in a period of severe decadence. Contrary to what the bulbous heads at Fox News may say, though, the proof is not found on the cover of Vanity Fair or in Caitlyn Jenner’s cleavage. There is a much better — but admittedly less exciting — place to look.

Well, there are hundreds of better places to look, actually, since corruption and excess have nothing to do with Ms. Jenner. But one of the newer and most revelatory examples can be found at the Intercept, where a collection of letters to a judge from many of the most powerful people in Washington (and, indeed, the world) are now available to the public. Taken altogether, the letters offer a glimpse of what it looks like when the American ruling class decides to circle the wagons for one of their own. For anyone who takes America’s claim to believe in justice and equality in seriousness, reading the letters is a deeply unpleasant experience.

If you haven’t already guessed, the letters I’m talking about were written for retired general and CIA director David Petraeus, who recently found himself in a bit of legal trouble for spilling government secrets. As anyone familiar with the names Chelsea Manning or Edward Snowden knows, this is supposed to be the kind of transgression that the U.S. government — and the national security state elites and enablers in Washington — takes very, very seriously. So Petraeus pleaded guilty, put his future in the hands of Judge David Keesler, and hoped his former prestige and his enduring connections would take care of the rest.

Spoiler alert for those who haven’t been following the topsy-turvy world of Mr. Petraeus: His plan worked. The judge gave him 2 years probation, a $100,000 fine, and noted his “remarkable public service.” For a guy with Petraeus's kind of money and Petraeus proximity to the levers of power, this amounted to a slap on the wrist. It was a good day for the man whose masterplan, the “surge,” helped George W. Bush delay the inevitable in Iraq until the next guy was president. And it was a good day for his many friends, and those who’d agree that a little lawbreaking here and there shouldn’t weigh down a “living legend.”

So who were these buddies of the onetime general and rumored presidential aspirant? They weren’t longtime advocates of a more lenient criminal justice system, or less restrictive laws against sharing classified information, as one might suspect. On the contrary, among their ranks were some of the sternest, strictest and steeliest defenders of order, authority and national security currently operating in American politics. There was former Sen. Joe Lieberman, a guy who once called Manning a “traitor” and described her actions as “a grotesque abuse of the Internet.” For Petraeus, however — who Lieberman’s letter describes as “a man of strength, courage, grace, honor, intellect and civility” — he would make an exception.

Lieberman was joined by current senator, presidential candidate and longtime non-veteran Lindsey Graham, who writes that the “extraordinary” Petraeus has “quietly suffered in ways that most people could not appreciate.” Indeed, in countless testimonies, the idea pops up that Petraeus should not be punished too harshly because his infidelity, which was intimately related to his crime, was such a public embarrassment. “It is no accident that General Petraeus has had a soaring career,” writes David Bradley, the owner of Atlantic Media, which publishes National Journal and the Atlantic. “Some measure of justice may take into account how high the flight and how far the fall,” he continues. But, in Bradley’s opinion, “a full measure of justice has been meted out.”

Over and over again, the authors of these missives use the same argument to persuade the judge to go easy on their friend. Petraeus, they say, is special. He’s smart, hardworking, civil, patriotic. He’s different. Yes, he may have committed the kind of crime that, if discovered, would be the effective conclusion of most Americans’ productive lives. But Petraeus isn’t some schlub on the street or some no-good peacenik activist. No, Petraeus is valuable; he has too much left to give.

“The importance of this character, in the circumstances in which we find ourselves," writes Tony Blair in his letter, "cannot be overstated." Evidently, Judge Keesler was in a similar frame of mind when he decided on Petraeus's sentence. For while America may purport to be a nation of laws, where what matters isn't who you are but rather what you did, it never hurts to get a little help from your friends.