Doing slow time in Litchfield: Diving back into "Orange Is the New Black"’s deep ensemble riches 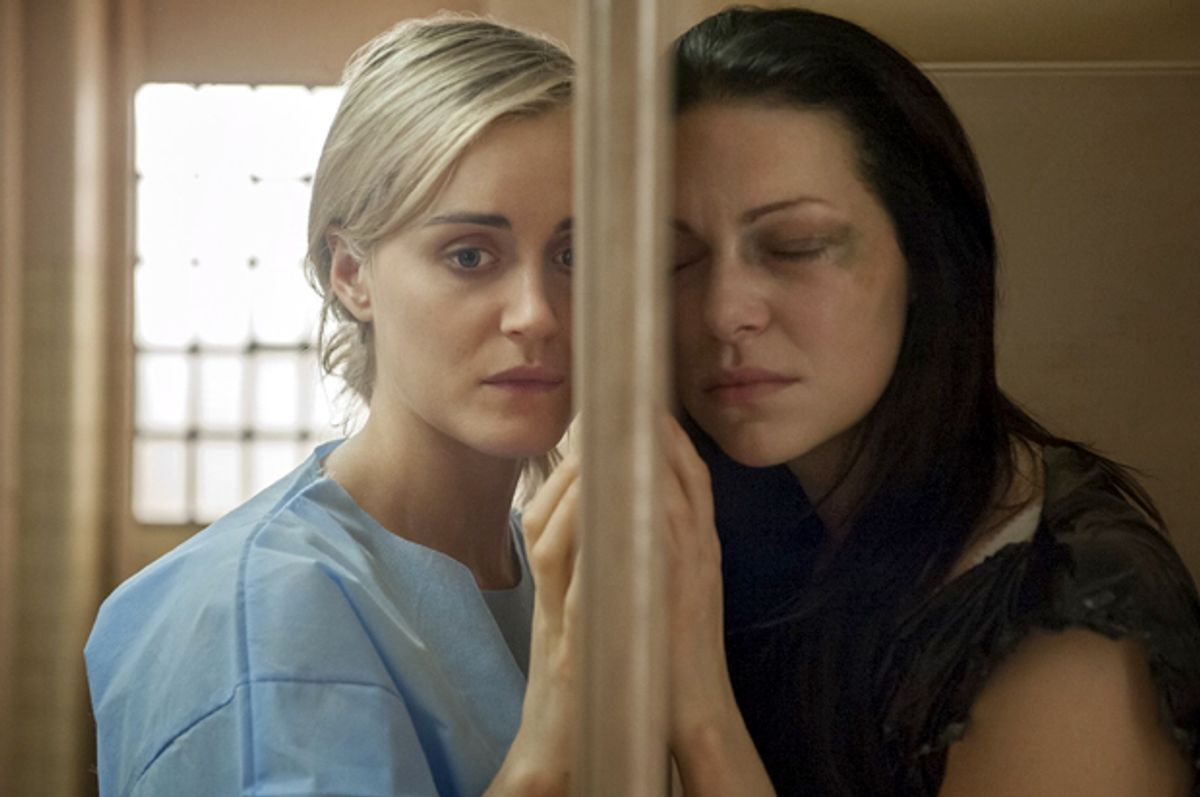 In the first episode of the third season of “Orange Is The New Black” (returning to Netflix tomorrow), the inmates of Litchfield Penitentiary celebrate Mother’s Day. Even the inmates that aren’t mothers join in somehow—by volunteering to supervise kids hitting the piñata, handing out toilet paper in front of the port-o-potties, or, like Big Boo (Lea DeLaria), wearing a makeshift clown costume that is more creepy than fun. Everyone takes their responsibilities very seriously, even within the anarchic confines of federal prison: There’s a certain precious fragility to a day spent outdoors with your kids, a whiff of normalcy that could be easily scared away. Or as drug addict Nicky (Natasha Lyonne) says to former drug dealer Boo, about her costume: “We have got to get these pom-poms spaced more evenly.”

The tenor of the day reads more like kids preparing for their parents’ arrival than vice-versa—the banners are hand-painted and the supplies are meager; the blindfold that Soso (Kimiko Glenn) puts around the head of one little boy is made from a rubber band and a maxi pad. A few inmates are stunned to discover some kids aren’t visiting; a few others learn that this is their kids’ last visit for a while. A few characters take the opportunity to flirt or reminisce.

In the midst of all this, someone goes missing. It’s a big place, and she’s a small person, so it’s entirely possible she’s just been overlooked, or maybe at another station, or maybe playing a game of her own. But the correctional officers start to panic, and after a few minutes, they order a lockdown of the premises. The inmates, in their khaki scrub-like uniforms, lay facedown on the floor with weary, practiced rhythm. The kids and other family members don’t know what to do, and their faces blank into various expressions of terror and confusion. It’s a moment of sad incongruity; one little girl starts crying and crouches on the ground in fetal position.  The missing person is found very quickly, but the fragile state of normalcy is more permanently lost. The thudding reality of the day has reared its ugly head once again: This is prison; this isn’t normal; and no one here is untouched by the pain of that.

Welcome back to the commingled feelings of sweetness and sadness that make up “Orange Is The New Black,” a show that like a jewel box contains characters, settings, and moments of rich detail and terrible beauty. The show, from showrunner Jenji Kohan, is easily Netflix’s best—more of its flagship, really, than “House Of Cards,” despite the latter show’s Hollywood pedigree. Not only is “Orange Is The New Black” a good show—it’s particularly well-suited to Netflix, which releases its shows all at once to allow the viewer to binge-watch at their own pace. “Orange Is The New Black” is more mood than story, more atmosphere than plot; watching it for hours on end is like slipping back into a well-worn and familiar armchair. Much of the first half of the season is reminding you, the viewer, about what it feels like to live in this place; drawing you back into the heartbreak, humor, and hijinks that make up prison life at Litchfield, re-introducing you to the life you likely left behind last summer.

The show is not without flaw, but one of the things that is so nice about “Orange Is The New Black” is how much the flaws work in the show’s favor. That jewel-box quality of finding new treasures and looking to discover more amongst the show’s huge ensemble means that “Orange Is The New Black” unfolds more like a picture book than a novel. Every season, I find myself a little frustrated at how little actual storytelling takes place in the series—the show moves at such a glacial pace that Daya (Dascha Polanco) is still pregnant—but by the end of the season, I’m too enraptured by one particular gem or another to be bothered. It’s details at the expense of plot, but the richness of those details is hard to contest. In the first six episodes of this season, “Orange Is The New Black” reveals snapshots of backstory for Big Boo, Nicky, “Flaca” Gonzalez (Jackie Cruz), and even two of the male COs, Healy (Michael Hamey) and Bennett (Matt McGorry)—characters who have for the most part been so incorporated into the series that finding out more about them feels like entirely earned and unforced exposition.

The experience of “Orange Is The New Black” becomes very subjective, as a result: The jewels you care for will be fascinating; the ones you’re not interested in are little more than a diversion. (My prize jewel, this season, was in episode six.) But this season has done a much better job at focusing on the characters and stories that really pop, and sidelining or writing out the relationships that were boring. Last year, we got a lot of Larry (Jason Biggs) and very little Alex (Laura Prepon); this season, that’s flipped, as Piper (Taylor Schilling) has broken up with Larry and is getting involved, again, with Alex. Piper herself, the technical protagonist of the show, has been sidelined, too, in favor of telling more stories—and quite pointedly focusing on ensemble and atmosphere instead of a single character’s narrative journey.

It does raise the question, for interested viewers, of what “Orange Is The New Black” is going to do when Daya finally has her baby, when Piper gets out of prison after her relatively short sentence, when the lives of these people move forward a tiny bit more than just weeks at a time. Jewel boxes are pretty, but they’re inert, and extended backstory isn’t a narrative. Fortunately, what “Orange Is The New Black” has proven is that having a strong narrative arc doesn’t really matter, if you can create a world that audiences want to hang out in—and in some ways, the looseness of the story, the lack of purpose, and the very slow passage of time are themselves characteristics of prison life, where you just have to stay in a specific place for a specific amount of time, regardless of whether or not you get anything out of it.

There is a lot to get out of “Orange Is The New Black.” As Todd VanDerWerff observed, the show actively practices empathy, constantly, and brings the audience into that exercise. And the show has permanently altered what it means to tell stories about women in prison in this culture, taking the stereotype of pulpy prison sex and turning it into multifaceted character drama—characters that make up by almost any measure the most diverse cast on television. Progress, in a narrative arc, is a convenient fiction; the problem is that so many of us are stuck instead in endless loops and eddies of our own making. That aimlessness is in some ways the beauty of the show: No one really changes, especially on this island of misfit toys where everyone is at least a little culpable for their failures. But the characters do get a little better at living together, and that’s ultimately what keeps the show, its characters, and its audience going. We’re drawn into the intimacy of this world, and are asked to serve just a little bit of time.