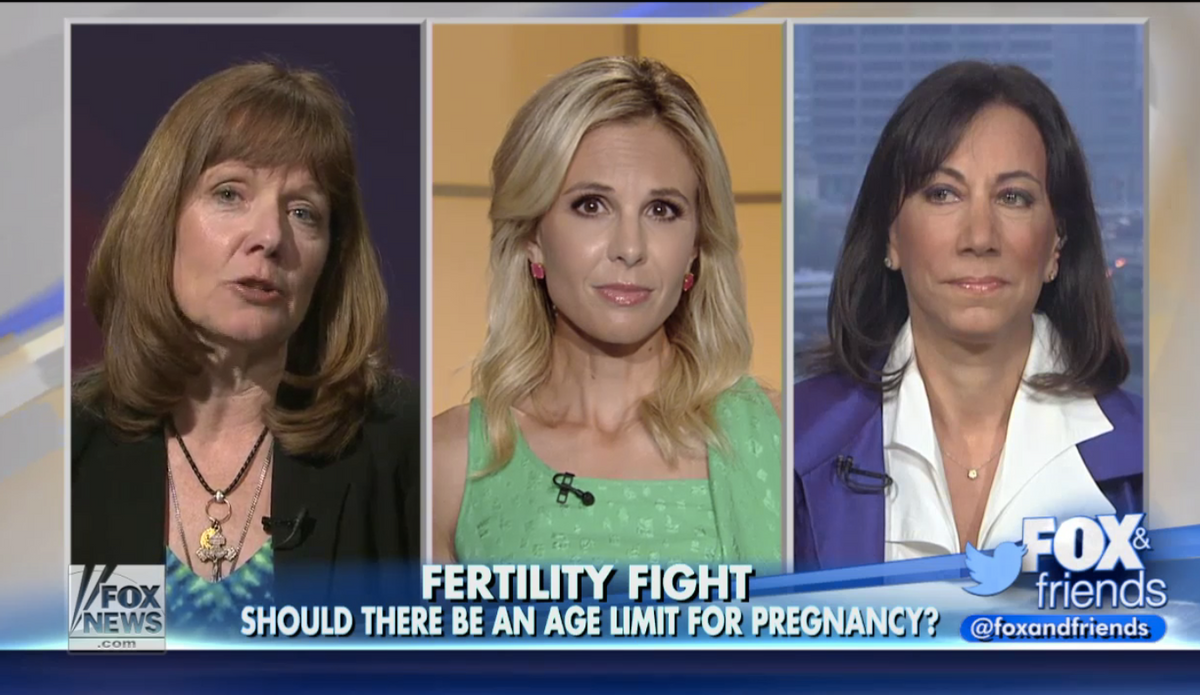 "Fox & Friends" hosted what could have been an intriguing debate about fertility and the changing social mores around assisted reproductive technology on Friday, but then the conversation just got...weird. Actually, there were two conversations going on, about completely different things.

During a segment titled "How Old Is Too Old To Bear Children?," Fox News host Elisabeth Hasselbeck brought on Patti Armstrong, a contributor to the blog Catholic Mom and mother of eight, and Dr. Lauren Streicher, a professor of obstetrics and gynecology at Northwestern University, to discuss whether there should be a "social limit" on when a woman should get pregnant. Clearly, Armstrong and Streicher were meant to butt heads -- but instead the two guests essentially agreed that menopause is the endpoint of a woman's fertility.

"I think there is a limit -- it's called menopause," Armstrong said. "So, that's your limit right there."

"Doctor, if someone comes to you after the age of 40 and says, 'I'm pregnant and I'm about to have a baby,' would you recommend they not go forward with that pregnancy simply because of their age?" Hasselbeck asked Streicher.

"Not really," Streicher said. "Patti's absolutely correct in that menopause is biologically when we're meant to no longer have children, and, in fact, biologically we're meant to have children in our 20s and 30s. But what's happened, of course -- with new technology, donor eggs, in vitro fertilization -- is we've pushed that envelope, and now we do have women who are in their 40s or even 50s or 60s, who come in and say, 'I want to have a baby.'"

Streicher went on to urge caution about the prospect of older women receiving assisted reproductive technology due to health risks, which both Armstrong and Hasselbeck essentially went on to ignore. Hasselbeck then directed a question about the health benefits of having a baby after 40 to Armstrong, who is not a medical professional, instead of Streicher, who is, and pivoted to a conversation that concluded with the assertion that women who get pregnant "naturally" at any age have no reason to terminate.

"I'm not talking about doing artificial things," Armstrong said. "But if your body is healthy enough to have children, I cannot see any reason why you shouldn't."

Watch the bizarre "debate" below: