"I don't know if he likes immigrants": The budding smear campaign against Bernie Sanders

Bernie Sanders focuses on economic inequality. This does not mean that he doesn't care about anything else 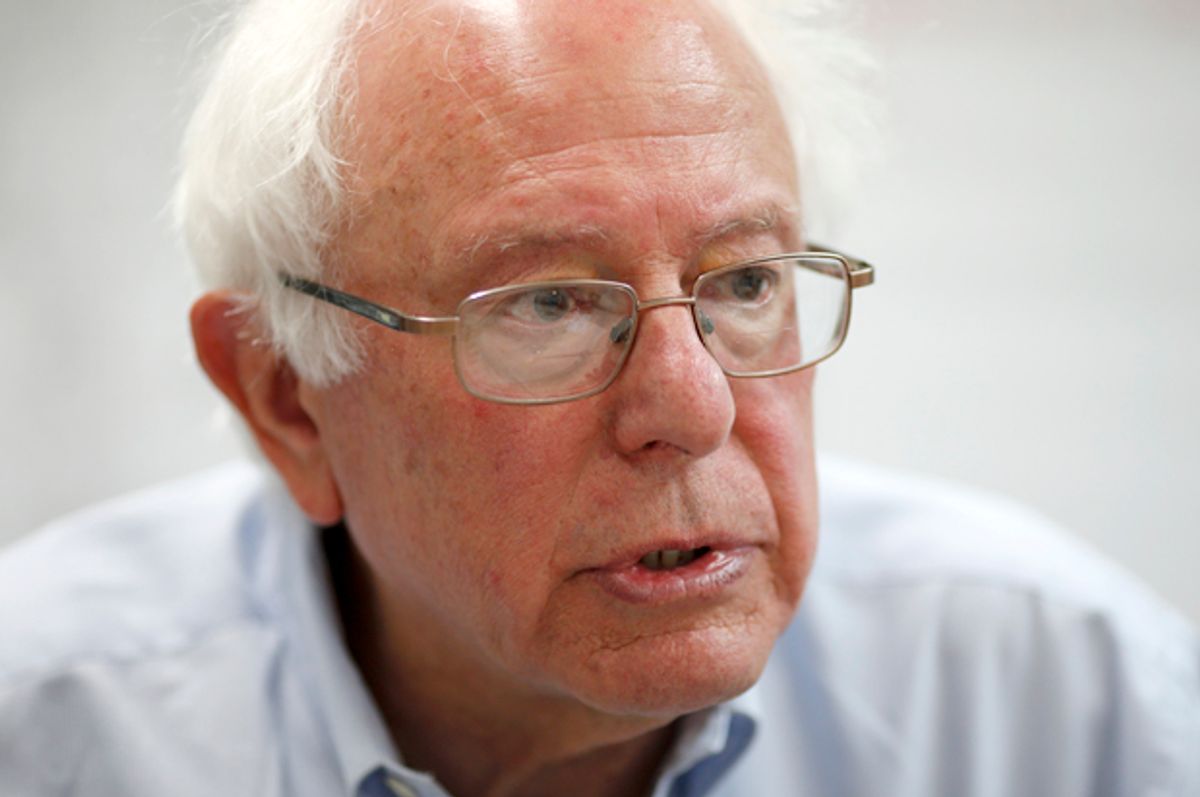 Bernie Sanders is trying to run a presidential campaign with a laser-like focus on the structural inequality of the American economy and the direct means through which that can be changed. It's difficult to get him off-message, away from railing about the MILLIONAYUHS AND BILLIONAYUHS.

Political pundits typically treat disciplined messaging as a sign of a strong candidate. In Sanders' case, though, his devotion to structural economic disparities has sparked some criticism about the narrowness of his appeal. He is a senator from Vermont, a lily-white state with very few of the racial minorities who make up the base of new national Democratic coalition. As such he may have a "blind spot" about issues of great importance to many African-Americans, like police abuse and mass incarceration, or Hispanics, like the plight of undocumented immigrants and the way immigration policies tear families apart.

The "blind spot" is one of messaging, however. There is nothing in Bernie Sanders' record to indicate that he does not care about these issues -- quite the opposite, in fact. If he omits them from his stump speech, it's not because he's trying to hide some sort of distaste for central demographic groups within the Democratic party. It's reasonable to ask Sanders to speak up more on these issues, or on foreign policy, or on anything else that might detour from his central talking points.

Reasonable criticisms of Sanders' pitch have the potential to detour themselves, however, into smear territory. Consider the following comments from Illinois Rep. Luis Gutierrez, a Democratic point man on immigration issues:

Speaking with Larry King on his show, "PoliticKING," Rep. Luis Gutierrez (D-Ill.) gave other Democratic presidential contenders like Hillary Clinton and Martin O'Malley passing grades on immigration. But Sanders, who announced his run for the White House last month, failed to make the cut.

"I don’t know if he likes immigrants, because he doesn't seem to talk about immigrants. But sooner or later he’ll tell us. I hope he likes immigrants. I haven’t heard him say anything. He’s been kind of quiet and silent. So I hope that when he sees this program he sees that there’s a lot of people waiting to hear from him," said Gutierrez, a member of the House Judiciary Committee who advocates on behalf of comprehensive immigration reform.

"I don't know if he likes immigrants." What we have right here is a smear. Sanders voted for comprehensive immigration reform in 2013. He's voted for the DREAM Act. He was a strong supporter of President Obama's executive actions on immigration and has been plenty vocal about his desire for pathway to citizenship for millions of undocumented immigrants. The positions are there, and Rep. Gutierrez, as a member of Congress who serves as a lead on these issues, should have enough evidence to determine that Bernie Sanders "likes immigrants."

Sanders has also, however, been critical of the aspects of comprehensive immigration reform that are less than ideal for progressive groups and labor unions: expansions of certain guest worker programs where corporations bring in and exploit workers for jobs for which there's already ample demand. He's called on the Justice Department to investigate rampant abuses of the H1-B visa program, something that's very real and should be a progressive priority.

Rep. Gutierrez is a supporter of Hillary Clinton's campaign for president. He's known to have a sharp tongue, and he's plenty capable of making over-the-line comments like these without any outside urging. And yet I can't help but wonder. During her nascent campaign, Hillary Clinton has been strong on issues of criminal justice reform, immigration reform, and voting rights, but has thus far avoided central questions about her economic platform and what strategies she would pursue to bring about a more just distribution of wealth. It would be a real shame if she continued to avoid these questions, because they're difficult, and relied instead on her loyalists to spread a whisper campaign about how Bernie Sanders does not "like" immigrants or African-Americans.