America is still a segregationist state: The brutal lessons of McKinney

McKinney brought to mind the killing of Trayvon Martin, another black teenager deemed to be not where he belonged 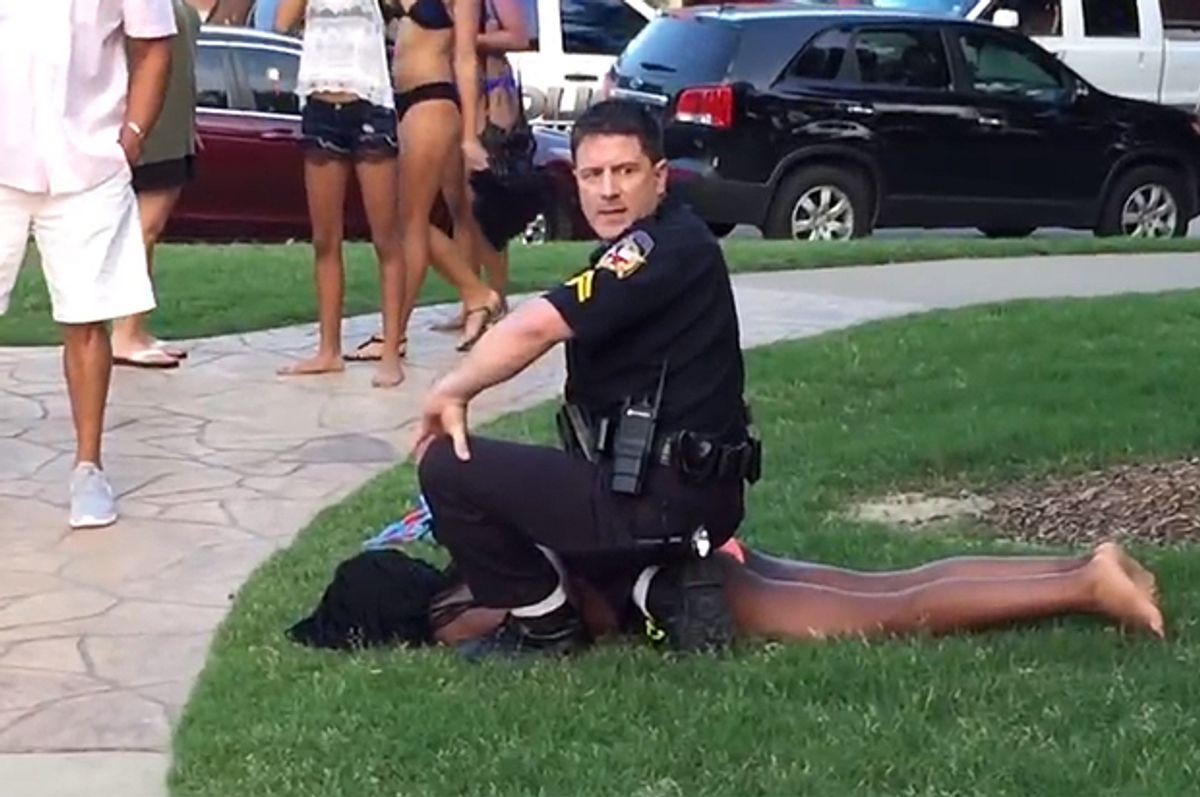 A lot has been written about the event at a public swimming pool, wherein racism and police brutality were in graphic display. One telling element of the story is that what sparked the violence that ended up with a heavy-set fully armed white male police officer throwing a 15-year-old black girl clad only in a bikini on the ground and holding her down with his knees on her back were the actions and comments of white residents who were outraged that black teenagers were (rightfully) using the community recreational center.

According to an article in The Grio:

Tatiana Rose, who hosted the community pool party with her siblings, says that the weekend confrontation was sparked by angry white neighbors. Rose, who is 19, took to YouTube to tell her side of the story.

Rose says the cookout at the Craig Ranch housing community was a public event she and her sisters held for their young friends from the neighborhood. Unfortunately, a group of white neighbors from Craig Ranch began cursing at the party attendees, telling them to “return to their Section 8 housing” and hurling racial slurs at the children.

This remarkable quote points exactly to the fact that we are still living in a world of de facto segregation, and the “fact” of segregation is enforced not just by the police, but also by members of “the public.”  In these people’s minds, the only place for blacks is in neatly segregated public housing, not in actual public space.

When I think of this fact, and the fact that in McKinney the police officer was clearly acting not only unprofessionally but also illegally, that he had stepped outside his role as a police officer and into that of a vigilante, I could not help thinking of the killing of Trayvon Martin, another black teenager who was deemed by his assassin to be not where he belonged.

This deadly combination of self-deputized enforcers of the public good along with renegade police and security personnel holding the ground against young blacks who are not where they are supposed to be is found as well in one of the worst race riots in American history, which started on a beach in Chicago in 1919 and resulted in 38 dead, 500 injured and 6,000 National Guard troops called out in what became known as Chicago’s “Red Summer.” As the Chicago Tribune tells:

They were separated by a line unseen and a law unwritten: The 29th Street beach was for whites, the 25th Street beach for blacks. An invisible boundary stretched from the sand into Lake Michigan, parting the races like Moses' staff parted the Red Sea. On this stifling hot summer Sunday, Eugene Williams, a black teenager, drifted south of that line while swimming with friends. Whites picked up rocks and let fly. Some accounts say Williams was hit on the head and went under. Others say he became tired and was too afraid to come ashore. Either way, he drowned, touching off the deadliest episode of racial violence in Chicago history.

Besides these two cases, I also thought of what happened at Howard Beach in 1986, where, as the New York Times notes in a 2011 retrospective:

The events in Howard Beach began when Mr. Griffith, a construction worker, and three black companions traveled from Brooklyn to Queens to pick up his paycheck. Their car broke down late on Dec. 19 on a desolate stretch of Cross Bay Boulevard, and three of the four began walking into Howard Beach. As they were crossing the street, they were nearly bumped by a car in which several white teenagers were riding. Racial slurs were exchanged. The teenagers, joined by other young whites, confronted the black men outside a pizza parlor, New Park Pizza, and chased them.

Timothy Grimes, who was 18, escaped unharmed. Mr. Griffith was killed by a car on the Belt Parkway. Cedric Sandiford, who was 36, was beaten with a bat and other weapons …

Jean Griffith Sandiford, the mother of Michael Griffith, 23, who was chased to his death on the Belt Parkway, has forgiven her son’s killers. But the mother-in-law of one of his attackers suggests that the case was blown out of proportion. Others argue that the assault was more about turf than race and that the three black men who ventured into the overwhelmingly white neighborhood that night were probably up to no good.

Most chillingly, and most relevant as we process what occurred in McKinney, are the fates of those who led the attack: “The three teenagers convicted of manslaughter were released from prison and are family men in their 40s. A leader of the attack, who became the key prosecution witness and dreamed of following in his father’s footsteps in law enforcement, never did become a police officer.”  Probably a good thing, too. But you see the racist mentality that is so unaware of its own contradictions.

The strain of racist thinking that explodes into indignant and hateful action against those who seem to threaten one’s idea of the sanctity of one’s space, and the confidence that the police will certainly do one’s bidding because they, too, will clearly see the sheer illegality of these black kids playing in a public space, points to just how far the “American public” is implicated in McKinney and beyond.  And not only in our actions, but also in our habits of thinking that do damage in many ways, including simply staying quiet and saying that people who protest racism are making a big deal out of nothing.

Patricia Williams has a powerful phrase that captures well, I think, the ways our cities and towns are segregated in our minds, and that racism urges many to push that vision into reality, fed by fear and paranoia over what happens when blacks and other minorities “intrude” into “white” space.  This is one major part of what she calls a “geography of mistrust,” which “confines us all, whether trapped inside carceral walls at one extreme or gated communities at the other. We are left with a segmented society that does not know itself as whole, our reflection lost in the narrowest shards of a broken mirror.”

The whites in McKinney who screamed out curses at the young blacks in their neighborhood did so because they felt an injurious breech had been made in their notion of “public” space.  That retrograde image of a purely white neighborhood is out of step with the progress we are supposed to have made when it comes to race.