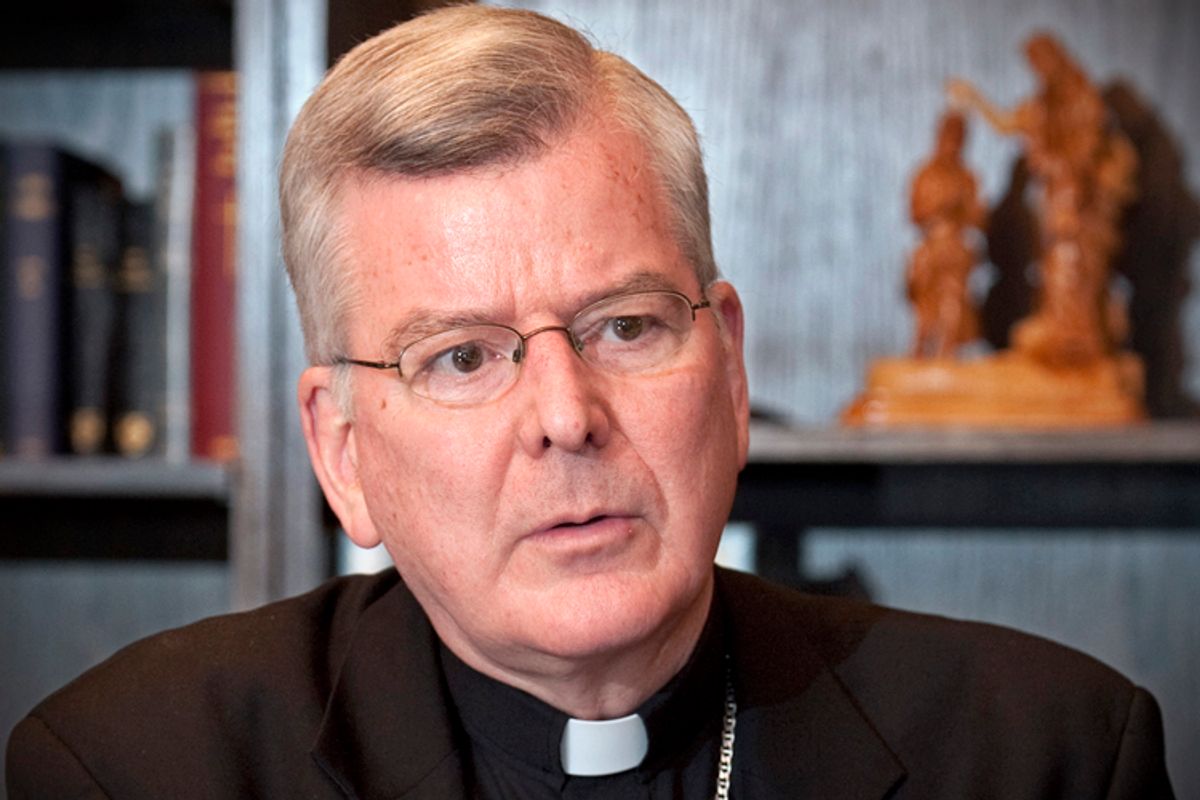 The Catholic archbishop of St. Paul and Minneapolis stepped down from his post on Monday in light of prosecutors' decision to file charges against the archdiocese, for failing to protect youth from being sexually abused by priests. John Nienstedt, along with one of his aides, Lee Piché, both announced their resignations just days after the Vatican announced the formation of a special tribunal to investigate child sex abuse cases within the church.

“My leadership has unfortunately drawn attention away from the good works of His Church and those who perform them,” Nienstedt said. “Thus my decision to step down.”

Nienstedt has become one of the most embattled figures in the Catholic church's long history of uncovered sexual abuse, and drew ire from victims' advocates, church officials and members of the criminal justice system alike when he announced last summer that he would not resign. The archbishop did note that he had been “too trusting of our internal process and not as hands-on as I could have been in matters of priest misconduct," yet retained his post.

But with prosecutors pressing on with their case against the archdiocese, which they have charged for its "role in failing to protect children and contribution to the unspeakable harm" of abuse by at least one former priest, the archbishop has relented, becoming the 17th bishop to resign over abuse cases. Via the New York Times:

On Monday, he said he would “leave with a clear conscience knowing that my team and I have put in place solid protocols to ensure the protection of minors and vulnerable adults.”

The criminal charges against the Minnesota archdiocese and accompanying civil petition, filed June 5 by the Ramsey County attorney, John J. Choi, stem from accusations by three male victims who say that from 2008 to 2010, when they were minors, a local priest, Curtis Wehmeyer, gave them alcohol and drugs before sexually assaulting them.

Mr. Wehmeyer, 50, who was dismissed as a priest in March, was sentenced to five years in a Minnesota prison in 2013 for criminal sexual conduct and possession of child pornography. He also has been charged with sex crimes in Wisconsin.

The 44-page criminal complaint states that concerns about Mr. Wehmeyer date to the 1990s, when he was in seminary and supervisors suggested that his past sexual promiscuity and alcohol abuse made him a poor candidate for the priesthood.

In light of Nienstedt's resignation, Pope Francis announced the appointment of Rev. Bernard A. Hebda, an assistant archbishop of Newark, to oversee the archdiocese as apostolic administrator. The Vatican also announced on Monday that it would begin a trial this summer in another sexual abuse case involving Jozef Wesolowski, the church's former ambassador to the Dominican Republic, who was accused of assaulting several young boys and of possessing child pornography during his tenure in Rome.

While several victims' advocates have acknowledged the Vatican's steps toward holding priests and bishops accountable for sexual abuse and negligence, some believe the church still has not gone far enough in handling the crimes. “The resignation is welcomed because it is a measure of reckoning and accountability,” Jeff Anderson, a lawyer who has represented several victims of priest abuse, told the Times. “But it’s far from enough.”