The Nice Guys™ of Litchfield: "Orange Is the New Black" dives into toxic male entitlement

In the new season we see the back stories of Caputo, Bennett and Healy, as simmering resentments come to a head 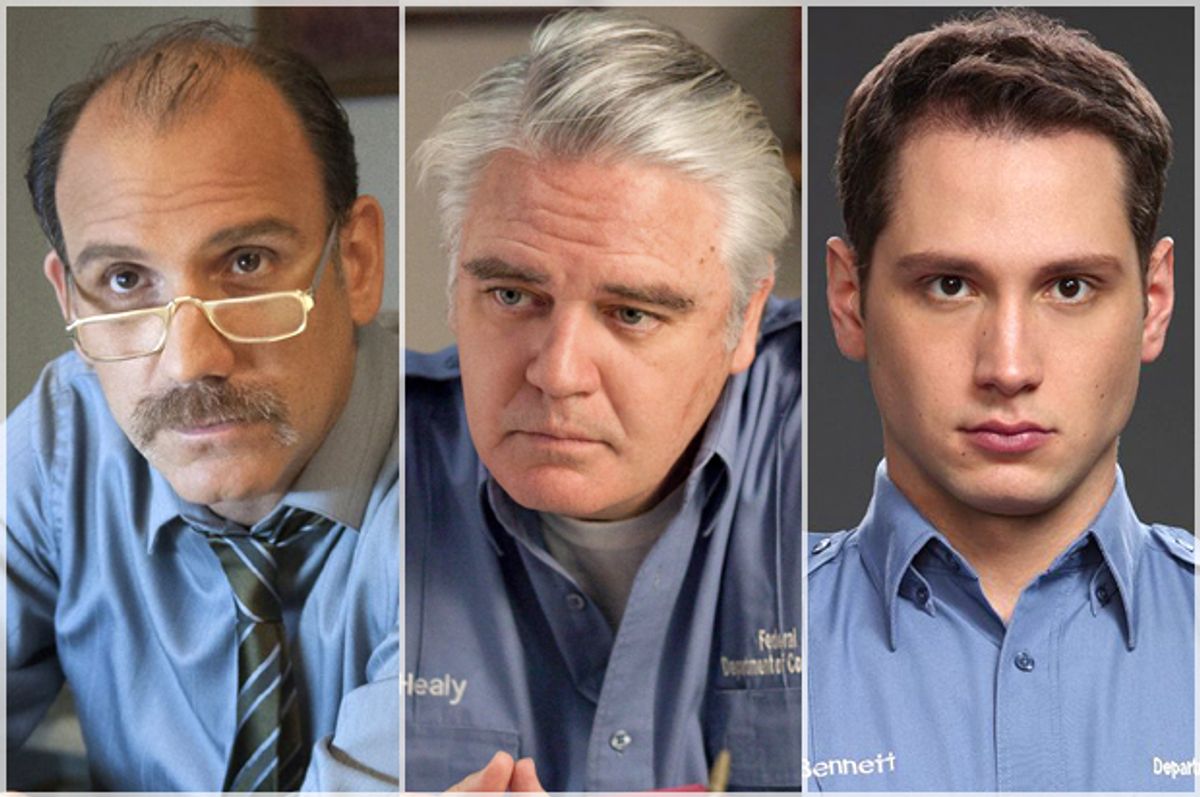 Netflix's “Orange Is The New Black” is a story about women. It has to be. It takes place inside a women’s penitentiary, where hundreds of women live stacked on top of each other like sardines. And one of the major reasons it is so consistently captivating is that it unearths new and fascinating shades of the female experience with each new episode, delving into backstory, introducing new characters, and taking already established ones into unexpected directions. In that sense, “Orange Is The New Black” is a continuously refreshing environment for what the writer Jess Zimmerman at Hazlitt called “the problem of … two locked rooms”—

... stocked arbitrarily with clothes and books and props and posters of unattainable ideals. The fixtures have changed a bit over the centuries, but inhabiting your assigned gender can mean accepting a host of assumptions and stereotypes about what qualifies as “masculine” and “feminine.”

The women of “Orange Is The New Black” are impossible to confine to room, pink or orange or otherwise, as the first two seasons have made abundantly clear. This season, which was released all at once this past Friday, adds to the already kaleidoscopic cast of characters, with the backstory of Leanne Taylor (Emma Myles), Amish meth-head who had to walk away from her close-knit family; Mei Chang (Lori Tan Chinn), loner crime-boss who just wanted to feel pretty; and Marisol “Flaca” Gonzalez (Jackie Cruz), the constant striver vulnerable to crappy schemes.

But this season, “Orange Is The New Black” has expanded that kaleidoscope to include men, too. There have always been men in the story—those few men of Litchfield that work as corrections officers and the male relatives that loom large in the lives of the female inmates. Mostly, over the past two seasons, the voice of male experience has been Jason Biggs’ Larry, Piper’s former fiancée, and it’s been quite a relief to jettison his particularly familiar brand of neurosis.

In this third season, familiar characters like Bennett (Matt McGorry), Caputo (Nick Sandow), Pornstache (Pablo Schreiber), Healy (Michael Harney), and even Cesar (Berto Colon) are given more interiority and insight than ever. This season is the first to direct “Orange Is The New Black”’s now-trademark backstory method onto its male characters—where Larry was almost always in the show as a function of Piper’s story, Bennett, Caputo, and Healy all get their own flashbacks. And in what is the most pointed effort to expand the lens of “Orange Is The New Black,” Bennett and Caputo get flashbacks that recur throughout the whole hour, effectively making both of those characters the stars of their own episodes.

Of the two, it’s Joe Caputo’s episode, “We Can Be Heroes,” that hits the hardest; Bennett’s flashback is fine, but “Bed Bugs And Beyond” exists mostly to write McGorry out of the show for now (the actor now stars in “How To Get Away With Murder”). “We Can Be Heroes” has a more profound aim. Season three of “Orange Is The New Black” depicts a much friendlier Litchfield than in seasons past, and that is because of Caputo—he inherited the position of assistant to the warden from corrupt politician Natalie Figueroa (Alysia Reiner) at the end of season two. And yet you’d be forgiven for overlooking him—Caputo has until now been an entirely overlookable character, a pencil-pusher who seems to have a sense of what should be done but can’t quite get out of his own way enough to actually do it. With his rubber-glove masturbation and his failed attempt to date fellow CO Susan, he is both tragically and comically pathetic.

“We Can Be Heroes” is an uncomfortable, uncompromising exploration of his psyche, starting with a high school wrestling match, where little Joey Caputo is facing someone well out of his league for a vague, poorly defined sense of “heroism,” juxtaposed against Caputo’s current life of professional frustration, personal isolation, and nothing short of hate-sex—he’s started seeing his predecessor Natalie, a woman he despises, for what is just furious, desperate fornication. What emerges throughout the hour is that Caputo’s fatal flaw is that he sees himself as a “good guy,” when in fact, all he’s doing is waiting for the world to give him something in return—the gold medal in exchange for heroism, the blue ribbon award for showing up. The problem is not just that he believes he should be a hero; the problem is that he believes he deserves something special for being that hero. And the bigger problem, the show appears to posit, is that the mingled cause and effect of heroism and rewards is what furnishes that other stocked room, the one the Litchfield inmates do not live in.

Of late, there has been a lot of writing about the phenomenon of the nice guy. Sarah Nicole Prickett wrote in n+1 an illuminating and eviscerating profile of Elliott Rodger, the Santa Barbara sorority killer, who left behind 107,000 words emphatically insisting that he was owed a pretty girl. Michael Tedder, who wrote in Pitchfork about the disturbingly violent lyrics of all-around nice-guy Ed Sheeran, unpacking what sounds like syrupy sentiment into what it really is: angry, resentful entitlement. Amanda Marcotte wrote on the topic from two different angles: The culture surrounding pick-up artists and the discourse of the friend zone, and she concludes:

There’s a relentless drumbeat of messages targeting young men that amount to framing sex not as an activity two people enjoy together for their own reasons, but as a commodity that women possess and dole out based on a metric that is viewed as “unfair”.

As I wrote in my review of this season, “Orange Is The New Black” is a show fixated on empathy, and in many ways, that is mostly what this dedication to the nice guy is. But the show is also a show plugged into—and often rewriting—the cultural politics of our era, from trans rights to prison reform. In its third season, “Orange Is The New Black” offers up not just an array of male experience, but an array of male frailty; the subversive mission of the show finds ways to lay bare the strength of its women as it exposes the weaknesses of the men. And over and over, what lies at the heart of the men it explores is a stubborn entitlement that makes itself known in a variety of ways. It helps that the men in the show are also almost definitively figures of power, as most are COs. But more than that, it’s clear that “Orange Is The New Black” wants to dissect this myth of male entitlement, and examine not just its prevalence but also its roots, its resilience, and its close relationship with masculinity.

It’s most violent in “Donuts”—CO Coates, the new officer who finds in Pennsatucky an object for his sudden fits of rage that manifest in a desire to heedlessly hurt and possess. It’s most pathetic, perhaps, in Pornstache, who is holding onto a fantasy of Daya (Dascha Polanco) and her unborn child as a way to survive prison. In the first two seasons, Bennett used his real feelings for Daya as a way to justify a horribly unequal relationship that put her in an impossible situation. By season three, he gets to a place of recognizing his own fantasies; of course, because he is not an inmate—and he’s not that considered, all told—he ditches one form of entitlement for another, and disappears into the distance, riding a pick-up truck.

As is typical, at this point, for “Orange Is The New Black,” nothing quite ends on a happy note. Caputo learns that he is not a nice guy, and instead of trying to be a nicer guy, ends up embracing his rottenness. Pennsatucky escapes Donuts, but he has his pick of other targets. Neither Pornstache nor Bennett can honor Daya’s wishes, and her daughter, who goes home to stepdad Cesar, ends up with Child Services.

But above all, the most profoundly upsetting story is that of Healy, one of the prison’s counselors. He’s an incompetent, emotionally stunted man, and though this season we discover more details as to why, all that information doesn’t vindicate him. In some ways, it just makes his selfishness even worse; he should have more compassion than he does, but he can’t seem to access it. Throughout the season, he both dallies in some fraught emotional intimacy with Red (Kate Mulgrew) and slowly makes Soso’s life harder and harder, without the slightest sense of being contradictory; in both avenues, what he seeks more than results is purely validation. Validation that he is doing the right thing, the good thing, the best thing. The humane thing, perhaps. His niceness cloaks racism, homophobia, misogyny, and above all, desperate and sad entitlement, enacted by toying with the inmates unconsciously, to either hurt or help them to his satisfaction.

It’s hard to find empathy for him, and yet the show has it for him in spades—revealing him in all of his weaknesses, ferreting out the heart of the little boy who tried to make his mentally ill mother happy. His flashbacks to his childhood bookend the season—there are just two, one in the premiere, and one in the finale. It’s a chilling start and end to his character—one that implies a persistence to his damage, a full circle of his dysfunction. The audience is left with nothing except the slow dread of wondering who he will project his frustrations on next.