Our lonely binge-watching summers: Searching for signs of connection in "Orange Is the New Black" 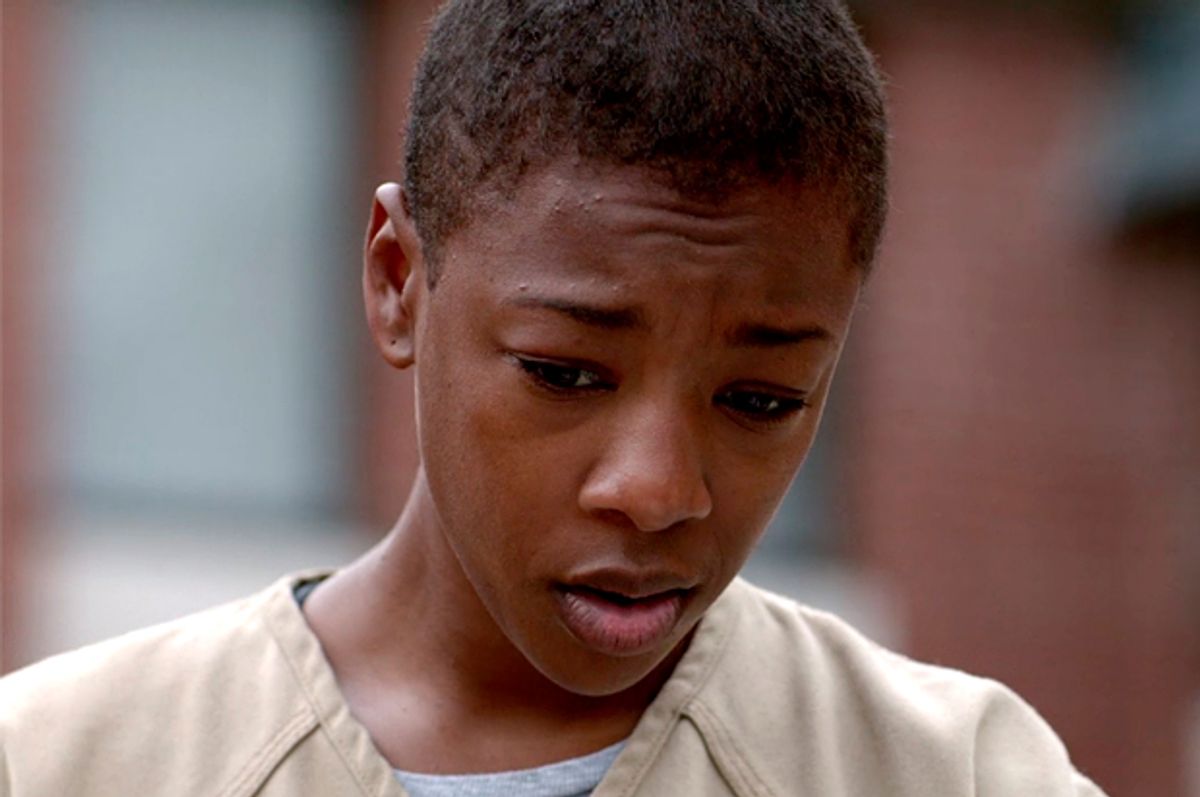 Samira Wiley in "Orange Is the New Black" (Netflix)
--

I was thrilled to watch the new season of “Orange is the New Black” last weekend after nearly a year of wondering what sort of shenanigans the ladies of Litchfield would get into next. But I quickly learned season three is all about showcasing individual journeys as the inmates confront and combat a permeating sense of loneliness. [Warning: spoilers from the new season to come — stop reading if you don't want to know.]

“You can’t blame her for wanting to escape,” says Poussey in episode 7, while Suzanne ("Crazy Eyes") pens her expansive "The Time Hump Chronicles," a serialized outrageous fantasy-erotica story that goes analog-viral throughout the prison. “It’s lonely as fuck in here.”

Throughout the new season of “OITNB” we see the characters dealing with loneliness and loss of faith in myriad ways. Morello begins obsessively writing men interested in female prison inmates after Nicky, her closest friend and former lover, is sent away to maximum security. She corresponds with one-two-three-four men, but it’s little more than a holiday for a broken heart as she dupes them into funding her commissary account.  She finally hits it off with an Italian guy named Vince — but of course she's still obsessed with Christopher, the near-stranger she stalked on the outside. Vince proves his devotion (and deviancy) by beating up Christopher for her, and the couple put a bandaid on Morello’s fractured sense of self by marrying at the end of the season.

Leanne and other inmates turn to Norma for spiritual guidance and purpose, calling her a miracle worker based on what they believe to be the powerful effects of her “blessings.” These blessings come in the form of a meaningful look or reassuring shoulder squeeze, but the power of human affection and interaction is incredible -- almost enough to make you believe in something.

Soso’s depression is largely dismissed, leading to bad advice from her counselors, lazily-prescribed medication, and culminating in a near-fatal overdose. After accepting that she’s different from the other inmates who she desperately tried to befriend, it’s heartbreaking to watch a young spirit give up.

Most powerful for me though, was Pennsatucky’s history of sexual abuse and brief encounter with what seemed like love. For the first time we see a facet of the former meth addict that isn’t angry or sanctimonious. We see a young girl exposed to love for the first time, the kind that you’d rather go deaf, dumb and blind for than lose. It unfortunately doesn’t last and she learns to blame herself for her effect on men, resigned to be alone.

I made it through the entire season last weekend, binging like Litchfield's inmates (and staff!) did on Suzanne's spaced-out erotica. Apparently, that's not without its risks. A January study conducted by the University of Texas at Austin suggests the more depressed or lonely a person is, the more likely they are to binge-watch television. And binge-watching in the summer, when the sun is shining and people aren't supposed to be experiencing seasonal affective disorder, can feel even less natural than holing up inside for hours on end in the winter. Natural light therapy, for example, is abundant.

Summertime SAD, however presents with a loss of appetite and insomnia, and scientists aren’t quite sure how to treat it. But some suggest staying inside under cool conditions may help. The situation is, well, depressing, and it’s easy to see how a cycle can be created: insomnia can lead to late night television-binges, which can then exacerbate feelings of loneliness and isolation, which lead us to delve deeper into identifying with narratives of loneliness.

Take Sharon Van Etten’s recent “I Don’t Want to Let You Down” EP, which explores lingering loneliness via steady piano and reflective lyrics. “Disappear when the sun goes down / I sit still as you breathe / Turn around, stare at my world / Come to my mind, breathe it out” sings Van Etten in “Just like Blood.” The sense of isolation is reinforced in “I Always Fall Apart” with the line “You turned me into a museum,” the effect being, “yeah, I’ll still be here if you ever want to come back.”

Loneliness presents itself in the form of emotional purgatory within paradise in Jonathan Safran Foer’s most recent fiction piece in “The New Yorker.” Foer examines Adam and Eve’s relationship in “Love is Blind and Deaf” and presents myriad misconnections amidst cohabitation. He can’t see and she can’t hear, which sets the couple up not to complement one another -- rising and falling like lungs -- but to be unable to understand what it was they were doing, despite the infinite knowledge made available to them.

Foer describes their course of actions, which seem to align with many contemporary attempts at relationships: fight a little bit, retreat into yourself, hope that new words and practices like “marriage” remedy the situation, conceive a child. Ultimately the burden becomes too much for the characters as they pray, “Diminish me until I can bear it.”

“It worked until it didn’t,” writes Foer as he describes the distractions the first man and first woman created to avoid one another. “They were always inventing new ways not to be aware of the canyon between them.”

The nadir of loneliness doesn’t seem to be when a person is left to themselves with their memories, but rather when longing for something else while someone lies next to you. Pop culture is fixated on this theme, and the questions of “what if?” coupled with thoughts of what almost happened, what could have, and what didn’t.

Alienation comes in different forms of prison, and we shackle ourselves to the hope that something or someone will allow us to forget about it for a while. At the end of the day, it seems not that misery loves company  — don't we have enough of that already? We seek comfort instead.