The ethics of the embryo heats up: Is it property or a "potential child" — and who decides? 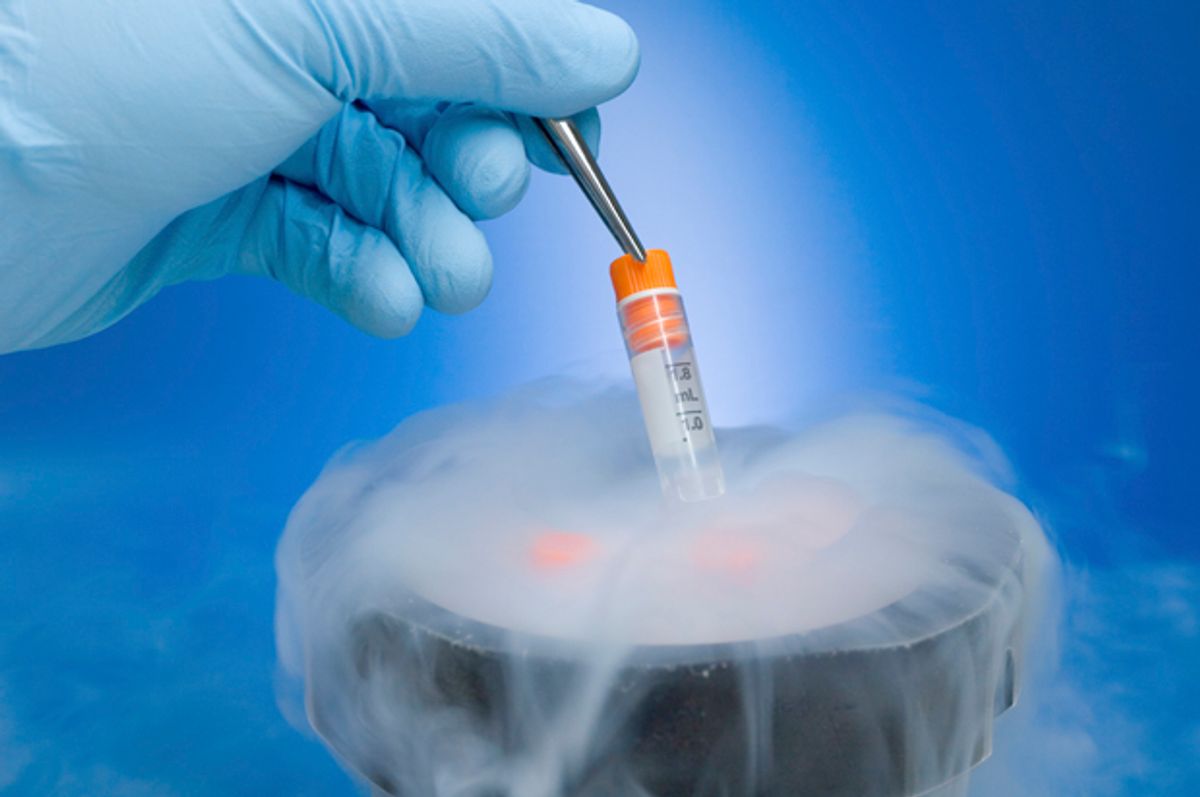 The majority of us now have spent most, if not all, of our lives in a world in which we understand that making babies is not always a story of, "When a man and lady care for each other very much…" Decades of reproductive advancements have changed the way we thing about the process of becoming a parent. But with those advancements come big ethical questions. As a Wednesday feature in the New York Times reveals, there are now up to one million unused fertilized embryos sitting on ice in storage facilities all over the United States. What do we do with them — and who gets to decide?

As Tamar Lewin reports, the laws current surrounding ownership of embryos -- and how to handle unused ones -- range from murky to inconsistent to practically nonexistent. This spring, Sofia Vergara's former fiancé Nick Loeb made headlines when he went public with his fight to obtain the embryos he and his famous ex made when they were planning on spending their lives together, asking, "A woman is entitled to bring a pregnancy to term even if the man objects. Shouldn’t a man who is willing to take on all parental responsibilities be similarly entitled to bring his embryos to term even if the woman objects?" In such disputes, defining what embryos are is a tricky matter — are they a couple's property, human lives, or something not yet classified?

But the sticky issues surrounding embryos aren't restricted to couples who've broken up. Lewin introduces us to the Watts, Christian parents who've successfully had two pregnancies that produced four children via an egg donor and insemination. When left with six more embryos they weren't going to use, they wrestled with what to do with them before searching on Facebook for another couple "to donate to an amazing family who wants a large family." They found Rayn and Richard Galloway. Last month, three embryos were transferred to Mrs. Galloway — and she's now successfully pregnant with one child.

The Watts are part of a skyrocketing population of embryo donors — in 2013 there were over a thousand donated embryo transfers, double the number of just four years before. Yet even in the ranks of seemingly straightforward altruism, there's controversy. While businesses like Florida's Embryo Donation International work with families of varied configurations, the Tennessee-based National Embryo Donation Center places embryos "only with heterosexual couples married at least three years — and only after a home study exploring their readiness to be parents." In Davis, meanwhile, a program called California Conceptions buys eggs and sperm from donors who fit a desirable profile, and creates embryos not for specific clients but customers willing to purchase them less expensively off the rack, knowing they'll be used by multiple families. Los Angeles lawyer Rose Kesten Ponde admits, "I do see the appeal of a cheaper approach, but for me, there’s a huge 'ick' factor with the company owning the embryos, and I worry about the slippery slope."

Most incredibly of all, Lewin says that some families, "troubled to be destroying a potential child," have come up with a unique method of disposal — a "compassionate transfer" in which a doctor returns the embryos to the womb of the woman whose egg was used, at a time of the month she can't become pregnant.

But for all the families working thorough their own methods of dealing with those embryos, there are likely hundreds of thousands of embryos out there that the people who made them don't know how to handle. They are the ultimate languishing in storage story, costing their creators between $300 and $1,200 a year to not address. Columbia University’s Center for Women’s Reproductive Care's Dr. Mark V. Sauer tells the Times, "Couples don’t always agree about the moral and legal status of the embryo, where life begins, and how religion enters into it, and a lot of them end up kicking the can down the road." Those cans add up. We now have a population of unused embryos that rivals that of Austin or San Jose. Bauer says, "If I ask what they’ll do with them, they often have a Scarlett O’Hara response: I’ll think about that tomorrow." And as the fertility business booms, for now, so does the storage one.