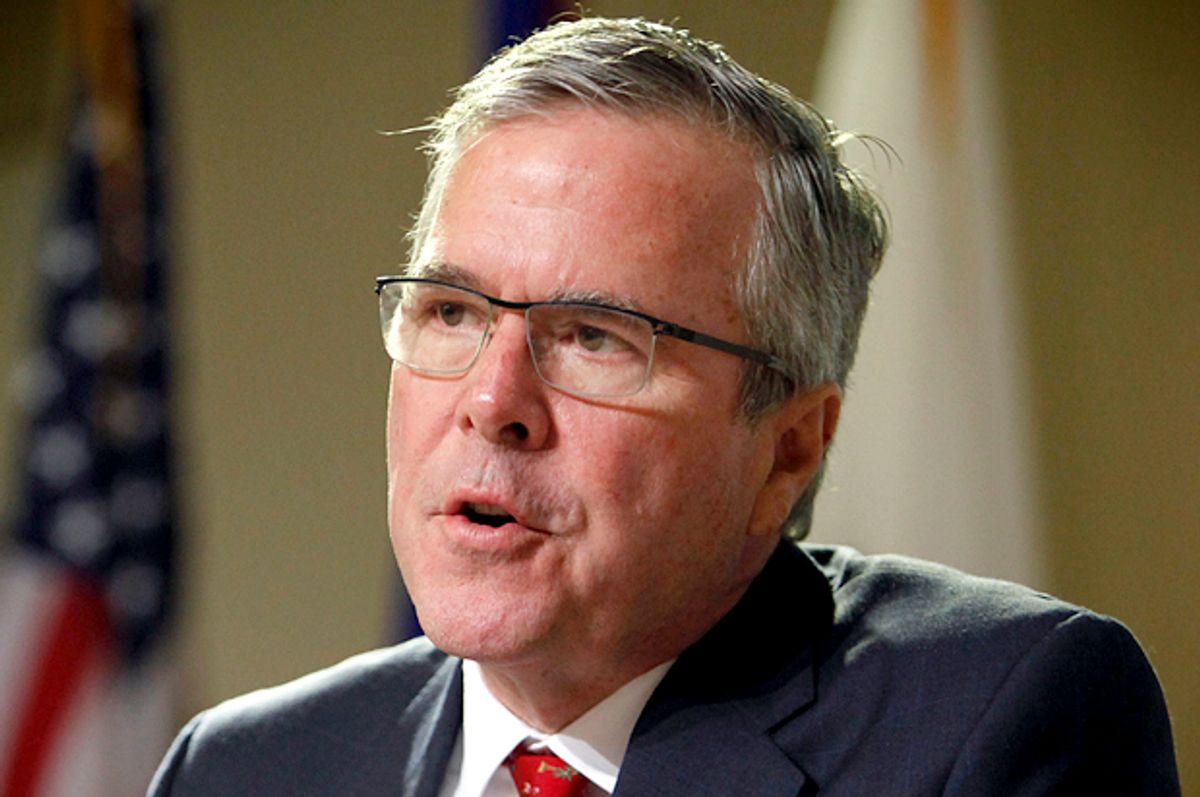 Jeb Bush entered the 2016 race facing a Republican electorate that isn’t quite convinced of his conservative bona fides. He supports some version of immigration reform, which hard-line conservatives consider tantamount to “amnesty.” He unapologetically defends the Common Core education standards, which the Tea Party despises as a big-government attempt to indoctrinate our children. And, of course, Jeb’s brother was a “compassionate conservative” who was a profligate spender during his time in the Oval Office.

Jeb has a lot of work to do to convince conservatives that he is, if not one of them, at least close enough to what they would deem acceptable in a Republican president. And so in his announcement speech, Jeb made the case that he’ll be a good, conservative steward of the economy, and that he’ll usher in a new era of untold prosperity by cutting taxes, slashing spending and gutting regulations – just like he did as governor of Florida from 1999 to 2007.

BUSH: And that will be my goal as president – four percent growth, and the 19 million new jobs that come with it.

Economic growth that makes a difference for hard-working men and women – who don’t need reminding that the economy is more than the stock market.

Growth that lifts up the middle class – all the families who haven’t gotten a raise in 15 years. Growth that makes a difference for everyone.

It can be done.

We made Florida number one in job creation and number one in small business creation. 1.3 million new jobs, 4.4 percent growth, higher family income, eight balanced budgets, and tax cuts eight years in a row that saved our people and businesses 19 billion dollars.

There’s a lot to chew over here, but to put it plainly: Jeb is full of it. Confident predictions of 4 percent annual growth and “19 million new jobs” sound great, but they’re exceedingly rare and difficult to achieve. Of the last four two-term presidents (Obama included), the only one who will have surpassed the 19 million mark for job growth is Bill Clinton. As for 4 percent economic growth, it’s equally as elusive. “In the past 30 years,” writes Quartz’s Tim Fernholz, “the US has only hit that number during the late 1980s, after a major tax overhaul and a boost from the Savings & Loan bubble, and during the late 1990s, during the height of the tech bubble.”

The word “bubble” should jump out at you in that passage, because that’s what Jeb is actually talking about when he boasts of his economic record. The growth in his state that Jeb likes to take credit for is largely attributable to the housing bubble of the mid-2000s, which was far more pronounced in Florida than it was in the rest of the country, and which left the state in financial ruin when it popped just after Jeb left office.

The Washington Post reported yesterday that “a significant amount of Florida's economic and job growth in the Bush era was driven by a massive run-up in housing prices -- which peaked in Bush's last year in office, then plunged the state into a worse recession than the nation as a whole.” Just how much of the Jeb Bush economic miracle was built on the precariously inflated housing market? “When you account for the role of housing,” the Post found, “Bush's economic record looks a lot more mixed. Almost all of the gains he talks up today, including three-fifths of the job creation, were wiped out in the four years after he left office, once the bubble burst.” Jeb would love for you to believe that the boom he presided over was the product of strong conservative governance, when it was largely a case of good timing and epic bullet-dodging.

But even if you were to grant Jeb full credit for everything he claims to have done, he’s still presenting a misleading and highly sanitized (to the conservative view) portrait of his economic record. Last month, the Tampa Bay Times’ Adam Smith put together a detailed look at the finer points of Jeb’s economic legacy that he’d rather not discuss, like higher spending and growing debt – things that typically get Tea Partyers worked into a frothy rage.

So Jeb’s just going to glide past all that and keep promoting tax cuts as the engine for economic growth as a way to reassure conservatives that they can trust him with economic policy. In his announcement speech, he promised to cut tax rates for everyone in order to get the country “back on the side of free enterprise and free people.” As Bloomberg’s Jonathan Bernstein points out, the GOP field is already stuffed with candidates who’ve proposed crazily irresponsible tax cuts, which means Jeb will likely go even bigger in order to prove to the right that he’s really, truly one of them. In the meantime he just has to hope that nobody who doubts the Jeb Bush formula for economic growth takes too close a look at his record.