Call it what it is: The Charleston shooting is domestic terrorism 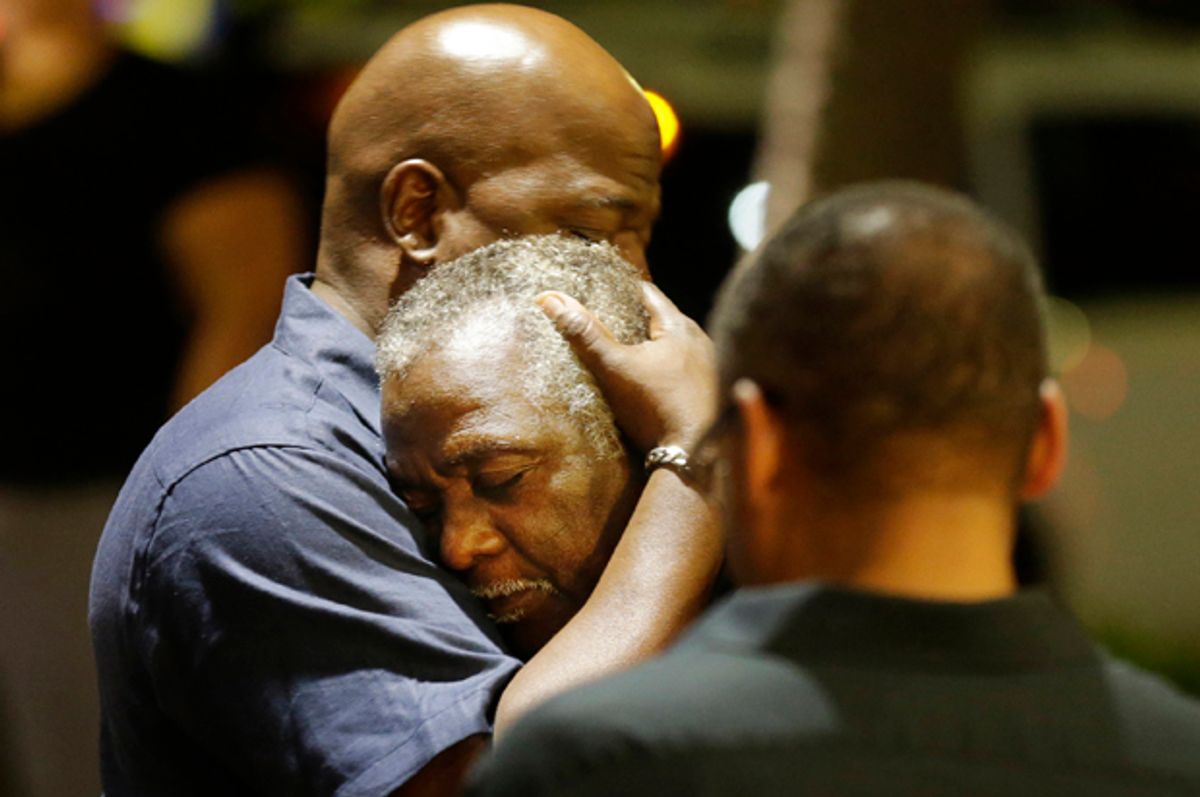 Worshippers embrace across the street from the scene of a shooting at Emanuel AME Church, Wednesday, June 17, 2015, in Charleston, S.C. (AP/David Goldman)
--

As the harrowing story of the Wednesday shooting deaths of nine people at Charleston's historic Emanuel African Methodist Episcopal Church by a white suspect is still unfolding, much of the early reporting has acknowledged what Charleston police Chief Greg Mullen said Thursday morning, that "I do believe this was a hate crime." Yet there's also, enragingly, already been the typical downplaying and misdirection that so often emerges in these types of crimes. So let's look at and remember the facts — a white man opened fire in a black church and murdered nine people, in a state where the Confederate flag still flies over the capitol. A cousin of one of the victims told reporters that a survivor told her the suspect said, "I have to do it. You rape our women and you're taking over our country. And you have to go." Let's start from there.

But right on time, Fox was swift to trot out African American minister E.W. Jackson, who cautioned that "Most people jump to conclusions about race." Host Steve Doocy observed, "Extraordinarily, they called it a 'hate crime,' and some look at it as, 'Well, because it was a white guy and a black church,' but you made a great point earlier about the hostility towards Christians. And it was a church. So maybe that’s what they were talking about. They haven’t explained it to us." Sure, maybe this is a "War on Christians" thing. And USA Today, searching for patterns in "deadly rampages," ran a report called Behind the Bloodshed and observed, "A mass killing often involves a failed safety net: protective orders that didn't work, gaps in the mental health system, lapses in immigration enforcement."

But as an astute Facebook commenter noted, "This story claims that one of the reasons for increased mass killings is a lapse in immigration control... yet, NONE of the mass killings given as examples, supposedly the worst since 2006, were perpetrated by some one that was an illegal immigrant?" Indeed, only one of the mass murderers mentioned in the feature — Virginia Tech killer Seung Hui Cho — was not born in the US. He did however have permanent resident status, so his crime was not a failure of immigration control. The actual Behind the Bloodshed report cites a single case of a mass shooter who was an immigrant the US had unsuccessfully tried to deport — Binh Thai Luc, who killed five people in San Francisco in 2012 in what has been speculated to have been a gang related incident.

Points also to the USA Today report for saying, "Both men and women commit mass killings," above a statistic that 94 percent of them are committed by men. But sure, let's look at a trove of mass shootings and talk about immigrants, and "both men and women."

Every horrible, gut twisting crime of this sort is its own unique tragedy. But as a colleague asked Thursday morning, "Haven't we been here before? This is not Aurora. This is Birmingham." The New York Times reported just earlier this week, "Right-wing extremists averaged 337 attacks per year in the decade after 9/11, causing a total of 254 fatalities." That's not a failure of immigration law, or an attack on Christianity, or anything else that fits into a convenient to conservatives narrative. This is what hate looks like. This is what terrorism looks like. And as the Times notes, "Right-wing, anti-government extremism is the leading source of ideological violence in America."