Charleston church massacre: The violence white America must answer for

Where are the white fathers? When will white leaders step up? Charleston reveals our racial double standard 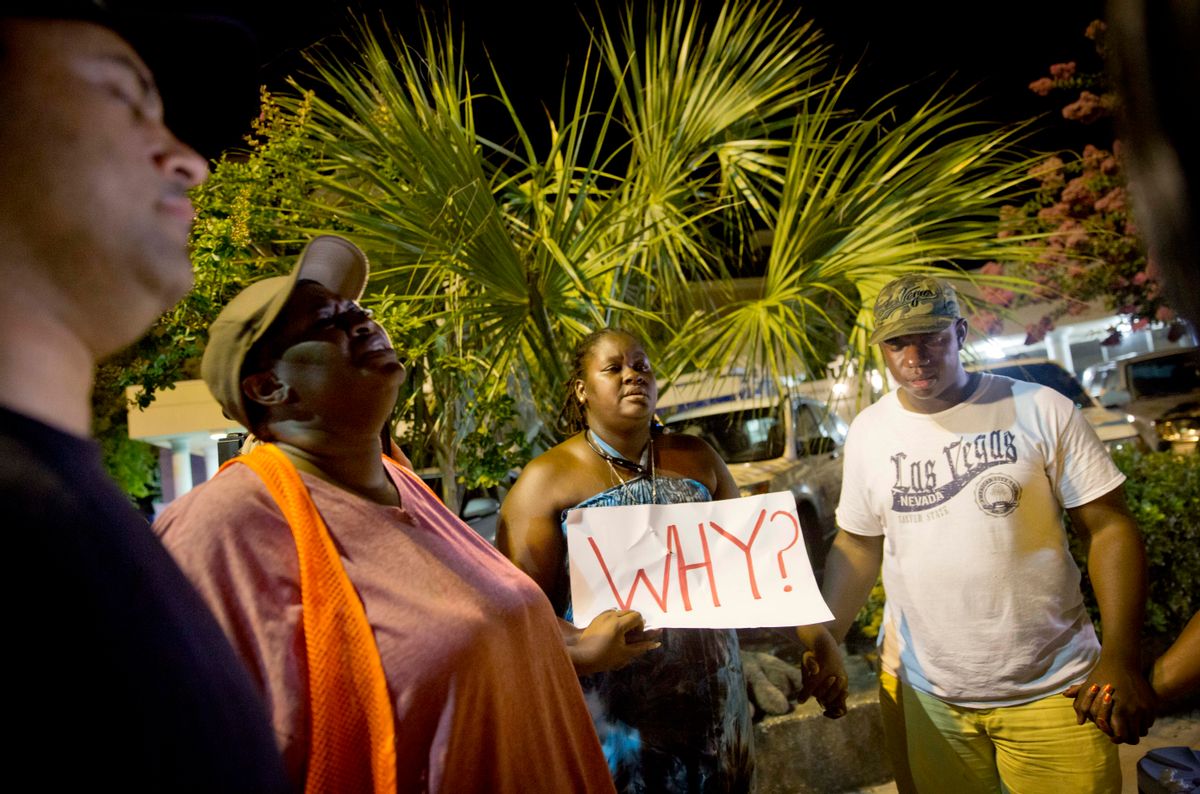 The historic African-American Emanuel African Methodist Episcopal Church was assaulted by at least one white gunman on Wednesday evening in Charleston, South Carolina. At least nine people have been confirmed dead.

The story is still developing. At present, Charleston authorities are reporting that this mass shooting and likely right-wing domestic terrorist assault is a hate crime.

While this horrific event is one more murderous and racist blow to the African-American community in Charleston--the killing of Walter Scott by a white thug cop being the most high-profile and recent offense--the reporting on the mass shooting at Emanuel Baptist is an additional affront via the White Racial Frame as practiced by the mainstream news media.

As shown on MSNBC Wednesday night, a local Charleston reporter asked a group of African-American activists, community leaders what the black community could do to prevent events like the mass shooting at Emanuel Baptist. This bizarre moment continued with the reporter seemingly rejecting the obvious--that racism is an obvious element in the white-on-black murders committed at Emanuel Baptist--and doubling down by suggesting that the black community gives comfort to "snitches," thus wondering if black folks will in fact turn in a white domestic terrorist who had killed at least nine people.

The headline on the breaking news report about the Charleston shooting was an additional example of how the White Racial Frame dominates news coverage. MSNBC's screen read "Police searching for 21-year-old suspect." He was not described as "white": the American news media is much more likely to racially mark black and brown suspects in crimes, and to include their racial description (or religious/ethnic as in the ubiquitous "Arab" or "Muslim" "terrorist."

To watch such a series of questions being asked to a community that only several hours ago suffered a viciously violent terrorist attack is wholly unbelievable. Yet somehow black Americans are so disrespected, derided and associated with criminality that they are responsible for their own murders by a white domestic terrorist.

White right-wing domestic terrorism is one of the greatest threats to public safety and security in post 9/11 United States of America. Such a plain-spoken fact is verboten in mainstream American public discourse.

As such, there are several phrases and words that are likely to not be used by the corporate news media in the discussions of the Charleston mass murders at the Emanuel Baptist Church.

5. Where are the white fathers in the white home?

6. When will white leadership step up and stop white right-wing domestic terrorism?

Once and again, white privilege is the power to be the ultimate individual where one's actions and behavior rarely if ever reflects on the collective character of white people en masse. By comparison, Black and brown Americans, Muslims, Arabs and the Other more generally are routinely subjected to group punishment and demonization.

White Americans will not have to look in the mirror and ask, "what does it feel like to be a problem." In the aftermath of recurring mass shooting events, and right-wing domestic terrorism, it is essential that they start to practice such acts of introspection in the interest of the Common Good.