It's not about mental illness: The big lie that always follows mass shootings by white males

Blaming "mental illness" is a cop-out -- and one that lets us avoid talking about race, guns, hatred and terrorism 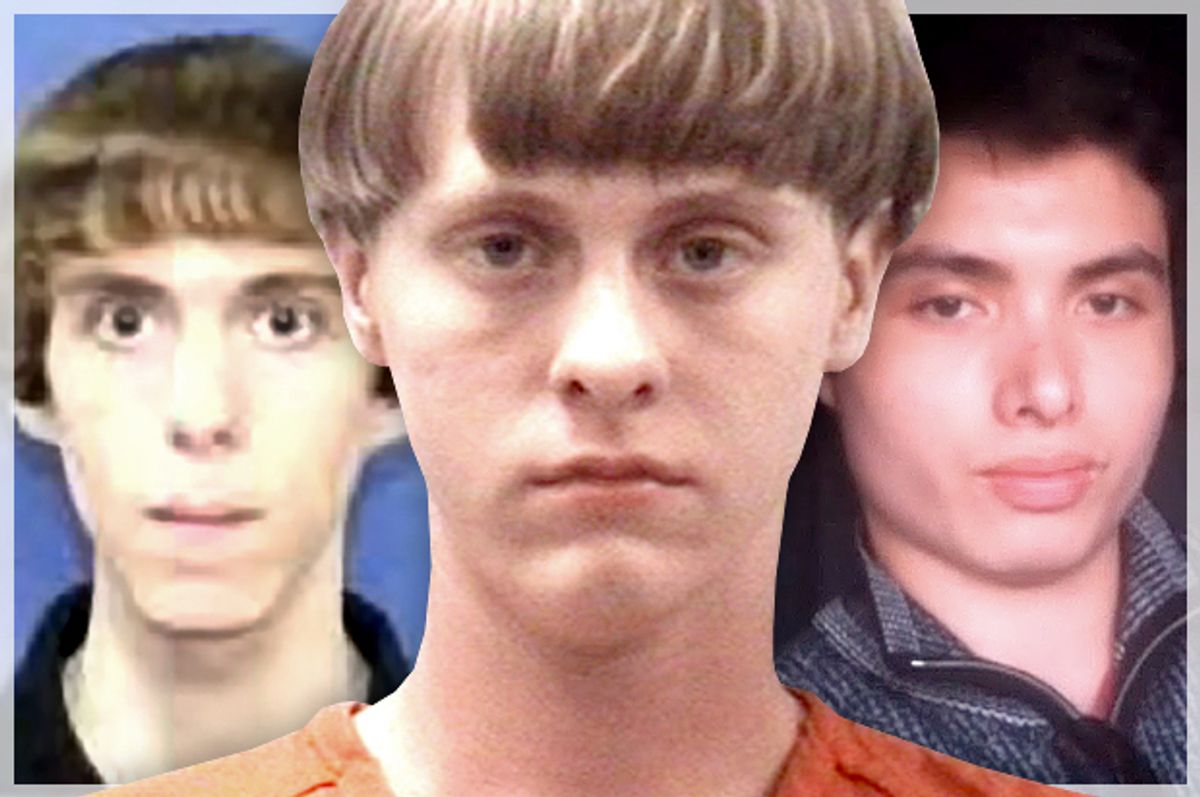 I get really really tired of hearing the phrase “mental illness” thrown around as a way to avoid saying other terms like “toxic masculinity,” “white supremacy,” “misogyny” or “racism.”

We know that the stigma of people who suffer from mental illness as scary, dangerous potential murderers hurts people every single day -- it costs people relationships and jobs, it scares people away from seeking help who need it, it brings shame and fear down on the heads of people who already have it bad enough.

But the media insists on trotting out “mental illness” and blaring out that phrase nonstop in the wake of any mass killing. I had to grit my teeth every time I personally debated someone defaulting to the mindless mantra of “The real issue is mental illness” over the Isla Vista shootings.

“The real issue is mental illness” is a goddamn cop-out. I almost never hear it from actual mental health professionals, or advocates working in the mental health sphere, or anyone who actually has any kind of informed opinion on mental health or serious policy proposals for how to improve our treatment of the mentally ill in this country.

What I hear from people who bleat on about “The real issue is mental illness,” when pressed for specific suggestions on how to deal with said “real issue,” is terrifying nonsense designed to throw the mentally ill under the bus. Elliot Rodger’s parents should’ve been able to force risperidone down his throat. Seung-Hui Cho should’ve been forcibly institutionalized. Anyone with a mental illness diagnosis should surrender all of their constitutional rights, right now, rather than at all compromise the right to bear arms of self-declared sane people.

What’s interesting is to watch who the mentally ill people are being thrown under the bus to defend. In the wake of Sandy Hook, the NRA tells us that creating a national registry of firearms owners would be giving the government dangerously unchecked tyrannical power, but a national registry of the mentally ill would not -- even though a “sane” person holding a gun is intrinsically more dangerous than a “crazy” person, no matter how crazy, without a gun.

We’ve successfully created a world so topsy-turvy that seeking medical help for depression or anxiety is apparently stronger evidence of violent tendencies than going out and purchasing a weapon whose only purpose is committing acts of violence. We’ve got a narrative going where doing the former is something we’re OK with stigmatizing but not the latter. God bless America.

What’s also interesting is the way “The real issue is mental illness” is deployed against mass murderers the way it’s deployed in general -- as a way to discredit their own words. When you call someone “mentally ill” in this culture it’s a way to admonish people not to listen to them, to ignore anything they say about their own actions and motivations, to give yourself the authority to say you know them better than they know themselves.

This is cruel, ignorant bullshit when it’s used to discredit people who are the victims of crimes. It is, in fact, one major factor behind the fact that the mentally ill are far more likely to be the targets of violence than the perpetrators--every predator loves a victim who won’t be allowed to speak in their own defense.

But it’s also bullshit when used to discredit the perpetrators of crimes. Mass murderers frequently aren’t particularly shy about the motives behind what they do -- the nature of the crime they commit is attention-seeking, is an attempt to get news coverage for their cause, to use one local atrocity to create fear within an entire population. (According to the dictionary, by the way, this is called “terrorism,” but we only ever seem to use that word for the actions of a certain kind -- by which I mean a certain color -- of mass killer.)

Yes, whatever mental illness he may have had contributed to the way his beliefs were at odds with reality. But it didn’t cause his beliefs to spring like magic from inside his brain with no connection to the outside world.

That’s as deliberately obtuse as reading the Facebook rants of a man who rambled on at great length about how much he hated religion and in particular hated Islam and deciding that the explanation for his murdering a Muslim family is that he must’ve just “gone crazy” over a parking dispute.

Now we’ve got a man who wore symbols of solidarity with apartheid regimes, a man who lived in a culture surrounded by deadly weapons who, like many others, received a gift of a deadly weapon as a rite of passage into manhood.

He straight-up told his victims, before shooting them, that he was doing it to defend “our country” from black people “taking over.” He told a woman that he was intentionally sparing her life so she could tell people what he did.

There is no reasonable interpretation of his actions that don’t make this a textbook act of terrorism against black Americans as a community.

And yet almost immediately we’ve heard the same, tired refrain of “The real issue is mental illness.”

Well, “mental illness” never created any idea, motivation or belief system. “Mental illness” refers to the way our minds can distort the ideas we get from the world, but the ideas still come from somewhere.

One of the highest-profile cases of full-blown schizophrenia in history is that of John Nash, who, unlike the vast, vast majority of mentally ill people, really did develop a whole system of delusions entirely separate from reality. And yet even then the movie A Beautiful Mind whitewashes what those beliefs actually were--when he came up with an all-powerful conspiracy that was monitoring his every move, that conspiracy by sheer coincidence was a conspiracy of the world’s Jews.

Was it just sheer bad luck for Jewish people that a random genius’ random fertile imagination made them into demonic villains? Or did he get that idea from somewhere?

Misogynistic rants that exactly match Elliot Rodger’s are just a Google search away, if you have a strong stomach. So are racist threats that exactly match Dylann Roof’s. Are all those people “mentally ill”? And if so is there some pill you could distribute to cure it?

Dylann Roof is a fanboy of the South African and Rhodesian governments. As horrific as Roof’s crime was, the crimes that occurred over decades of apartheid rule were far, far worse, and committed by thousands of statesmen, bureaucrats and law enforcement officials. Were all of them also “mentally ill”? At the risk of Godwinning myself, John Nash wasn’t the only person to think the Jews were a global demonic conspiracy out to get him--at one point in history a large portion of the Western world bought into that and killed six million people because of it. Were they all “mentally ill”?

But the “crazy” ones always seem to have a respectable counterpart who makes a respectable living pumping out the rhetoric that ends up in the “crazy” one’s manifesto--drawing crosshairs on liberals and calling abortion doctors mass murderers--who, once an atrocity happens, then immediately throws the “crazy” person under the bus for taking their words too seriously, too literally.

And the big splashy headliner atrocities tend to distract us from the ones that don’t make headline news. People are willing to call one white man emptying five magazines and murdering nine black people in a church and openly saying it was because of race a hate crime, even if they have to then cover it up with the fig leaf of individual “mental illness”--but a white man wearing a uniform who fires two magazines at two people in a car in a “bad neighborhood” in Cleveland? That just ends up a statistic in a DoJ report on systemic bias.

And hundreds of years of history in which an entire country’s economy was set up around chaining up millions of black people, forcing them to work and shooting them if they get out of line? That’s just history.

The reason a certain kind of person loves talking about “mental illness” is to draw attention to the big bold scary exceptional crimes and treat them as exceptions. It’s to distract from the fact that the worst crimes in history were committed by people just doing their jobs--cops enforcing the law, soldiers following orders, bureaucrats signing paperwork. That if we define “sanity” as going along to get along with what’s “normal” in the society around you, then for most of history the sane thing has been to aid and abet monstrous evil.

We love to talk about individuals’ mental illness so we can avoid talking about the biggest, scariest problem of all--societal illness. That the danger isn’t any one person’s madness, but that the world we live in is mad.

After all, there’s no pill for that.