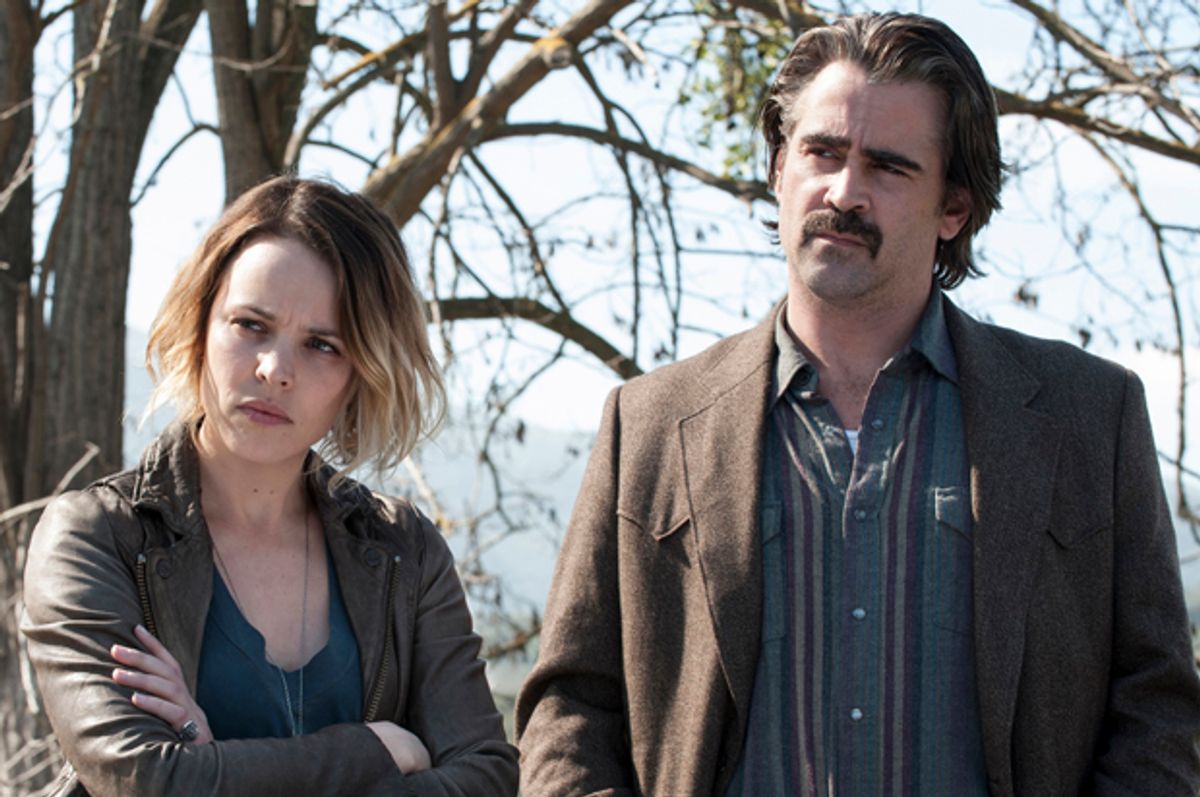 Among the jobs I'm glad no one handed me is to be the creator of a much-adored, obsessively dissected show trying to follow up its original success without relying on its original cast, setting, storyline, or stable of directors. That’s exactly what writer and showrunner Nic Pizzolatto and his team are trying to do with the second season of “True Detective,” which premieres Sunday night on HBO with a pilot directed by Justin Lin of “The Fast and the Furious” franchise. After watching the new season’s first three episodes, I'm both missing last season and hopeful that the second will blossom into something interesting, if more conventional. So far it's intriguing, at the very least.

“True Detective”’s opening season set the bar pretty high, and also delivered a riveting performance by Matthew McConaughey that surpassed even the excellent and wide-ranging work he was doing at the time. Some viewers found the show’s emotional heaviness and McConaughey’s half-brilliant, half-wacked monologues trying or excessively portentous. But if this stuff works for you – if noir is not just about blood and bad guys, but a deeper sense of dread, a precariousness to the human condition – “True Detective” was about as good as it gets. And despite flashbacks and complicated characters – we spent part of the show trying to figure out McConaughey's addled cop and his relationship to Woody Harrelson’s detective – the plot was mostly pretty linear. For all its southern-Gothic verbosity, the show was lean and mean most of the way through.

Season two, by contrast, is full of characters, subplots and geographic shifting. (Even a Californian will have trouble figuring out where they are in some scenes.) Instead of two cops, this season places four very different characters at the center of the action, all of them pulled together by the disappearance of a sexually twisted city official named Ben Caspar, a key player in a plan to quietly buy land along the line of a proposed high-speed rail venture. Vince Vaughn’s character – a brutal, bullying casino mogul named Frank -- was financial partners with Caspar, and the death both threatens his deal and makes him wonder if someone is also after him.

Though Pizzolatto and Lin hand out a number of held shots and intelligent dialogue – this is not just cops and robbers stuff -- the existentialism from the opening season gets shoved aside by complicated plotting.

Trying to unravel all of this are three detectives from various (and warring) outfits. Ray Velcoro (Colin Farrell) is a “burnout” cop and a mess in about five different ways, with an estranged ex-wife whose rape years ago sent him on a tailspin, a son who may not be his, a major rage problem, and a professional record that is tattered at best. “I welcome judgement,” he says early on.

Ray drinks too hard, except when he doesn’t: “Booze takes the edge off,” he says, sipping a glass of water in a bar with Frank. “I want to stay angry.” At least he’s found something that he’s good at.

Also on the case is Ani Bezzerides (Rachel McAdams), a very tough, effective, unsentimental detective raised by a New Age dad; she’s driven by demons and now packs knives to protect herself. Taylor Kitsch’s Paul Woodrugh, a former mercenary at a Blackwater-like security firm in the Middle East, is a cop who feels most at home on the back of a motorcycle. He spends a lot of time approaching prostitutes on the street and low-lifes at night clubs trying to get to the bottom of things. Got all that?

All three of this haunted trio are excellent in their roles, with Kitsch, who has been in a number of bad action movies, the biggest surprise. He underplays here just right. While Vaughn’s Ray has some depth to him – he’s as messed up as the rest of them, with an alcoholic father who locked him in the basement while he drank – he doesn’t quite have the chops of the other three. Still, Vaughn's a convincing brooder and does not embarrass himself in a rare heavy-dramatic role.

A character of sorts, at least potentially, is the city of Vinci, an industrial sweatshop of a burgh with fewer than 100 inhabitants, a casino, and a host of slithering public officials. You sort of wonder what David Simon of “The Wire” could do to with this.

Season two’s premise flows a bit easier when you’re watching it, but there’s a lot of explication and backstory to the first couple episodes, especially. Are there intellectual stakes, as there were with the opening season? Is there a larger critique of excessive wealth, or irresponsible parenting, or something, running behind all this? So far, it's hard to tell.

Maybe to those who live in the Louisiana bayou, or who have read all of James Lee Burke’s Southern-noir novels, found the setting of the opening season all too familiar. But for most of us, it was distinctive, freshly weird and beautifully photographed, with its humid air and deep greens.

And while Southern California is a complex and fascinating place in its own right, and much of its culture and geography has not been mined for film and television, I seem to vaguely remember that there have been at least a few cop shows and noir films shot in the vicinity. Pizzolatto and company do their best to avoid the most egregious clichés of the glamorous L.A., and they capture the region’s weird industrial underbelly (based vaguely on the notoriously scandal-plagued city of Bell) and the ugly beauty of the parched landscape and otherworldly freeways (we see a lot of them, often from overhead). But this still seems like well-trod ground.

While the Louisiana season often echoed novels and short stories (Pizzolatto’s roots), this one riffs on TV and movies: “The Rockford Files,” “Chinatown,” various cop shows including “CHiPs” and “Hill Street Blues,” and especially the work of David Lynch, including but not limited to “Mulholland Drive.” (There also may be a hint of Thomas Pynchon’s peerless Southern California novel, “The Crying of Lot 49,” whose plot flows from the death of a real estate mogul and whose bizarre communication system parallels what Pizzolatto has called "the secret occult history of the United States transportation system.") In any case, so many movies and TV shows have been set or shot in greater L.A. that it would be impossible for this to feel like the kind of revelation that made up the debut season.

Is it fair to compare season two to season one – to hold it against the show that its opening eight episodes were some of the most convincingly literary, well acted and just overall head-spinning television ever made? Probably not, but if you call both “True Detective,” it’s hard not to expect us to look at each against the shadow of the other.

By season two's third episode, the data-dump of plot and subplot has slowed a bit, and the characters begin to deepen. This is high-quality television for sure, with some top-notch performances. It may, in the end, leave us pining for the bayou. But with five episodes to go after this initial set-up, it feels like anything could happen. And I want to be along for this rough ride.