A tale of two tweets: Conservatives try to punk Salon, end up getting pantsed by reality

Right-wingers thought they were being so clever by juxtaposing these two tweets. They weren't 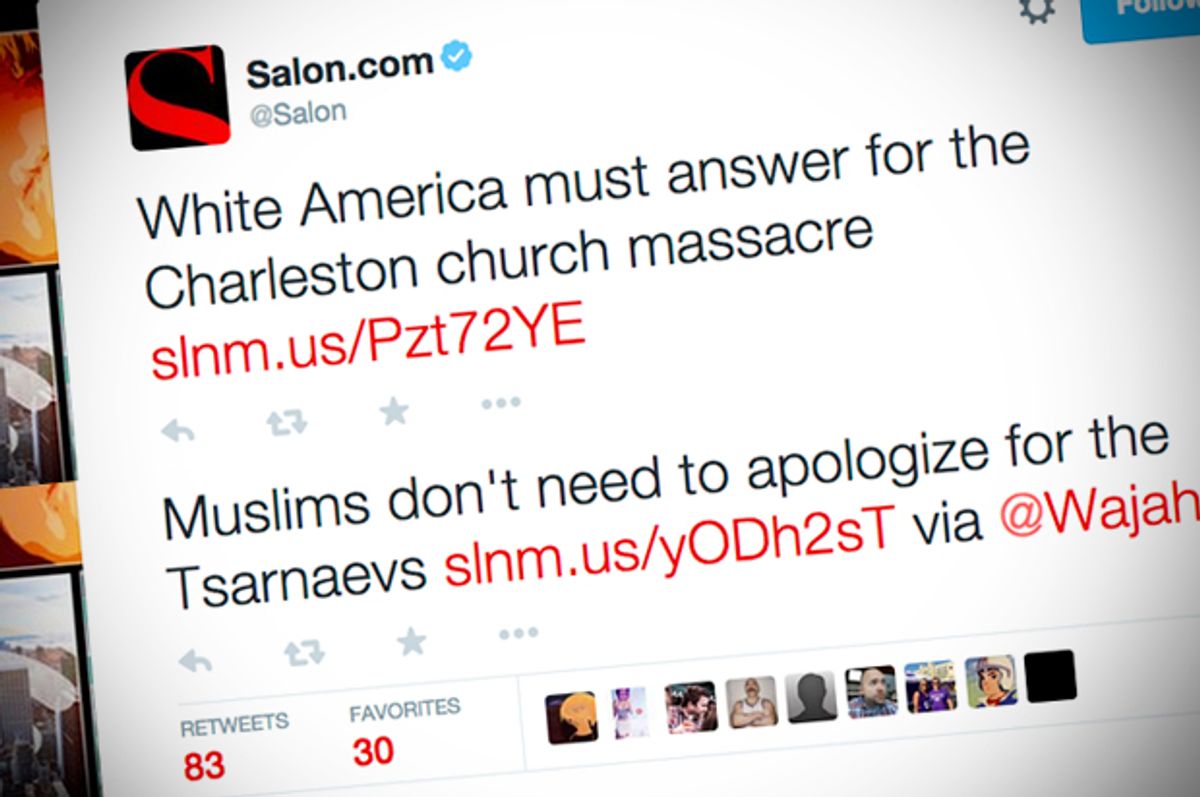 In the wake of the shootings in Charleston, a number of conservative sites took great pleasure in juxtaposing these two tweets by Salon's social media team:

On the one hand, I'm tempted to defend Salon by pointing at the intellectual diversity of its stable of writers and mumbling something about it "containing multitudes" and being inclusive enough to publish both Wajahat Ali and Chauncey DeVega's articles. That'd be a perfectly tenable defense of any publication that doesn't subscribe to the Pravda school of ideological conformity.

But given the unseemly tenor of the criticism -- "stick this in your pipe and smoke it" and the like -- a little ritual humiliation feels in order, because while the words contained in those two tweets are awfully similar, the articles to which they link couldn't be more different.

Wajahat Ali's 2013 article "I am not the Tsarnaevs" concerns the process by which all Muslims are tarred by the likes of Fox News and National Review every time a single Muslim commits an act of terrorism.

"The Tsarnaev brothers’ criminal and perverse actions do not speak for me or the overwhelming majority of Muslims," Ali writes. "I am not compelled to apologize for them or explain their actions. Muslims are not a monolithic, Borg-like collective, who possess a shared consciousness, specializing in counterterrorism knowledge with a telepathic understanding of the perverse mind-set of radicals in their 'community.'"

The logic behind Ali's complaint is simple -- whenever a member of an ethnic minority commits a crime, conservatives immediately declare that person to be representative of the entire community. A black criminal, for example, is never an aberration but must, by necessity, represent all black males. He is also invariably labeled a product of the failures of "black fathers" and "black leaders" and "the black community."

Those are the telltale rhetorical tics of this particular argumentative strategy -- the "fathers" and "leaders" and "community" that allegedly do nothing to stop the scourge within their midst. It's a way to shift the blame from the socio-economical effect of institutionalized racism via the extreme conservative notion of individual responsibility -- i.e. if you can't bootstrap yourself out of abject poverty while the infrastructure comes crumbling down around you, you have no one to blame but yourself.

It's a pernicious, victim-blaming argumentative strategy, but that only makes Bill O'Reilly love it even more, and this is why the smug superiority that accompanied the juxtaposition of the tweets about Ali and Chauncey DeVega's pieces is so undeserved -- all DeVega does in his article is ask "White Americans...to look in the mirror and ask, 'what does it feel like to be a problem'?"

In other words, it mocks the conservative argument by reflecting it back on them. The presence of the aforementioned telltale markers of this strategy in the article's deck -- "Where are the white fathers? When will white leaders step up?" -- should have alerted conservatives to its intent. For that matter, so should another fact also noted in the deck, that the article would examine how "Charleston reveals our racial double standard."

As if that wasn't evidence enough, DeVega turns the rhetorical strategy on its head by using that the exact language that accompanies every atrocity committed by an African-American or Muslim:

It's not as if DeVega's being even remotely subtle here -- and yet conservatives still managed to miss the point. Many of them were outraged by it, demanding to know why they were being blamed for a horrific crime committed by someone they don't know and whose radical agenda they don't share.

But instead of realizing that's the point of DeVega's argument, they'll no doubt just start demanding Muslims leaders be held accountable the next time a follower of Islam commits an act 99.99 percent of the American Muslim community deplores.